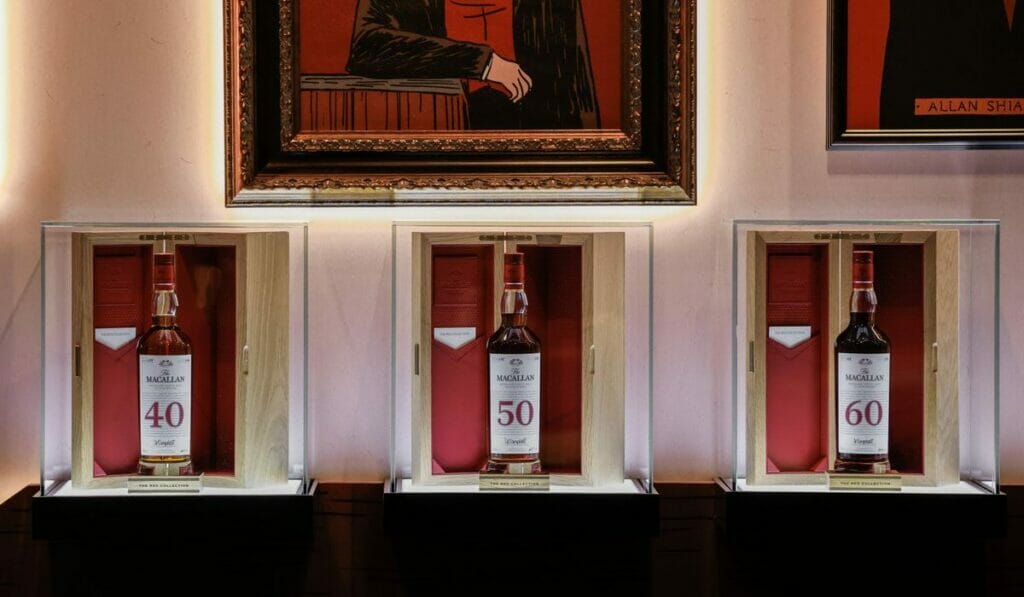 Collectively worth over SGD500,000, the six bottles tell the story of the brand’s legacy, and features some of the oldest expressions ever released by The Macallan
Thursday, February 25, 2021 By Weets Goh

The worlds of art and liquor often intertwine in more ways than one – and now The Macallan has collaborated with Spanish painter and illustrator Javi Aznarez, who has produced an animated film featuring three characters significant in The Macallan’s history: Alexander Reid,  Roderick Kemp and Allan Shiach. Set to music recorded by renowned Scottish violinist Nicola Benedetti, the film celebrates The Red Collection, a range of six age statements that has the 40, 50, and 60 year old labels at its core.

This is joined by a rotating cast of guest releases. The current three guest releases under The Red Collection feature some of the most prized whiskies from The Macallan: its 71, 74, and 78 Year Olds, with the latter two being the oldest bottlings to ever be released by the brand.

Why red? The brand can trace the significance of the colour back to 1824, the year of its founding. The last name of Alexander Reid, The Macallan’s founder, means ‘the red one’ in old Scots, and was a surname associated with people with red hair. In 1903, then-owner Kemp launched The Macallan Choice Old range, which was shipped in red labels; and in 1980, red was the primary colour defining the release of the brand’s then-oldest vintages. The chairman of that time, Shiach, tied red ribbons around the bottlings.

Says Aznarez: “When a brand like The Macallan, which has been making whisky for nearly 200 years, asks you to draw red for them, to explain what red means to them, it’s quite a challenge… I think that The Macallan and I value time very much. I need plenty of time to do my drawings and they need years to achieve the excellence of this whisky.”

Each bottle in The Red Collection features a label illustrated by Aznarez; and only two sets of this exist – one is in the brand’s vaults, while the other has been auctioned off for over SGD1.3 million at Sotheby’s London. Not all is lost for the whisky collector, though. Individual bottles – sans Aznarez’s labels are available for sale, with all six bottles collectively worth over SGD500,000.

Each one comes in an oak presentation box made from the same sustainable oak used to age the whisky. The boxes are lined with soft red leather Scottish upholsterer Bridge of Weir Leather, while a bespoke case from Scottish artisan furniture and objet d’art manufacturer, Method Design Studio, has been created to hold three bottles.

The star of the whole show, though, is the liquid in the bottles, and the ongoing release is hand-finished and signed by The Macallan’s master whisky maker, Kirsteen Campbell.