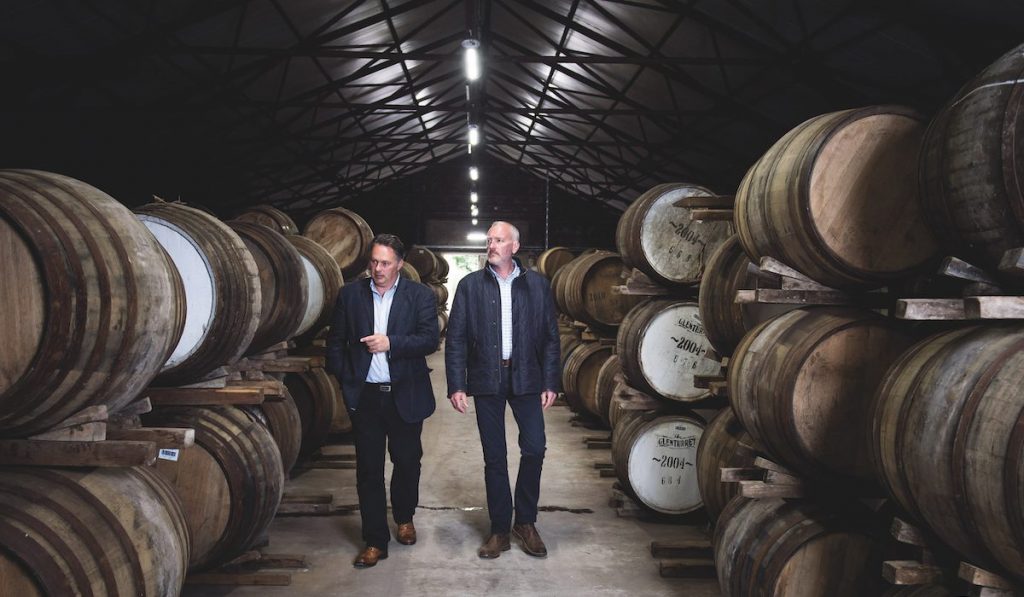 The difference between bottles, casks, independents and funds
Thursday, December 17, 2020 By Victoria Burrows

In September, Scottish distillery Bowmore released 25 bottles of its 1964 Black Bowmore single malt whisky in partnership with classic British carmaker Aston Martin at a price of GBP50,000 a bottle. It might seem like a pretty penny, but it’s a mere fraction of the record-breaking figure of a Macallan 1926 60-year-old that sold in 2019 for GBP1.45million. That’s GBP50,000 a dram, mind you. Black Bowmore was first bottled in 1993, with about 6,000 bottles having been released since then. It has become probably the most sought-after Islay whisky. The new release, Black Bowmore DB5 1964, comes in a bottle made from an adapted Aston Martin cylinder.

“It’s remarkable that a whisky originally priced at around GBP100 at retail in the mid-’90s is now achieving tens of thousands of pounds at our spirits auctions,” says Jonny Fowle, Sotheby’s spirits specialist. “This increase in value can be attributed to its undeniable quality and, now that so many have been consumed, its newfound rarity.”

The world of whisky has been one of superlatives for at least a decade. According to the 2020 Knight Frank Wealth Report, the value of rare whisky has risen by 564% over the last 10 years. In comparison, the value of classic cars rose by 194%, fine art by 141% and wine by 120%. For whisky lovers, or for those wanting to diversify their asset portfolio, there are many ways to reap the hopefully rich (but, of course, never guaranteed) rewards of investing in the ‘water of life’ – or uisce beatha, as Irish monks in the early Middle Ages called it.

Most collectors start with bottles, which are generally – although not in the case of very rare whiskies – affordable, easy to store at home or in professional storage, and can be shipped around the world. Provided a bottle is properly closed and stored, the contents should outlive its owner. The market for selling bottles is well established. There are long-standing, high-quality rare-whisky retailers, auctioneers and brokers, ensuring liquidity. It also makes exiting a relatively easy task. Pricing is transparent when buying bottles.

Andy Simpson of whisky analyst and broker Rare Whisky 101, for example, has a valuation database of more than 630,000 recorded UK auction sales across more than 57,000 different bottles. “It’s easy to see how a bottle has performed over the years and what you should expect to buy or sell for,” he says.

Bottles do have their downsides, however, primarily the “dreaded double D”: drink it or drop it. “If you open a valuable bottle after a night out with friends, it loses its value – although the memories will be priceless. Clearly, dropping it is the worst thing you can do.” More concerning, however, is the risk of buying fakes. “With price increases being so vast over the past few years, forgeries are an expected evil,” says Simpson. “Buyers should research thoroughly and simply walk away from anything suspicious.”

Investing in a series

Most appealing to aficionados, a full whisky series set earns collectors boasting rights and can be excellent investments. Diageo just released a series of eight single vintage malts and named it Prima & Ultima.Priced at GBP20,000, it was personally selected by one of the world’s most respected whisky makers, Dr Jim Beveridge.

“Each of the eight I’ve selected for Prima & Ultima tells a tale of heritage and craftsmanship, and I’ve chosen them from distillers of great personal importance to me,” says Dr Beveridge. The 48-year-old Cragganmore 1971 was the last whisky at the distillery to be made on coal-fired stills before the switch to oil-fired steam heating, while the 35-year-old Caol Ila 1984 was the first release of a new style at the time, rich in texture with a long smoky, spicy finish. The series also includes a 40-year-old from ghost distillery Port Ellen from 1979.

“Some of the most successful bottles from an investment perspective do just what Prima & Ultima are doing,” says Simpson. “You have great quality liquid for drinkers and collectors love it because it’s a set that will have future releases. Therefore, it becomes an investment as demand is high.”

Macallan’s Fine and Rare series is arguably the most sought-after collection of bottles ever, while the more affordably priced limited release Aberlour A’bunadh series is also popular. Several Japanese whisky distilleries have produced legendary lines, including Ichiro’s Malt Card Series by ghost distillery Hanyu. A full set of the 54 bottles, each representing a playing card in a deck including the two Jokers, is almost impossible to find.

Simpson says that collectors may switch off when future releases are either unavailable to them (due to many factors, usually geographical or preferential ‘black-book’ sales) or are overpriced. “Everyone knows that next year’s limited release of Glen-Twiddly-Dee will be more expensive than the last one, but when that increase feels too high, that’s when it can go wrong,” he says.

While well-known brands are typically the place to start collecting, investors should consider looking further afield. Some whisky insiders speak of an inflated ‘whisky bubble’ and contemporary bottles of Macallan, for example, have been retreating in terms of auction prices. When searching out less famous names, make sure to focus on quality. “One of the key triggers for a bottle to do well as an investment is first to remember what it is – a drink. Great quality should always be first and foremost. That way, bottles will be taken out of the market by being opened and the price will increase,” says Simpson.

An often-overlooked opportunity is independent bottlers. These companies buy casks from distilleries and bottle the liquid themselves, revealing as much information about provenance as they choose and is dictated by their contract with the distillery. Some distilleries are, rightly, protective of their brand and intellectual property. Whisky bottled without distillery details are sometimes referred to as ‘secret bottlings’, although some are less than secret.

Andy Simpson (right) and David Robertson are the founders of Rare Whisky 101, which specialises in the brokerage, analysis and valuation of rare whiskies

The Black Bowmore DB5 1964 bottle features a piston from an Aston Martin DB5, hence its name

Douglas Laing & Co’s Directors Tactical Selection 1980 was bottled in 2000 with the label stating it was distilled on the Isle of Skye. At the time, Talisker was the only distillery on the island.Douglas Laing, which was established in 1948, now exports to 70 countries, including Singapore. It is known for releasing the oldest-ever independent bottling of Port Ellen single malt, the Xtra Old Particular Black Series Port Ellen 40-Year-Old 1979, which sells for GBP3,500. Chris Leggat, CEO at Douglas Laing, calls it one of the “family jewels”.

While most independent bottlers just buy casks and bottle them, Douglas Laing is highly involved in the creation of the final product. “Our business model historically was buying mature whisky, but now we focus on the new make or young spirit.”I worked previously for Suntory, where ‘wood, wood, wood’ was drilled into us – you need a remarkable single cask in which to mature the spirit. There are more than 120 distilleries across Scotland, each with its own style, so we marry the spirit to cask and vice versa,” says Leggat.

When it comes to investment value, Simpson says they can be valuable. “If it’s great quality liquid, then some of the most sought-after bottles are from independent bottlers,” he says. “That said, typically if you compare the same distillery, same age, same cask type, same year of production (so as like-for-like as possible), an official bottle will be worth more.”

For whisky aficionados, investing in a cask is perhaps the ultimate romance. It can also yield spectacular returns. A rare 30-year-old sherry hogshead from Macallan Distillery sold for almost HKD4.5 million in a Bonhams auction in Hong Kong at the end of last year, setting a new world auction record for a whisky cask. A growing number of distilleries are today offering cask investment schemes, including small private whisky makers such as Ardnamurchan, Lagg and Ardnahoe, and new brands looking to raise cash upfront.

The giants also have their cask programmes, such as Diageo’s Casks of Distinction, which offers exceptional examples from their 50 warehouses and almost 10 million casks across Scotland. Pernod Ricard’s Midleton distillery in Ireland has its Very Rare Cask Circle. Casks range in cost from GBP1,000 to millions, and vary vastly in size and type of wood, as well as style, quality and age of liquid.

If you open a valuable bottle after a night out with friends, it loses its value – although the memories will be priceless. Clearly, dropping it is the worst thing you can do

“Whisky casks are one of the few assets that appreciate in value over time,” says Simon Aron of whisky investment firm Cask Trade. But buying casks can be a minefield of tax regulations, legal titles and other paperwork.Due to the complexity involved, insiders recommend turning to merchants or brokers within the whisky community for guidance.

“I recommend to my clients what I learned over the years with my own investments: I overpaid, I bought casks that didn’t exist, I bought a cask in madeira that was actually bourbon wood… It can be a nightmare,” says Aron. “Returns are not guaranteed and assessing appreciation is complex. It has to be assessed per cask, per distillery, per year.”

For those looking for a simple investment without passion or a requirement to be involved in managing the asset, there are various whisky funds, some of which are actually private equity or collective investment schemes.

“It’s usually a group of like-minded whisky fans or investors who pool their cash and get the respective economies of scale when buying stock. But, from my perspective, a regulated fund strips the soul of whisky. It just feels too commoditised. It’s for passionate drinkers and collectors that whisky really works as an investment,” says Simpson.