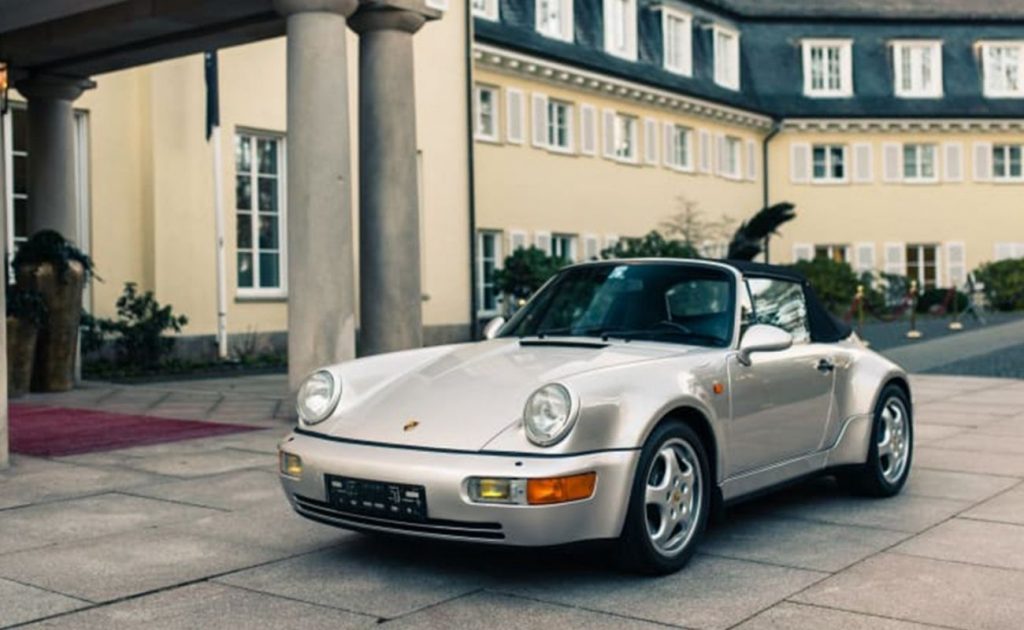 Celebrity cars often offer insight into the character of our favourite musicians, actors and actresses, and reality television stars. Some prefer the class of vintage cars, while others go for extravagance and speed with cars reaching well over 250kph. And if you keep attending auctions, especially in established metropolises like Paris, New York, London and the like, then you’re bound to eventually come across a car for sale that was owned by a bona fide celebrity. And, frequently, a big hype is built up around the star having owned the vehicle to increase its value even further.

Perhaps the latest case in point is a stunning Porsche 911, purchased by ‘El Diego’ in 1992 during his final season playing in Europe at Sevilla in Spain, that’s set to be sold at an auction for the first time. The sports car, a 911 Type 962 Carrera 2 Convertible Works Turbo Look Convertible to be exact, was actually delivered brand-new to the famed World Cup winner in November 1992. Only 1,200 examples of this exclusive model, each packing some 250hp in the back, were produced by Porsche.

Diego Maradona after winning the World Cup in 1986

Now, it is expected to be put under the hammer next month at the Bonhams Les Grand Marques Du Monde à Paris Sale. And if you are an ardent follower of sports celebrity gossip back in the day, then you will also know that this is the set of wheels with which Maradona was stopped by police in the Seville city centre for speeding at 120mph (about 193km/h), and was initially estimated to achieve a selling price in the region of between EUR150,000 to EUR200,000. However, since the Argentine legend’s death on November 25 last year, the top bid is now expected to far exceed the initial figures as demand for one of the world’s all-time great player’s previous items and memorabilia begins to skyrocket.

Off the pitch, Maradona – who infamously scored the ‘hand of God’ goal against England in the 1986 Mexico World Cup – was a keen appreciator of exotic motor cars. Maradona was definitely also a longtime fan of the iconic products from the Stuttgart automaker and the first car the star bought when he began earning serious football money at the age of 19 was actually a Porsche 924. Later, this car was sold several times among different collectors and its price reached USD500,000.

Meanwhile, the Porsche 911 that’s due to be auctioned off next month was originally sold to a private owner by Maradona on the island of Majorca. This first buyer actually kept it for 20 years before it passed through the hands of several French collectors. It is now offered in practically original yet well-preserved condition, having covered just 120,000km since new.

Paul Darvill, the Bonhams European auctions manager, says: “We are delighted to present this quintessential 1990s Porsche with its very colourful and unique provenance, which will appeal to many football enthusiast collectors worldwide.” Darwill also went on to reveal that the auction will take place exclusively online between 3 and 10 March.

And yes, this time around, perhaps it will be a case of the man who makes the car, instead of the other way around.