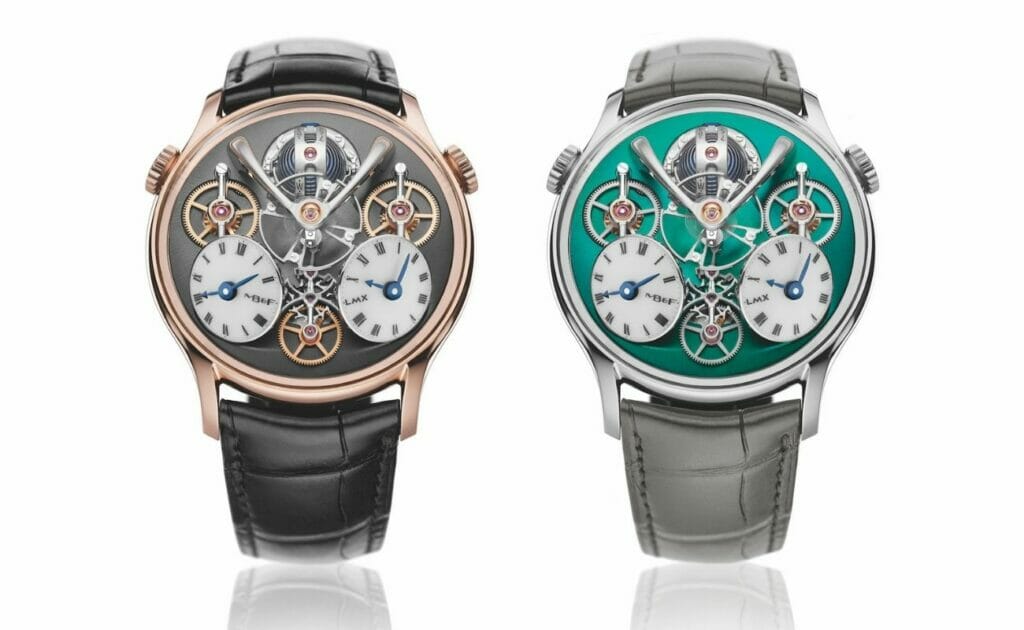 Avant-garde designs that stand out in a world of round watches
Friday, April 2, 2021 By Lynette Koh

Think of independent brand MB&F and what comes to mind are probably its Horological Machine (HM) wristwatches, which are shaped like spaceships, retrofuturistic cars, and even frogs and bulldogs. While it is most synonymous with those far-out designs, the brand – possibly realising that there were many watch enthusiasts out there who appreciated its avant-garde aesthetics but weren’t up for sporting something out of Star Wars on their wrists – launched its Legacy Machine (LM) collection in 2011.

Like most of the watches in the world, LM watches are round. But the similarities end there. Created in collaboration with highly respected watchmakers Jean-Francois Mojon and Kari Voutilainen, the collection’s debut LM1 featured a flying balance wheel that was separated from its usual position within a movement and was, instead, seemingly suspended beneath a domed sapphire crystal. Where HMs are inspired by an imagined future, LMs take their cues from an imagined past, allowing brand founder Max Busser and his collaborators to answer the question: What would MB&F have created if it existed a century ago?

Ten years on, the brand continues to answer the question with the LMX. It is the latest addition to a collection that has, over the past decade, been enriched with unorthodox takes on the perpetual calendar, feminine watchmaking and the tourbillon timepiece.

In many ways, the LMX is like a souped-up version of the LM1. Like the LM1, for instance, it is a dual time zone watch, with two fully independent time displays in stretched white lacquer. However, while these displays lay flat on the LM1, those on the LMX are tilted, a more complex design that follows the style of more recent LM models.

Referencing the vertical power-reserve indicator of the LM1, the LMX has a hemispherical, three-dimensional structure that indicates its seven-day power reserve via two scales: one is marked from one to seven, and another shows the days of the week. (Users can choose which scale they prefer to face outward.)

Of course, there is also the flying balance wheel that takes pride of place in every LM watch. Measuring 13.4mm, this new balance wheel – fitted with inertia blocks instead of screws – is held in place by a curved bridge, and oscillates beneath a domed sapphire crystal that takes the height of the watch case to a towering 21.4mm. Along with this unmissable, dynamic component, parts such as its battle axe-shaped escapement bridge and gear-train components are also on clear display on the dial side.

While the timepiece sounds large with its diameter of 44mm, it actually fits smaller wrists nicely because of its relatively short, curved lugs. What is more challenging, in terms of the wearing experience, is its 21.4mm height – which requires a bit more effort in ding-prevention and also demands more attention than many would be comfortable with. The latter, of course, is precisely the point of a round watch that was never meant for the average wearer.