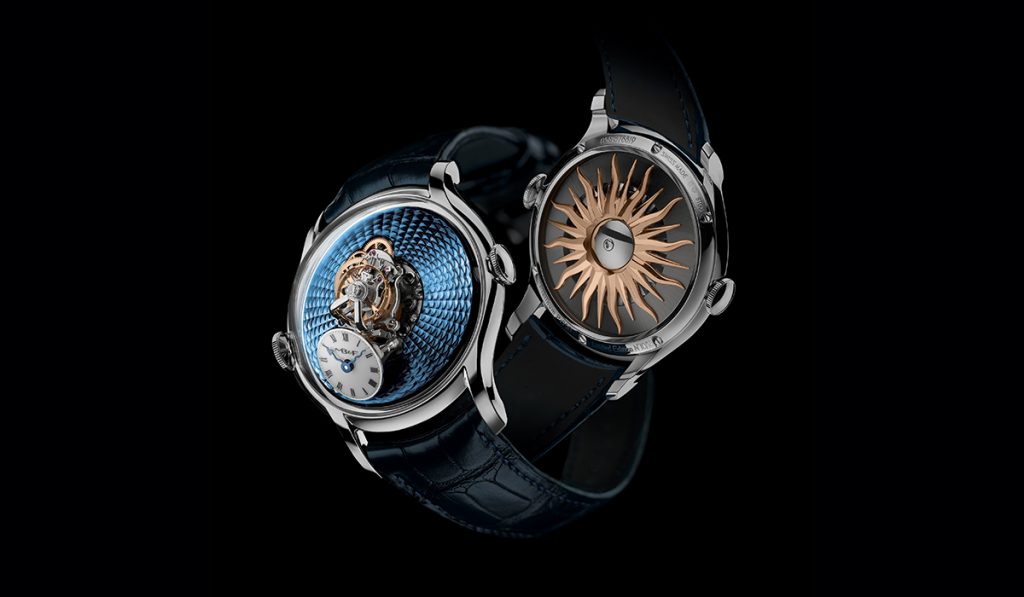 MB&F’s Legacy Machine FlyingT is a moving work of art that you can wear on your wrist.
Tuesday, March 31, 2020 By Jx Chong

Now, it has introduced a new edition of the Legacy Machine (LM) FlyingT. Dynamism and precise engineering characterise the LM FlyingT. Featuring a guillochÃ© dial plate that exists in two versions.

One resembles a dark moonless night and is housed in a red gold case while the other is akin to a midsummer sky-blue with a platinum case.

The intricate pattern of the dial plates features a unique scalloped design that is created by engraving a brass disc with a hand-guided rose engine. Each disc is engraved manually by hand in accordance with traditional watchmaking decoration technique

At the top of the flying tourbillon that gives LM FlyingT its name, a single
0.035-carat stone that rotates in time with the underlying mechanism, making one complete turn every 60 seconds.

At the foot of the flying tourbillon, located at the 7 oâ€™clock position, is a dial of white lacquer that displays the hours and minutes with a pair of blue serpentine hands.

Driven by the energy generated by the sun-shaped rotor, the LM FlyingT’s in-house developed MB&F flying 60-second tourbillon is a visually stunning movement of the rotating escapement and stands in stark contrast to other flying tourbillons, which usually do not venture past the confines of their surrounding watch dials.