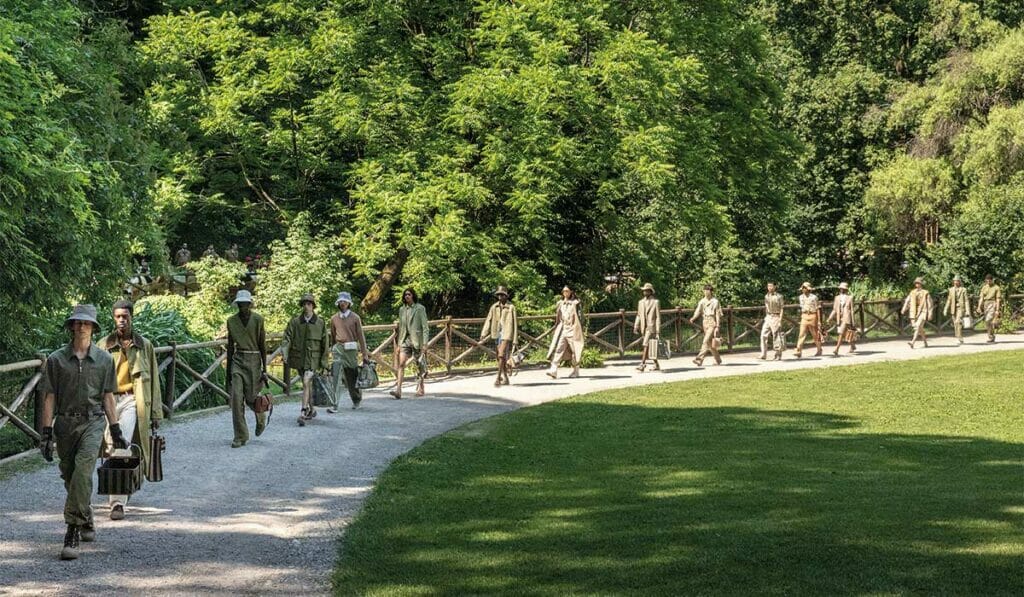 At the Fendi men’s show in June, models walked the runway in the brand’s Spring/Summer 2020 styles, with a number of accessories: totes, bucket hats, sunglasses – and watering cans. Yup, that’s right. Covered in leather or the house’s striped, brown Pequin fabric, large watering cans took centre stage in the show, which was held in the leafy garden of a grand Milanese villa.

It was one of several shows at the recent men’s fashion weeks to tap into a widespread interest in horticulture that is blooming more rapidly than weeds in a well-watered lawn. Apparently seeking respite from the digital world, a growing number of young people are as interested in nurturing their green thumbs as they are in using said digits to upload images of their pots of Monstera or mint to Instagram, accompanied by the hashtag #plantsofinstagram (3.4 million posts and counting).

Verdant styles and sets on show at Fendi.

Verdant styles and sets on show at Louis Vuitton.

Verdant styles and sets on show at Jacquemus.

At Fendi, show notes stated that creative director Silvia Venturini Fendi wanted to bring her clients “out of the virtual space and the overwhelming immateriality in the life of today”. That aside, the show was also a verdant vehicle for showcasing Fendi’s luxurious interpretations of “functionality and utility” – colourblock cargo pants, for instance, or sheer jackets with large removable pockets – as well as a botanical print created by Italian film director Luca Guadagnino.

(Related: Engineer The Spirit of Adventure and Travels Into Your Life With The Montblanc Explorer)

Over at the Louis Vuitton show, the trees lining the Place Dauphine provided the main form of greenery. Artistic director Virgil Abloh made up for any lack of foliage in the Parisian public square with riotous bouquets of wildflowers: They bloomed out of bags, decorated harnesses and covered straw hats. The first African-American design head of Louis Vuitton chose wildflowers – which sprung up, unbridled, in a mix of various species – to represent diversity, a topic close to his own heart as well as that of a growing number of consumers.

The greenest set, however, belonged to Jacquemus. Celebrating the 10th anniversary of his brand, Simon Porte Jacquemus took his show home to the south of France. Models sashayed down a hot pink fabric runway running through a lavender field in Provence, wearing designs that were as fresh as the expanse of purple blooms. The only downside for show attendees was keeping their sartorial cool in the summer sun. A fashion show in a field of flowers is an experience to behold, but we admit: With sweltering temperatures our daily reality, we’re relieved that house plants are just as hot as the great outdoors right now.