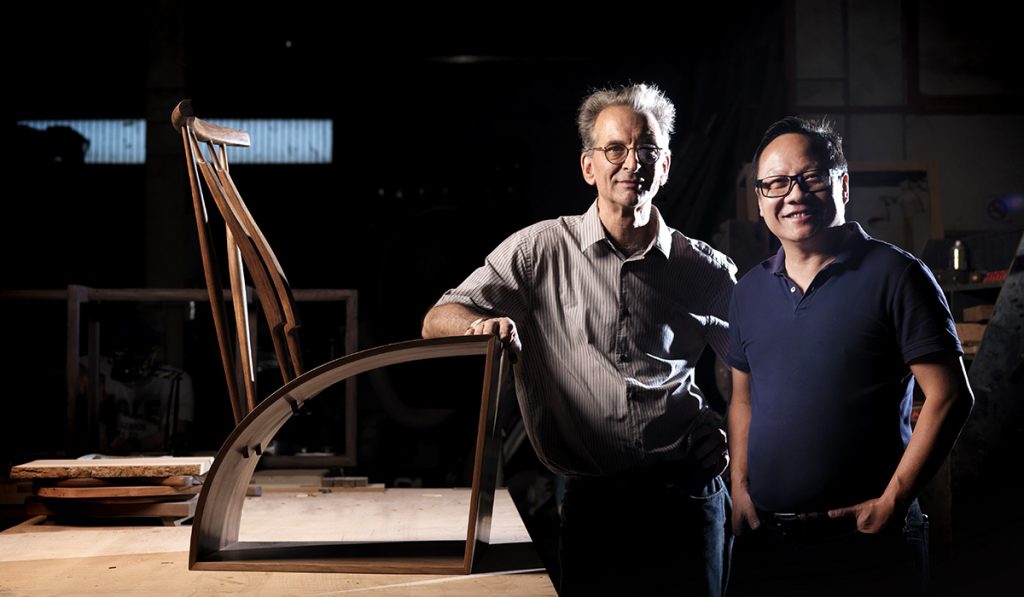 Teaming up with Thomas Hucker, LUMBERmart released their Backley x Thomas Hucker collection. The Peak sits with the renowned woodworker in Kuala Lumpur for a deeper understanding of his craft and charisma.

What is the inspiration behind the limited series that you are currently working on with Charles Lee?

Well, Charles and I were in touch with each other before I came over and we were sending photographs and drawings to each other. It was kind of a mutual selection of certain pieces that have been done before that he liked, although, the side table is a new piece, it was designed for this collection here. There were a few adjustments made on improvement as well as with using the timber selection here at Lumber Mart. We were also looking for pieces that had gotten a response within the United States, the chairs are in a collection in a museum right outside Boston and the sideboards have always been one of my favourite pieces. In furniture, there are basically three groups so there are tables, seatings and what I would call casework, or cabinetry, so I wanted to have one piece representing each of those categories. I didn’t want to come in with three chairs or three tables, I wanted to have that diversity represented.

With such an illustrious career, were there any particular moment that stood out for you?

There have been some wonderful artists that I have been able to meet in my life, those were important. I spent a day with Isamu Noguchi in New York back around 1978 or ‘79, I mean he was a great sculptor. I deeply respected the teacher I studied with in Boston, the first travel to Japan back in the 1980s was very important, being able to live in Italy for a year in 1990 was very important as well. And then I would say there are just certain moments in the studio that are important. A certain piece that you really like that came out better than expected, those kind of moments are critically important.

The only other thing that I think about sometimes is I’ll do maybe 50 per cent work on speculation, and by that I mean there are no clients, it goes to a showroom, that is half the work. The other half of the work are commission work for specific clients, one of the rewards from that is that some of the clients have actually become very good friends. And that is a very nice aspect to what goes on. It’s not something I look for, but your work will attract people that subconsciously agree with you on certain things or have a similar temperament because that is what is going on. That’s been meaningful, I appreciate that.

Any similar moments that struck a chord with you whilst working in Malaysia?

This has been a pretty unique experience because usually in my travels I have either been going more or less as a tourist or I’ve gone as a student. This has been one of the few times that I’ve gone overseas and been able to sit down and produce with the people of the country. It runs deeper than tourism, you really get to know people and cultures on a much stronger level, coming in and working next to them weeks at a time. And Charles has been extraordinarily gracious, I don’t quite know why he did this, but he couldn’t have been more supportive. So I feel very privileged and spoiled, it’s been a really good healthy experience. It’s an interesting relationship because we both have similar passions about furniture and wood, but we are coming at it from two very different places, our backgrounds are very different. But it could be a very mutually beneficial relationship.

You seem to hold a strong passion for the Japanese culture, would you mind elaborating on how it has influenced your body of work?

Western culture, where I am from, the United States and in Europe as well, the arts basically focus on painting and sculpture. And what that really is, is there is a fundamental distance established. You go and look at the thing, you don’t touch it, you don’t use it, it’s almost like a religious reverence. In Asia, I can go to a tea ceremony and I drink from a cup that has that reverence. It’s used, and part of its value is its use. This kind of mixing of common and reverence, that is, to me, very beautiful. And to see a culture that appreciates that and it’s integrated into the culture, it’s not one great rare thing that no one can touch but its a quality of life and the various things that surround you on a daily basis that you use. That is actually quite beautiful. So that is what I talk about when I talk about Japan.

There’s a whole vocabulary of aesthetics that go along with that that doesn’t really exist in the United States, and it runs deep. A certain respect for nature and how it affects the way certain materials are used, there is an entire way of looking at things that aren’t Western, and it’s an impressive philosophy or an impressive approach to thinking about things. Of course, as a Westerner, I don’t want to get involved in trying to mimic or pretend that I’m not Western, so it’s how you learn about these things and kind of fold it into your own work. I mean there are people who try to do Japanese work, and I mean let the Japanese do Japanese work. If you ask me what is Japanese or Asian about my work, there is nothing specific I can point to, it’s just hopefully a layer to things I am doing. If you look at some of the classic Western work, it is very much involved in its decorativeness. It’s being imposed, the more work and human effort put into it gives it significance or improves its value. But the Japanese will go “not necessarily”, because maybe what you don’t do gives it value. As an artist and a designer, we are always struggling to find that balance between how much do I impose on this and how much I don’t, and that in a sense becomes what the Asian influence is, learning to hold back and let the green of the wood talk, let the material speak instead of you.

How would you define your own style when it comes to designing?

It’s a mix. I’ll go back and talk about Isamu Noguchi the sculptor. I don’t know how he’ll answer the same question, being half American half Japanese, having a studio and New York and another in Japan. I met him in New York and I think he had the same trouble answering the question. He fits in a very curious point and time with his work because he was fairly influenced by Asia and Western culture. He is the great master of the synergy. He is the person I’ll look to.

I like the material to talk. I like the pieces to work because functionality matters to me. I make furniture, I’m not a sculptor. There are a lot of people in the design world who are now making expensive things, making it very loud and bizarre. To me, that is not furniture design. If you want to buy this funny thing to put in your house, go ahead. But it’s not great sculpture nor great furniture. They are popular now but that’s just not what I believe in and I’m confused about it. It goes back to Japan, to the teapot. I can drink tea out of this. To remove that from it is like cutting somebody’s lights off. The aesthetic of the bowl is reflected in the relationship between men and nature in the sense that it also helps you also achieve enlightenment. You don’t separate the drinking of tea from aesthetic. The aesthetic is there to back up the act of drinking the tea.

(Related: SH/FT delivers an art exhibition that alights the senses while shifting the narrative of art for the next generation)