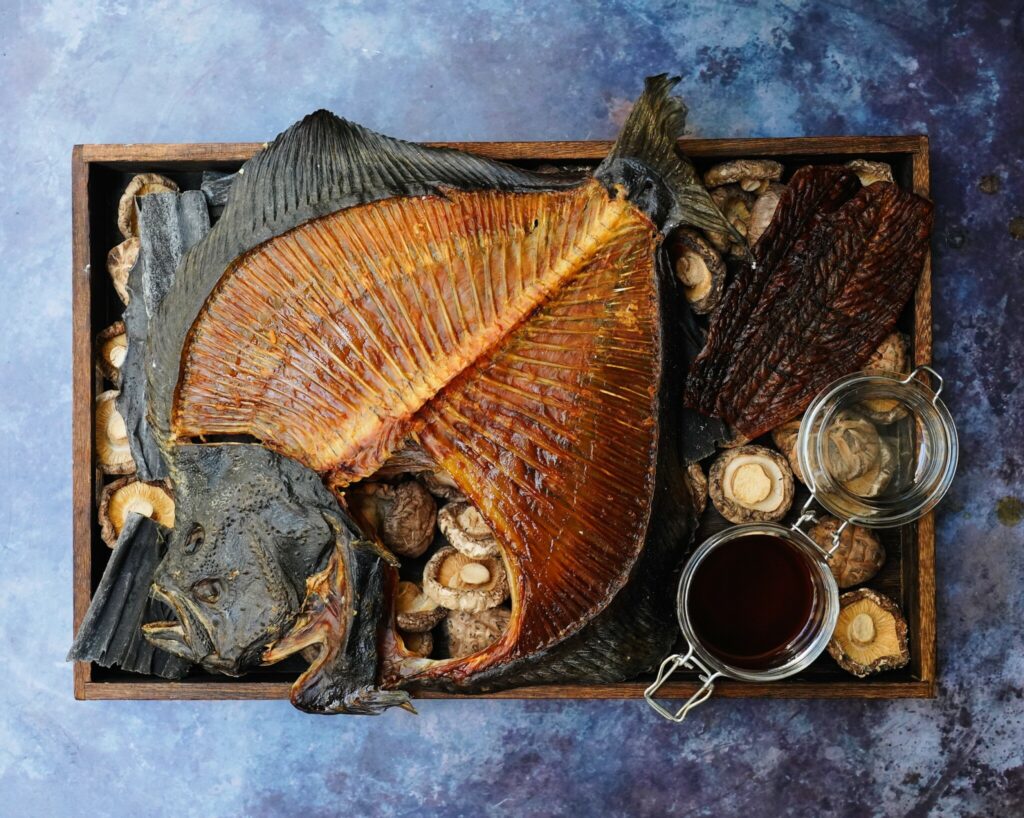 Many modern chefs pay respect to produce but Salted & Hung’s chef-owner Drew Nocente takes it up a notch with his ‘minimal waste cooking’. It’s not about seeking trends; it’s part of his ethos. Having grown up on a farm in Queensland, the Australian-Italian chef learnt at a young age to value every ingredient and ensure that nothing goes to waste.

Drew’s natural approach is to use an ingredient to its maximum potential – drawing out its flavour, while not forgetting about nutrition and enjoyment. His cooking showcases more finesse these days, compared to his earlier menus that placed emphasis on more hearty nose-to-tail dining, alongside techniques like curing, ageing and grilling. The chef is still determined to use every part of the animal and vegetable for his creations, along with trimmings to make broths, sauces and seasonings. To help guests understand some of the minimal waste processes, a pictorial summary of how the ingredients are used is placed on your table.

The well-thought-out tasting menu kicks off with a series of snacks. Munch on crisp potato and polenta chip dusted with a bright red beetroot powder, and perked up with mascarpone and a touch of yuzu kosho. The chef also makes pig’s head super tasty by brining it overnight and slow-cooking it for 12 hours. The meat is then turned into bite-sized rillette, battered and deep-fried, and offset with raw honey and celeriac mustard.

For starters, we’re served the radish noodles, which comes in the form of shredded radish poached in dashi made from radish trimmings and kombu. The slippery ribbons mingle with delicate snow crab seasoned with housemade ponzu. This is then balanced with subtly sweet bafun uni, pickled radish and buttermilk emulsion.

(You may like: Shang Palace Celebrates One Michelin Star Win with a Tasting Menu)

The chef’s rendition of ‘fish and chips’ is presented in a small tin filled with cured diced kingfish, brightened with lemon shallot confit and smoked crème fraiche, and generously topped with gleaming Kaluga hybrid caviar. We scoop this up with the accompanying crispy collagen chips (made of chickpea and tapioca flours fused with collagen broth) and enjoy the textural contrast. This item will be available as an add-on in the new menu.

Charcuterie has been one of Drew’s specialties since day one. The platter is assembled with thinly sliced aged duck breast, cured pork, cured beef aged for about five months to achieve a deep flavour, and lardo made of Iberico back fat cured for six months in salt then elevated with truffle honey and cracked pepper.

The meal marches forward with the signature aged turbot – a standout and an epitome of the chef’s ‘Zero Food Waste’ philosophy. Every part of the fish is woven into the dish including the dashi and sauce. What you’ll get is turbot fillet elegantly rolled up and slow-cooked until perfectly succulent. The fish is finished with a dusting of dark green kale powder.

The waitstaff explains that the skin and turbot trimmings are fermented into a ‘garum‘ that is used to season the vegetables. And the dish is laced with a rich sauce made from the turbot liver and vin jaune (French wine made from late harvest white grapes). There’s also an accompanying warm dashi broth, meticulously made with dried turbot bones, and perfumed with herbs like dill, parsley, fennel, and ulam raja flower.

The final savoury course of dry aged beef sirloin is confit in beef fat and seared over coconut husk charcoal and binchotan until the exterior is well caramelised and interior superbly tender. The meat is accompanied by ‘24-hour BBQ Carrot’.

Much effort is put into the preparation of this humble vegetable. Carrots are confit in beef fat and dehydrated overnight. They are then rehydrated with beef stock and charred over binchotan before serving. The overall dish is bound by a richly flavoured beef sauce as well as smoked carrot ketchup – carrot skin and trimmings are cooked, reduced, blended, and smoked with apple and cherry wood. We were told that some of the abalone shells from previous dishes were used to custom-make cutlery holders and steak knife handles.

Drew’s menu typically includes an apple dessert, a tribute to his family’s apple orchard back in Stanthorpe, Australia. We were served a moist apple cake partnered with cashew praline creme patisserie, black current gel and clotted cream ice cream. Plus a serving of tangy apple kombucha on the side. The new tasting menu (available from 1 December) will feature lacto fermented apple with ginger and apple sorbet.

(You may like: Christmas and NYE Menu at Nobu KL)

The meal ends with Aussie-inspired petit fours. Bite into chocolate choux puff with the familiar taste of milo cream. And Anzac biscuit balanced with a savoury touch of salted caramel and smoked bacon. The childhood treat of fairy bread sprinkled with ‘hundreds and thousands’ is given a less sugary twist. The chef’s modern version here comprises brown butter financier scattered with freeze dried pistachio, yoghurt and raspberry.

Our ten-course dinner stretched from 630pm to 11pm. But from December, the tasting menu will be slightly trimmed, featuring six courses ($168), which we believe will be more manageable yet equally enjoyable.