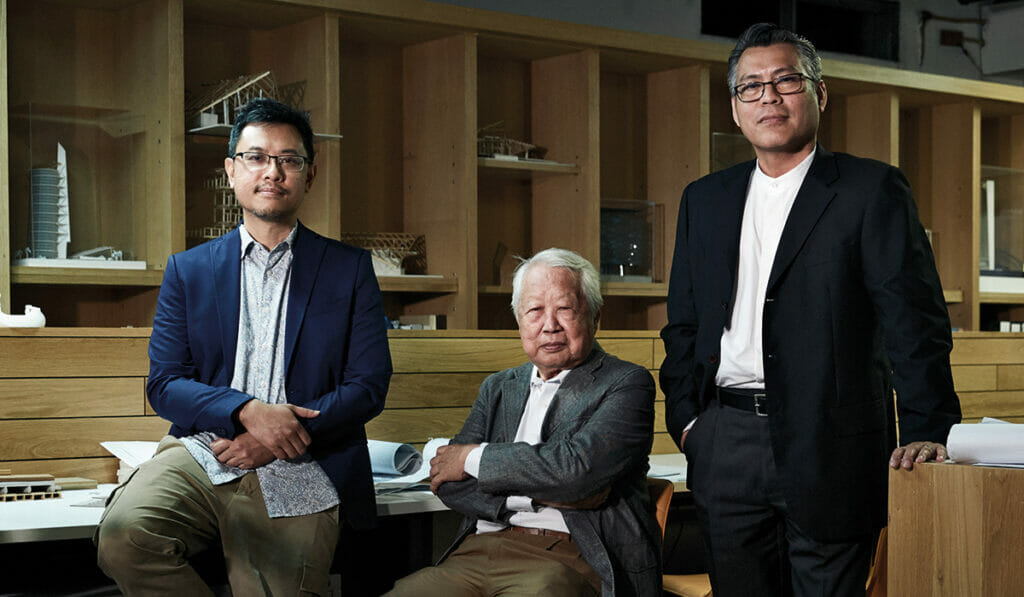 Eminent architect Hijjas Kasturi reflects on the process of creating a better future and his role as a mentor.
Thursday, October 17, 2019 By Editors

It could be said that Hijjas Kasturi is something of a â€œborn teacherâ€, as he calls himself. In secondary school he was a part-time private tutor, and after returning from working in Australia he founded The School of Art and Architecture at the MARA Institute of Technology (then known as MARA College), eventually opening his own practice Hijjas Kasturi Associates (which became Hijjas Architects & Planners in 2015) where he has been since. â€œThatâ€™s part of me,â€ he says. â€œItâ€™s automatic mentoring. You just go on doing it.â€

Working as an architect in Kuala Lumpur since 1977, his stamp on the cityâ€™s skyline is unmissable, giving us iconic landmarks like Wisma Equity, Tabung Haji, and Telekom Tower, to name a few. Years later in 1994 he would open Rimbun Dahan in Kuang, an art sanctuary of his own design (and the home of him and his wife, Angela) less than 30km from the city centre. Itâ€™s through these two establishments that Hijjas would come to mentor the likes of Amir Hamzah and Multhalib Musa, respectively â€“ both young men at the time, fresh out of university, and trying to find direction.

The firm and the retreat have come to be known as a â€˜third universityâ€™. â€œThey come here and they get a refresher and tutorials,â€ says Hijjas. The teaching and knowledge comes from Hijjas himself. â€œI think mentoring is also an extension of teaching in a way, and Iâ€™m still teaching today,â€ he muses. â€œWhen you give lectures itâ€™s not from the book, itâ€™s from your experience, which gives a new dimension that nobodyâ€™s heard of, because thatâ€™s fresh first-hand knowledge. You pass that message to the new generation.â€

Much of what has shaped Hijjas came from the formative period after completing his studies at University of Adelaide, undergoing an apprenticeship with self-tutored architect (a trait he had greatly admires) Gordon Brown, the man he considers to be his own mentor. Sometime after Hijjas moved to Malaysia in 1967, Brown had also come to KL and in a full-circle moment, the two did some work together here. â€œI found it excitingâ€”he came to help me, that was fantastic,â€ he remembers. Despite the time and distance, Hijjas clings to an important lesson from Brown, â€œI still remember there was one thing he saidâ€”â€˜in life what youâ€™ve got to learn and give is three things: honesty, unselfishness, and loveâ€™.

â€œLove that when youâ€™re doing something you must do it with love, otherwise itâ€™s lost and the spiritâ€™s not there,â€ he says. â€œUnselfishnessâ€¢youâ€™ve got to give unselfishly. A lot of our buildings have been copied by somebody else, I donâ€™t worry about it. Maybe they see something good about it. And you must do things honestly â€“ now some people think that honesty is to speak honest things, but honesty is also being honest in your work. When you do a building, it is solid and firm, and itâ€™s something you believe in, you donâ€™t just do it because you want the money. You really believe in it, itâ€™s good for the people and itâ€™s good for the nation. And you feel that yourself, youâ€™re contributing something because you do it honestly.â€

Dispensing some inspiring words to a mentee at the right time is a technique that seems to be equally as effective as an orchestrated lesson. As Hijjas puts it, â€œMentoring doesnâ€™t have to be every day, sometimes itâ€™s something you do where you just say a few things. And thatâ€™s what you remember.â€

This is what Hijjas has come to practise every day. Amir remembers his early days in the firm, when Hijjas would join him at his desk around 5pm in the afternoons (an hour before he would leave for the day) and the two would talk about architecture, calling it a personal kind of mentoring. The University of Texas graduate had the fundamental knowledge of architecture but no focus, and credits Hijjas with helping him build up his confidence, â€œI was very proud of it. This was Encik Hijjas himself sitting next to me, talking to me about how to look at a building, how a design comes about, thereâ€™s always a â€˜whyâ€™, thereâ€™s always a story behind it,â€ he says. â€œYou have the talent, or the gift from God but your environment actually makes you improve â€“ thatâ€™s what I got from Encik Hijjas.â€

Since then Amir has risen through the ranks and now holds the title of Senior Associate, doing what he calls a balance of corporate and creative work (at the time of this interview, his most recently completed project was the MÃ¶venpick Hotel in Sepang). For someone who started out doing paintings and commissioned art when he was younger, his growth is in no small part thanks to the stimulating and challenging atmosphere of Hijjasâ€™s practice (he says the advice he would give to his younger self would be â€œtake opportunities, believe in yourself, do not be afraid to dream, because this environment allows you to do thatâ€), and his committed guidance over the years.

To him, the importance of effective mentorship cannot be overstated. â€œFrom my own experience, you have the basic knowledge of something, but then you need to be focused, and somebody needs to direct you and explain to you the good and the bad of certain things. It is important for the next generation to have this environment.â€ He hopes that he can perform the same sort of mentorship to anyone he crosses paths with, whether itâ€™s his industry peers, or the interns â€“ â€œThey come to our office for four to six months. After that, they would come back and ask my opinion on what they are doing at the moment â€“ they would show their work, and you would give your thoughts and some suggestions on how to improve the design part. I hope the other architects who work with me and my team learn something from the way I work and think.â€

While Hijjasâ€™s influence as an architect canâ€™t be ignored, his contribution to the world of art and those who work within it have also benefited from his magic touch. For 25 years, Rimbun Dahan has served as a private arts centre for developing traditional and contemporary art forms, with a year-long artist residency programme that has seen many regional and international creatives involved in over the years (â€œHundreds of them,â€ Hijjas says).

Multhalib was one such beneficiary, joining in 2001 as a painter. He soon found his strength as a sculptor through Hijjasâ€™s guidance. â€œI donâ€™t think he had seen my sculptures,â€ Multhalib recalls, â€œIt was during the course through discussion with Hijjas, that he saw how maybe my paintings should be set aside and I should focus on doing sculptural works. My student works was something new in Malaysia at the time, there werenâ€™t many artists who were doing contemporary sculptures.â€

â€œItâ€™s a natural thing to see what the potential is in each individual and you develop it from there. You get the best out of people in that way,â€ Hijjas explains. Multhalibâ€™s work is easily recognisable â€“ his hallmark is the use of repeating organic shapes that seem to ripple and echo through physical space â€“ and since his time at Rimbun Dahan has gone on to be an internationally recognised award-winning sculptor, granted international residencies in Japan, Australia, and most recently at the 2019 ChÃ¢teau de La Napoule, on the French Riviera. Hijjas enthusiastically calls him one of the greatest sculptors in Malaysia. â€œThatâ€™s something that us as mentors are feeling very proud of,â€ he beams.

Such was the effect of Hijjas on Multhalib, he was inspired 10 years later to buy a two-acre plot of land five minutes from Rimbun Dahan to create his own place to have public sculptures, a public park, and for other artists to rent the space and have a dialogue with him â€“ carrying on the mentorship legacy of Hijjas in his own way. â€œThatâ€™s how he inspires me, more than as a mentor,â€ he says, â€œIn terms of my work, itâ€™s more on how he does his own design, and thatâ€™s how I draw from him. His principles, that sort of thing.â€

Hijjas has a great admiration for these artists, and sees this mentorship period as an exchange of ideas of sorts â€“ a two-way street of learning. â€œIâ€™m fascinated by [Multhalibâ€™s] work, because a sculpture is also a building, itâ€™s just in a larger form,â€ he says excitedly. â€œArtists are free souls, bright spirits. Thatâ€™s a wonderful thing to get from them, like when they use colour: architects will be afraid of using some colour because the client might object, but the artists donâ€™t care. And when you see the combination of colour, that can create an awesome feeling â€“ thereâ€™s something in that which stimulates me, and I think itâ€™s good to put it into a building as a freshness.

â€œYou learn a lot in that way. Learning is in everyone, learning never stops. Thereâ€™s always something new.â€ Itâ€™s something heâ€™s been able to feed into his own work as an architect, tackling design challenges from a different angle, observing things from a new point of view, and spurring on his own imagination, saying â€œCreativity is a wonderful thing. Thereâ€™s no such thing as â€˜thatâ€™s the end of the roadâ€™, thatâ€™s dogma. Architecture and design have no dogma, thereâ€™s no principles sometimes. Sometimes itâ€™s intuitive, sometimes itâ€™s a new horizon that youâ€™ve got to follow, and thatâ€™s fascinating.â€

His grander philosophy on his purpose as an architect and a creative has altruistic roots, that everything he is doing is for the betterment of the country and contributing to the nation â€“ a philosophy he wants to pass to the next generation. â€œWhen we look at our job, we donâ€™t want to do it only because we want to get our fees just to survive,â€ he says, â€œor to make the tallest building around. We want to do something creative so that it can enhance our society. You want to build things so that people say, â€˜Wow, isnâ€™t that niceâ€™, something to make you proud. And luckily some of our buildings do that. People feel joy. Thatâ€™s what itâ€™s all about, architecture, bringing people delight. So is art, so is anything like that. This is our job.â€