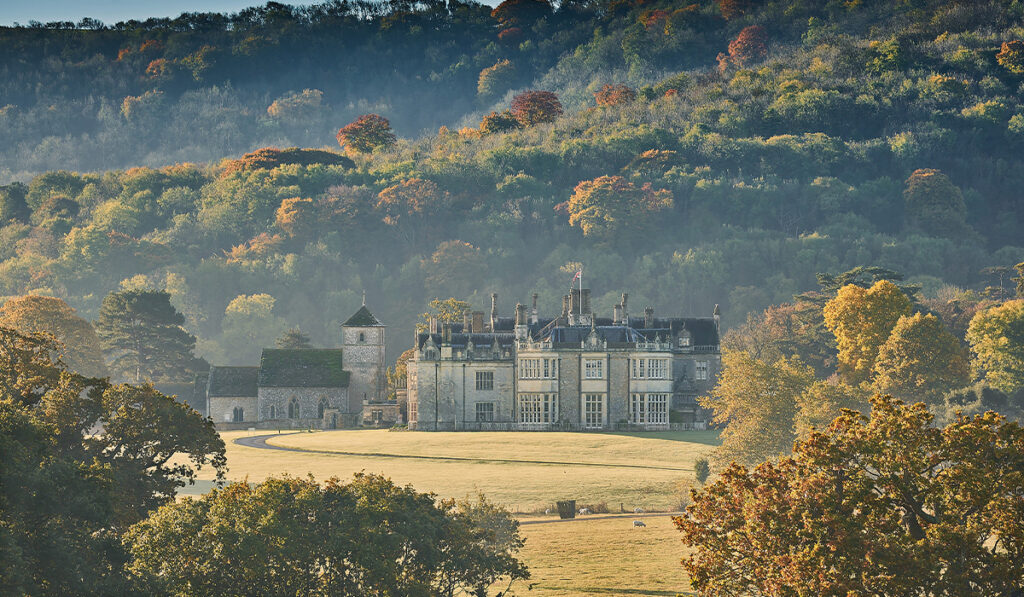 In 2017, London’s 67 Pall Mall, a private members’ club in London for wine lovers and fine dining, held its inaugural Judgement of London – a blind tasting that pitched English sparkling wines against Champagne. The event came soon after British chef, restaurateur, and TV personality Marco Pierre White said that “only a numpty would buy English wine”.

Was White wrong? To ensure an even playing field, all the wines were chosen from similar retail price points to avoid comparisons between them and those from older vines in Champagne. And, while Champagne took first place in two of the three bubbly categories – Brut, Blanc de Blanc and Rose – the British sparkling wines held their own, taking second and third in each category and dominating the top three spots for Blanc de Blanc against their Gallic rivals across the English Channel.

Harry and Pip Goring, the owners of Wiston Estate.

While the abundance of chalky soil in the south of England allows the English to make quality sparkling wine, another important reason for its sudden proliferation in the past decade is climate change. England was previously deemed too cold to produce wines of outstanding quality. However, the average temperature in the region – where most of the country’s vineyards are located – has risen by 1 °C over the past 50 years. This means a climate much closer to that of Champagne’s, which faces the looming problem of becoming too warm.

“We have a long, cool growing season that allows the grapes to achieve optimum ripeness and acquire precise and distinctive flavours. Coupled with the high acidity English sparkling wines naturally have, we get wines that are fresh and have a fantastic ability to age,” shares Dermot Sugrue, winemaker for Wiston Estate Winery in West Sussex.

The English weather, however, can often be a double-edged sword. Cool temperatures can cause unpredictable conditions like rain and frost, resulting in highly variable yields and an overall average lower than Champagne’s.

Land scarcity is another challenge. While agricultural land in England is cheaper than Champagne’s average of 1.5 million Euros per hectare, the UK has just 3,000ha of land under vine – a small fraction of the 30,000ha in the Champagne region alone. Even if estates were ready to invest in the three years it takes for grapevines to bear fruit, Sugrue shares that much of England’s south is owned by traditional farming families who might not be willing to sell their land. “We’re just too young an industry,” he says.

Up and Coming
But being young is exactly what makes it so exciting. It’s a chance to see the potential of the English terroir first-hand, as well as for winemakers to further innovate.

While the Protected Designation of Origin (PDO) status currently exists for “English quality sparkling wine”, the appellation laws are less structured than those found in traditional wine-producing countries like France. Sugrue feels this is for the best.

“We need to promote experimentation in the UK, and the fewer rules and regulations we have, the better. A lot of producers source from different counties. They need to be given the freedom to do this so that they can fulfil their production requirements. Of course, all the wines should go through analyses and tastings to ensure their quality. But that’s fantastic enough for the time being.”

Sugrue shares that winemakers are just seeing a small measure of typicity emerging. “It’s only within the last 30 years that we’ve had this enormous increase in vineyards being planted and wineries being established. There are a lot of young brands out there that don’t have the chance to develop a style. I’ve been making wine at Wiston for 15 years now, and we’re only just seeing the distinction between the wines grown in the different regions of the UK.”

With relatively high production costs and significant effort to get the wines into the bottle, it makes little sense for English winemakers to be producing plonk. Countless tastings have shown that English sparkling comes with a quality that justifies its price tag.

Sugrue himself is one such example. One of the most prolific winemakers in the country, Sugrue has been active in the UK wine industry since 2002. A former winemaker at Nyetimber, he worked with Henry and Pip Goring to set up Wiston. Today, he also makes wines for other estates, including Jenkyn Place Vineyard, Ashling Park and his eponymous highly decorated label Sugrue South Downs.

Unlike the mega-estates of Champagne, Sugrue doesn’t strive to reproduce a particular house style for his clients each year. Instead, he wants to “make the best wine possible” with the fruit available each year. For Wiston and Sugrue South Downs, this means a predilection for oak-ageing in used Burgundian barrels, avoidance of malolactic fermentation and unusually long ageing periods – at least five years in the bottle before release – so the wine can “give immediate pleasure”.

Lifts All Ships
While the existence of great local winemakers is good news for the bubbly loving English, who rank second in the world behind France in terms of Champagne consumption, an industry cannot prosper on quality alone.

Fortunately, there’s already plenty of infrastructure. London has one of the most sophisticated wine distribution networks in the world. Now it’s just about “individual producers aligning with the right distributors and export markets” so people can get excited about their wines. Wiston Estate exports about 15 per cent of its sales to some unexpected places, including Canada, Bermuda and Scandinavian countries.

Institutions have also lent their support. Wine GB, the national body of grape growers and winemakers, offers a range of services to promote English and Welsh wines on a global stage. The government has also invested in the industry – most recently with £6 million (S$11.56 million) of funding for viticultural systems such as digital weather stations.

For the first time in English winemaking history, too, many wineries are offering experiences – tours, cellar doors, restaurants, and even stays – across the country’s 700 vineyards that were rarely offered before.

Says Sugrue, “We’re in a fantastic position because the UK has historically imported so much Champagne. Now we’re seeing many drinkers switching to English sparkling wine. They’re clearly enjoying the quality and the slight difference in style while paying more or less the same amount. And they’re happy that it’s a local product.”

This article first appeared on The Peak Singapore