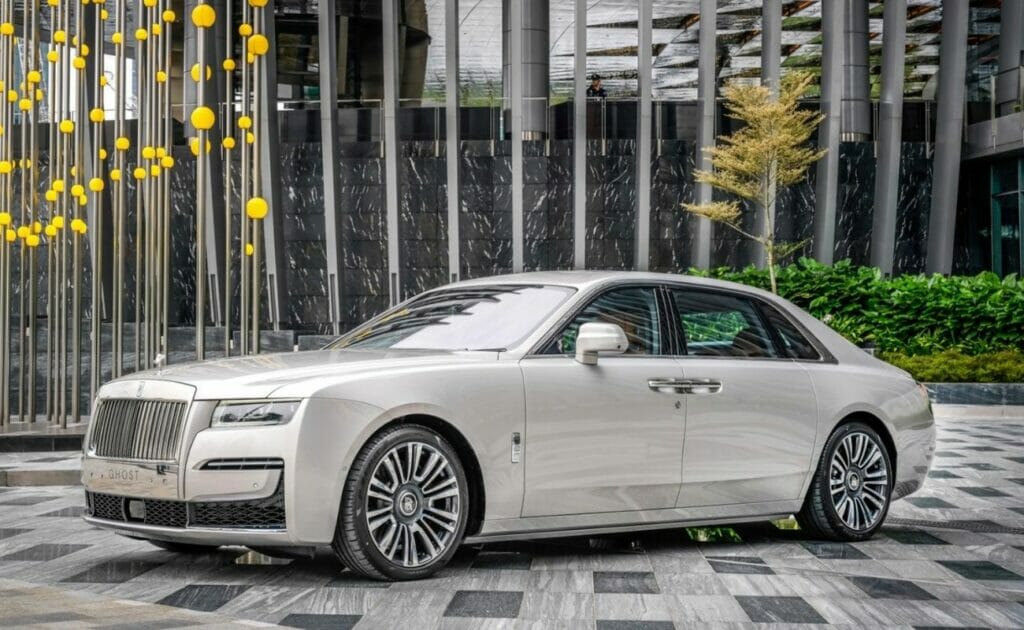 Touted as the hallowed British car-maker’s most advanced model yet, the second-generation Rolls-Royce Ghost has just landed in Malaysia. The all-new luxury sedan is offered in two versions, starting with the standard wheelbase model, priced from MYR1.45 million, and an extended-wheelbase model that starts from RM1.65 million.

On the dimensions front, the standard-wheelbase model measures 5,545mm in length. The extended-wheelbase version is a good 170mm longer at 5,715 mm and all the additional ‘mm’ going into creating additional space for rear passengers.

Both wheelbase versions of the Ghost are powered by a 6.75-litre twin-turbo V12 petrol engine that serves up 571 PS (563hp) and 850Nm of torque. It is paired with a ZF eight-speed automatic transmission and all-wheel drive, allowing for a zero to 100kph time of as low as 4.8 seconds.

With an evolutionary approach to its blueprint, the new Ghost’s ‘Post Opulent’ design philosophy succeeds in making the car both minimalist while remaining distinctively a Rolls-Royce, thus retaining the marque’s proud 116-year history. But before one calls it ‘old fashioned’, do consider the following…

This new car definitely offers plenty to talk about among techies. For starters, the new Ghost rides on a lightweight aluminium chassis and is equipped with high-level autonomous driving tech, all-wheel drive, all-wheel steering and much, much more. Apart from the expected umbrellas in the doors, there’s also the striking illuminated Phantom grille, rectangular headlamps with laser technology, near-square taillights and C-shaped LED DRLs.

To be expected, of course, the new Ghost definitely underpins RR’s much-touted Architecture of Luxury spirit as well. Thanks to the sedan’s self-levelling air-suspension system, the chassis offers the brand’s famed magic carpet ride. Further aiding the cause is another clever function that uses a stereo camera system to look up the road ahead, thus preparing the air suspension to soak up all the bumps it sees. No need for any champagne to spill on the ritzy upholstery now, is there?

After all, inside the new Ghost, just like in any Rolls-Royce, is the definition of serenity. The car’s ‘Formula for Serenity’ provides for more than 100kg of acoustic insulation that is applied to the roof, door, inside the tyres, between the double-glazed windows, and within all of the car’s body. Even some components are tuned to share a common resonant frequency. So, yes, perhaps you really can hear a pin drop while inside one of these.

For the convenience of occupants in the back or up front, there’s also the joy of using a version of BMW’s iDrive system that comes complete with twin instrument and infotainment screens features. This also offers all the latest technologies, including a WiFi hotspot, a 360° camera system, a 7×3 head-up display and parking assist. The car also gets the usual driver assistance systems, such as collision warning, adaptive cruise control, lane departure warning, and blind spot monitoring with rear cross traffic alert, plus a feature called vision assist with day- and night-time wildlife and pedestrian warning.

And as you would expect, only the finest leathers, woods and metals are applied to the cabin, all customisable to suit the preference of affluent customers. There’s even a champagne fridge provided between the rear seats, which has two settings – 6°C for non-vintage champagnes, and 11°C for vintage ones.

Of course, given our current pandemic-threatened reality, perhaps another of the car’s in-cabin specifications could very well be the car’s star feature. The Ghost now features the new Micro-Environment Purification System (MEPS). And yes, it’s in place to detect if any offending and harmful airborne contaminant reaches an excessive amount. If so, then the system automatically switches on recirculation mode, directing all air through a nanofleece filter that removes nearly all ultra-fine particles in mere seconds.

In spite of the wealth of standard equipment that any new Rolls-Royce would boast, on average, globally, its clients still plough through yet another six-figure sum into personalisation, and for that matter, the carmaker’s bespoke division is there to make the Ghost your very own. Certainly, a sobering amount of cash, but if you’re in the market for the best, you’re definitely going to get it with the second-generation Rolls-Royce Ghost.