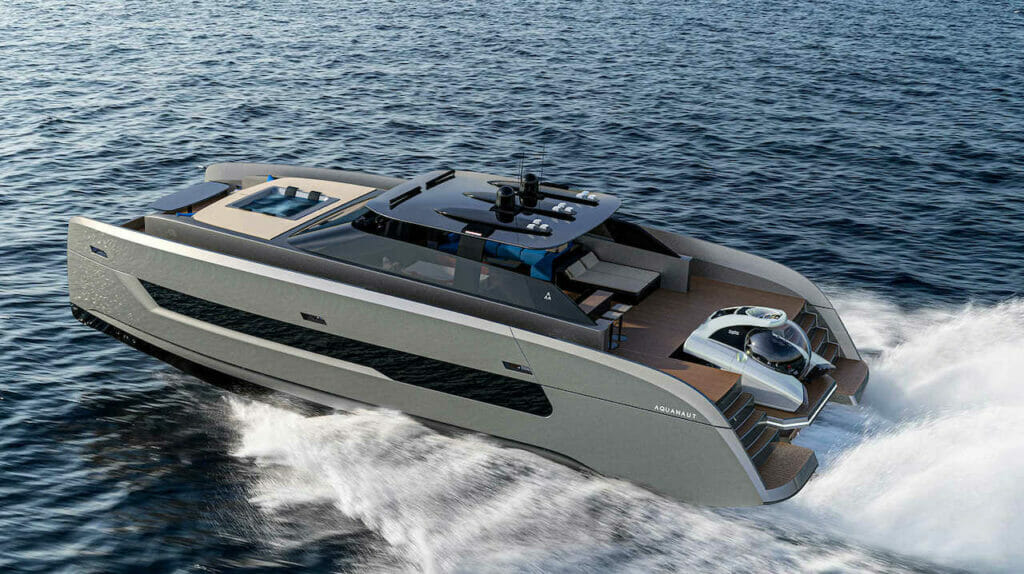 Italian yacht design studio Officina Armare has partnered up with Dutch submersible manufacturer U-Boat Worx to create a luxury catamaran that’s far more than plush pillows and extreme speed. Luxury living is on the move – and experiences are everything – which is why it has gone with an explorative submersible tacked on to your luxury yacht.

That doesn’t mean the catamaran isn’t the star of the show. The Italian company has gone with a sporty – and blocky – aesthetic. It’s a far cry from your usual sleek, angular sports yacht that aims for speed above all else – and proudly so.

Equipped with a pair of 800hp Volvo Penta IPS 1050 engines, the Aquanaut is able to hit a top speed of 45 knots, or maintain a comfortably fast cruising speed of 30. Its hydrodynamic design keeps the deck stable when out at sea – perfect, considering that the yacht comes with sunbeds, a jacuzzi, al fresco dining areas and plenty of deck space in between everything else.

It also packs in a sizable storage area which can hold your usual yacht party kit, along with an upmarket and adventurous twist – the U-Boat Worx Nemo Submarine.

With rough estimates going at around 80% of the world’s oceans left unexplored, the mini-submarine that comes with the Aquanaut Catamaran might just be the vessel that lends a touch of cachet you’d be hard-pressed to find at most pool parties.

That said, you won’t be exploring the deepest ocean trenches with just the luxury Nemo Submarine courtesy of U-Boat Worx. It’s actually compact enough to be towed, for example, on the back of a car. Or on the back of your catamaran.

With just enough space for two passengers, the sub allows you to dive for up to eight hours and can reach a depth of around 100 metres. Far enough down that most of the sun’s light won’t be able to illuminate the fish and coral around you, but not so far that you’re going to find any massive sea monsters or gaping underwater chasms.

The boat also comes with the necessary hydraulics to get your sub in, and out, of the water. Once the sub is in the water, though, the space doubles up as an alternate party deck or outdoor space. The total package is going for a cool SGD4.2 million and will be built to order by Turkish boatyard Licia Yachts.

Will Officina Armare’s explorative solution to luxury make waves for years to come? We can’t say for sure just yet, but one thing’s for sure – there’ll be plenty of room when the time comes.