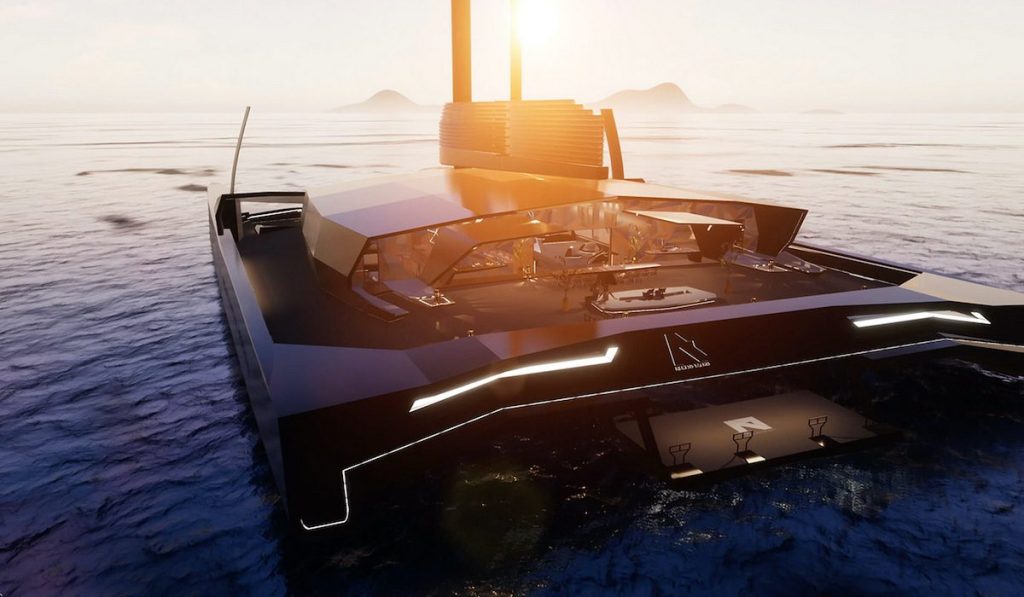 Combining the high-level performance of racing yachts, luxurious interiors of cruises, and automated technology of the future
Saturday, December 19, 2020 By Tan Su Yan

Looking like a villainous vessel straight out of a Bond movie, the Nemesis One hydrofoil catamaran certainly lives up to its name. From its renderings, one can tell that it is not like most yachts one would see berthed along your local yacht lagoons.

For one, its sail is completely automated, negating the need for a large crew. Powered by AYRO Oceanwings wing sail, the movement of the wing will be automatically adjusted according to the winds. The elimination of the human hand also allows the reef and furlable wing sail to be much more efficient, 2.6 times more, in fact.

Even without reliance upon the wind, the vessel remains zero-emission. Retractable hydrogen-electric propulsion drives the boat forward. Hydrogen fuel, plus 750 sq m of solar panels, means that fossil fuels are not needed, truly preparing this hydrofoil for the energy efficient future we need to head towards.

These technologies combined allow the vessel to break the 50 knots speed barrier, cutting through the waves with its computer-controlled hydrofoils. With this high-level performance, according to a Nemesis Yachts press release, “the high-tech superyacht resembles more of a stealth fighter jet, than a conventional sailing yacht.”

In addition to all of this, comfort is not a sacrifice one has to make for speed. The interior of the hydrofoil can match a cruise in its luxurious design. And smart LiDar (laser radar) sensors will ensure that all gathered data of the surroundings will be processed by the mainframe into control commands for the hydrofoil and rudders, allowing for a steady ride at any speed.

The level of performance resembles that of stripped-out racing yachts, and yet luxury is at one’s fingertips. If there were any yacht to be framed at the height of luxury, this future marvel may just be in the running.