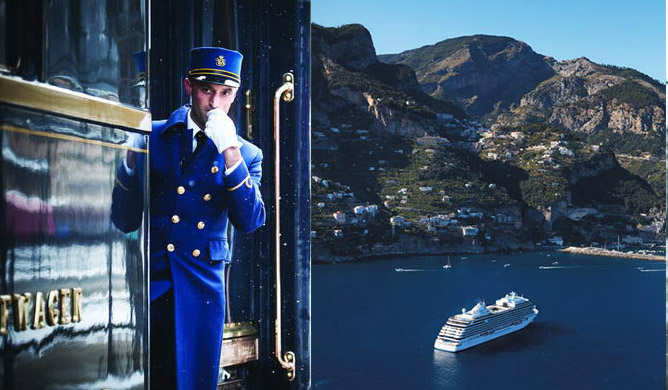 It always seems that whenever someone talks about going on a holiday, more often than not they are travelling by airplane. The trouble is that sitting in an airplane isn’t very interesting at all.

So why not consider alternate modes of transports by choosing to travel by land or sea the next time you go on holiday.

After all, sometimes the journey is worth more than the final destination. Here are some suggestions to keep your next epic getaway interesting.

ENJOY A LANDSCAPE VIEW BY TRAIN

The Belmond name is unparalleled in the realm of luxury travel, offering a multitude of exclusive experiences, from hotels to cruises and even fine dining. But Belmond’s list of train experiences are sure to impress even the most discerning of tastes, with several destinations to choose from to allow you the full experience of luxury rail travel.

The most impressive of all Belmond’s trains has to be the Venice Simplon-Orient-Express, taking guests from London to Venice, and vice versa, through the breathtaking passages of Europe, such as the idyllic French rural farmland and the valleys of the Swiss Alps. Travellers can also take the Orient Express from Paris to Berlin, or Paris to Istanbul, opening up more of Europe to those looking to get a feel of the continent from the ground.

Stepping onto the Orient Express is akin to taking a time machine right back to the 1920s, with Art Deco details adorning the entire train to transport you there, complete with a steward dressed in blue and gold to welcome you aboard. The Venice Simplon-Orient Express first rolled onto the train tracks in 1982 after heavy restoration since Belmond founder James Sherwood first bought two vintage train carriages five years prior. This luxury rail has been captivating train enthusiasts and travel buffs since then.

A stay in the Grand Suite will be sure to keep you happy, as the ornately decorated cabin comes with free-flow champagne. Meals on board are a sure hit for passengers as well, as you choose from three dining carriages: Cote d’Azur, L’Oriental and Etoile du Nord, while the bar car, named 3674, which was the carriage’s original number, lets you bask in the old-world charm of slow travel in today’s otherwise fast-paced life.

Travel like heads of state when you embark on a journey in Portugal’s most exquisite train. Re-named The Presidential Train at the turn of the century, this locomotive is a true part of Portugal’s history since its first run in 1890, as it served as the royal train for the court of King D Luis I and transported visiting dignitaries such as Queen Elizabeth II and Pope Paul VI. The train was retired in 1970 and was displayed in the national museum before being restored in 2010 and returned to the tracks for people to enjoy.

The Presidential Train is not so much a vacation as it is a gastronomic experience, with impeccable cuisine sitting at the heart of your journey. The ninehour itinerary takes passengers on a return trip to and from Porto. Departing Porto from the São Bento train station, guests enjoy a gourmet lunch prepared by an evolving roster of specially appointed Michelin-starred chefs and a wine harmonisation session featuring Portugal’s best wines from the Niepoort vineyard, all on the tracks as the magnificent train makes its way to Vesúvio. Once there, guests disembark for a rare opportunity to visit the otherwise-closed-to-the public Quinta do Vesúvio estate and winery. Here, they will taste the products of the surrounding Douro Valley in the wines and ports of the Vesúvio wine estate as part of their walking tour, before trying their hand at foot treading in one of the last remaining wineries that still practice this traditional process.

Though The Presidential Train journey isn’t a long one, the trip is unlike any other in Portugal and allows visitors to get to know the heart of Portuguese cuisine, as they wine and dine on the best that local produce has to offer.

Rail travel in Japan is as ubiquitous as nothing else in this East Asian country, from the highly efficient subway system in Tokyo, to the speedy Shinkansen, or bullet train, that takes commuters across the country in record speeds. For a nation where rail travel is so embedded in the locals’ lives, it’s little wonder that the Cruise Train Seven Stars has found its place on this list. Japan’s first luxury sleeper train, the Cruise Train Seven Stars offers an exclusive travel itinerary that takes passengers across Kyushu on a 3,000km track that passes through all seven prefectures.

Guests have the option of a four- or two-day trip, in either spring/summer or autumn/winter seasons, and, throughout the trip, will be introduced to some of Kyushu’s history and culture. While most nights are spent on the train (with no complaints, we’re sure), most meals are enjoyed in some of Kyushu’s historic and iconic restaurants on the ground, as guests disembark the train at various stations in order to fully taste the flavours of the land. The itinerary also includes an overnight stay at a ryokan in Yufuin, so this rail travel experience is more than just seeing the countryside roll by from the panoramic windows that adorn the carriages.

Getting on the list to join one of Seven Stars trips is no easy feat, however, as this cruise train only accommodates 28 passengers at a time. Applications open for two weeks only twice a year, in April for the next autumn/winter season and in October for the spring/summer season, so getting on this exclusive train journey will truly be the trip of a lifetime.

Dubbed the most luxurious ship ever built in anticipation of its maiden voyage back in the summer of 2016, the Seven Seas Explorer is the flagship vessel of luxury cruise line, Regent Seven Seas Cruises. Known for having some of the best service and amenities in the cruise market, Regent Seven Seas Cruises is not a new name to those familiar with high-end on-water travel experiences. Travelling with any of Regent’s four ships (soon-to-be five with an upcoming vessel slated for release in the coming year) is the perfect choice for the traveller looking to have his mind at ease throughout the trip, as the all-inclusive fare allows guests to experience everything the cruise has to offer, including unlimited shore excursions and a free-flow open bar throughout the duration of the trip.

Step on the Seven Seas Explorer and be awed by the stunning décor, with granite and marble interiors and more than 2,500 pieces of art adorning spaces in the ship, including works by Pablo Picasso. Guests can also dine in one of the many restaurants and cafes on board, from the main restaurant Compass Rose to the specialty dining spots of the French-style Chartreuse, the Prime 7 steakhouse and Pacific Rim’s pan-asian fusion.

On the Explorer, guests will stay in some of the most spacious rooms you can find on water, with the all-suite accommodation options ranging from the modest 28 sq m Veranda Suite up to the 413 sq m Regent Suite, letting you choose just how much space you need when traversing the ocean. Plus, every suite comes with its own private balcony, so you get the best views of the rolling ocean waves and salty sea air.

THE SEADREAM I AND II

For those who prefer to travel in a more exclusive luxury setting, these smaller yachts from the SeaDream Yacht Club fleet would be more suitable. With only 56 staterooms on board and a maximum passenger count of 112, a yacht cruise on the twin vessels SeaDream I and II is as intimate as you can get on an ocean cruise. The small passenger and crew size makes the experience that much more special, with personalised service making the trip feel more like a vacation on a friend’s yacht as opposed to travelling in a group.

The two SeaDreams also offers something for the adventure-seekers, with their retractable marina platform and fully stocked water sports equipment. Go jet skiing or board a personal sailboat for some fastpaced, heart-pumping activity, or choose from glassbottomed kayaks, stand-up paddleboards, snorkelling gear, banana boats and many more for a fun day in the water. For those who’d rather take it easy, morning yoga on the deck, followed by a relaxing dip in the saltwater pool or freshwater Jacuzzi and finishing off with a round of golf might sound like a better idea.

In the evening, the Piano Bar offers a social space to interact with fellow passengers and relax to live tunes, drink in hand, for those with an inclination to stay indoors. Or, enjoy the cool night air and join SeaDream’s movie nights under the stars, where passengers are invited to get comfy on the lounge chairs with blankets, popcorn and bar service to catch a movie on the outdoor screen. Perhaps the biggest draw on the deck of both SeaDream I and II are the Balinese dream beds that can be transformed to plush beds in the night for guests to drift off to sleep, lulled by the sounds of the sea and kept company by the stars.

The Seabourn name is well-known to cruise enthusiasts and its ultra-luxury Ovation ship (and sister ship Encore) has all you need. Seabourn is known to be the best in small-ship cruising, allowing their ships to navigate narrower channels to bring you to remote locations beyond of the reach of 1,000 passenger ships. Itineraries on the Ovation include ports across several continents and range anywhere from seven days to two months.

The thing that makes the Ovation special is that it names-drops several greats that were involved in the making of the ultra-luxury ship. Adam Tihany, legendary interior designer, was in charge of the ship’s décor from bow to stern, while three Michelin-starred Chef Thomas Keller designed the menu on the ship’s main specialty restaurant, The Grill by Thomas Keller.

On-board entertainment is provided by award-winning lyricist Tim Rice (known for penning classic tunes from Aladdin and The Lion King), so you can be rest assured that you won’t be in want of entertainment throughout your trip.

And one can’t expect less than a suite with private balcony on a luxury cruise, and guests won’t be disappointed with the accommodation choices. The Grand Wintergarden Suite allows space for large groups, with two bedrooms, two baths and, of course, two verandas so you have ample space to sip your drinks and enjoy the view of the horizon.