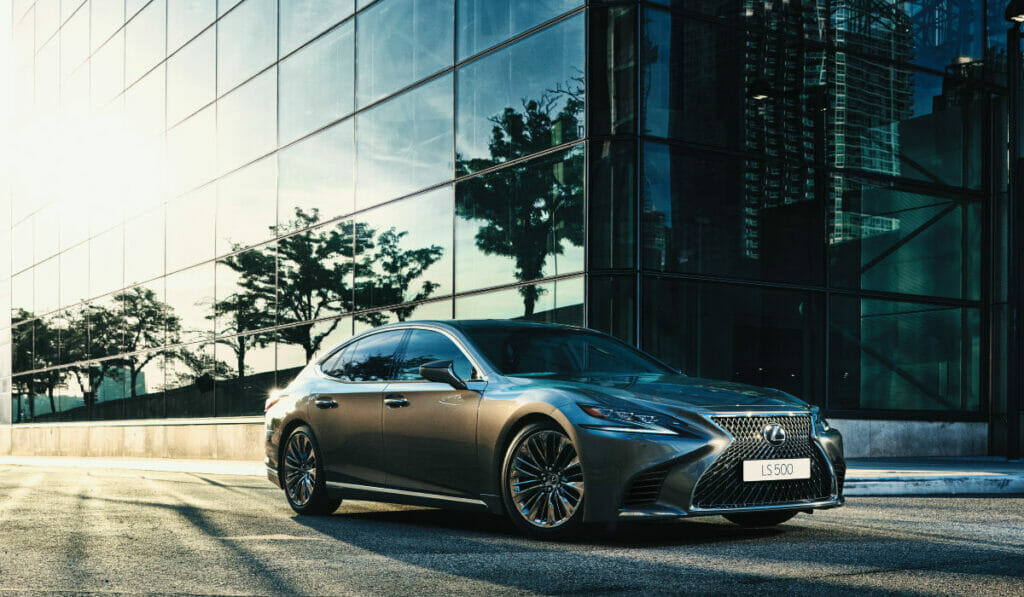 The best place to be in the Lexus LS is the back. No, that’s not damning the company’s all-new flagship sedan with faint praise as it is vastly improved in the front, too, especially from the driver’s seat. But there’s certainly no denying that sitting in the back is really something exceptional, particularly so if you are going somewhere special.

The LS sedan’s nose, with its massive ‘spindle grille’ and Z-shaped headlights that almost cut into the wheel arches, has already proved controversial among the motoring press worldwide. The grille has been compared to a squashed Coke can and the snout of a plankton-scooping aquatic mammal. Personally, one finds all this to be a bit harsh as this could just be Lexus’ attempt at exploring new design parameters that excite younger, hipper moneyed folk looking for their first limo.

After all, millionaires in their mid-20s are a dime a dozen these days, yes? Other unmissable features on the outside are the flared fenders, full LED combination rear lamps with a distinctive sequential illumination turn signal, and a six-window profile that enables excellent outward visibility for occupants.

Incidentally, the LS is the automaker’s flagship rear wheel-drive limousine and now in its fifth generation. This goes on sale in Malaysia in three variant forms, the LS 500 Luxury, the LS 500 Executive and the range-topping LS 500h Executive Hybrid. The new LS sits on the company’s Global Architecture – Luxury (GA-L) platform as seen on the LC, and measures in at 5,235mm long with a 3,125mm wheelbase, 1,900mm wide and 1,450mm tall, with the bonnet and boot placed lower than before.

Step inside via one of the cavernous back doors and you’ll find that the rear seats recline, business class-style, with ottomans lifting to support the lower legs. This and various other settings can be controlled via a touchscreen between the rear seats. The same touchscreen allows you to push the empty passenger-side front seat right up hard against the dashboard, liberating about one full meter of legroom! The front seat’s headrest tucks up, too, so as not to impede the view. And yes, with 22 different ways to adjust the rear seats, finding that zen moment while commuting between engagements is just a few buttons away.

There also a twin-screen entertainment package with a new 23-speaker Mark Levinson Reference audio system that includes speakers in the roof lining. The dual 11.6-inch LCD screens come standard with Blu-Ray, HDMI and SD card playback connectivity. Yes, this system is such a delight that one could happily sit in the car on the driveway just to experience it!

My driver for the day seemed a long way away but the very civilised behaviour of the 3.5l twin-turbo petrol V6 engine, and the smoothness of the 10-speed transmission, made conversation so darn easy. All LS variants also come equipped with a multi-link front/rear electronically-controlled air suspension system, and ride on 20in wheels wrapped with 245/40 front and 245/45 rear profile run-flat tyres.

In terms of powertrain choices for the new car, the LS 500 Luxury and Executive petrol variants have 3.5l twin-turbo petrol V6. The new mill offers 415hp at 6,000rpm and 600Nm of torque from 1,600 to 4,800rpm. Performance figures are a 250 km/h top speed, with the two petrol variants posting 0-100 km/h sprint in five seconds. Meanwhile, fuel consumption is a claimed 10km per litre combined.

Standard equipment across the entire range includes semi-aniline leather upholstery, a smart entry and start system, a powered assisted boot with a kick-open handsfree function, electronic parking brake with auto brake hold and four-zone automatic air conditioning with Lexus Climate Concierge. The latter uses infrared sensors to measure the occupants’ body temperature and applies the most comfortable climate control setting for each one.

The inclusion of a rear-seat luxury package also adds those raised ottomans in the back, which effectively limits the number of rear seat passengers to just two. Other standard fit items include a 12.3in electro multi-vision navigation display, a 24in (600 by 150mm) colour driver’s heads-up display, a three-spoke leather/wood finish multi-function steering wheel and 28-way power adjustable driver/front passenger seats complete with cooling/heating features and a Shiatsu massage function.

Apparently, my driver used to race cars and, as we began to drive towards the city centre, he asked if I’d even driven a car competitively on the Sepang International Circuit before. ‘No’ I replied and he went on to say that I shouldn’t worry because this isn’t ‘that sort of car’. But what sort of car is this Lexus then? To find out in the shortest possible time, I asked if we could go for a drive to Genting Highlands, or at least to Gohtong Jaya at the foot of the highlands so that we may experience the car in a more dynamic fashion.

The ups and downs of the high-altitude roadway leading up to Genting Highlands were certainly spectacular even at sensible speeds, and the Lexus’ adaptive suspension system coped admirably with some spots that probably needed resurfacing on the roadway and other irregularities. On the road, it feels sportier and a whole class smaller, thanks largely to a sophisticated and tauter body structure, active stabiliser bar and adaptive air suspension.

Big, rear-wheel-drive, luxury-branded sedans seem archaic as the 21st century heads toward its third decade. But Lexus can’t and will not let the LS fade away into history. With its new, big four-door offering, the direct successor to the original 1990 LS400 that rocket-launched the brand into existence remains perhaps as the only Japan-made vehicle well-kitted enough to worry the producers of more common luxe limos from Stuttgart and Munich.