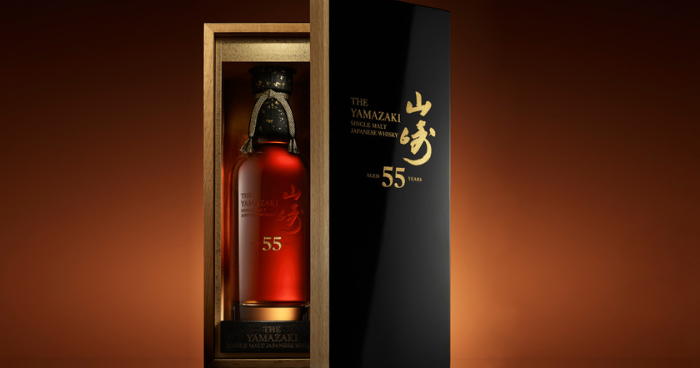 And at the prices it’s going for, the Yamazaki 55 is quickly becoming one of the most sought after bottles this year.
Wednesday, December 22, 2021 By Charmian Leong

Its astronomical price isn’t all that surprising, since the Yamazaki 55 is now the oldest Japanese whisky in the world. It’s also one of the hardest to obtain. This incredible bottle was first released to its domestic market last year, and it was still only available for purchase through a lottery system.

(You may like: Are Auctions The Fast Track To Amassing A Wine Collection?)

This year, Suntory has announced a further release of 100 bottles for global retail, with four allocated to Singapore. A teaser was offered by way of an extravagant four-hands dinner hosted by Chef Julien Royer of three-star Michelin restaurant Odette and Chef Ishi of one-starred Shinji by Kanesaka. The dinner, which was held on 2 December, came with a tasting flight of Yamazaki Distiller’s Reserve, 12 Year Old, 18 Year Old, 25 Year Old and, of course, the 55 Year Old.

At the time of writing Beam Suntory is still finalising the trade partners for those precious four bottles, but if you’d rather get a jump on it, online Japanese spirits retailer Dekanta is letting one go for $1.3 million.

This is apparently the price one must pay for a liquid time capsule, since the 55 Year Old was ultimately a generational effort. It comprises a spirit distilled by founder Shinjiro Torii himself in 1960 and aged (mostly) in mizunara oak casks, as well two more single malts from 1961 and 1964 respectively that were distilled by blending successor Keizo Saji and then placed in white oak. After 55 long years, the whiskies were married by current Chief Blender Shinji Fukuyo and master blender (and Shinjiro’s grandson) Shingo Torii.

“The Yamazaki 55 is the House of Suntory’s oldest release in its history and is said to pay tribute to the founding family of Japanese whisky, while celebrating the Japanese Showa era of the 1960s. In fact, ageing of this expression began the same year as the Japanese Olympics in 1964,” says Andrew Pang, Regional Brand Ambassador for Beam Suntory.

According to Pang, the whisky’s bouquet hints at sandalwood and leather before opening into a sweet and mature aroma of ripened fruit. The acidity is soft and lingering, “like breathing fresh, cold forest air at first light.” Flavours include oak, coconut, heather and honey and an undertone of smoke. “That was a pleasant surprise, since smoky notes are more commonly linked to Hakushu, not Yamazaki,” he adds.

The crystal bottle has “Yamazaki” engraved on it, with the age statement rendered in maki-e, the Japanese art of sprinkling gold powder on wet lacquer. The bottle’s opening is wrapped in handmade Echizen washi paper and bound with a traditional Kyoto braided cord. The box is made of mizunara oak and coated with Suruga lacquer.

There is also the possibility of acquiring a bottle through travel retail, as the House of Suntory recently announced additional quantities will be heading to airports around the world, with a recommended retail price of US$60,000 ($81,815).