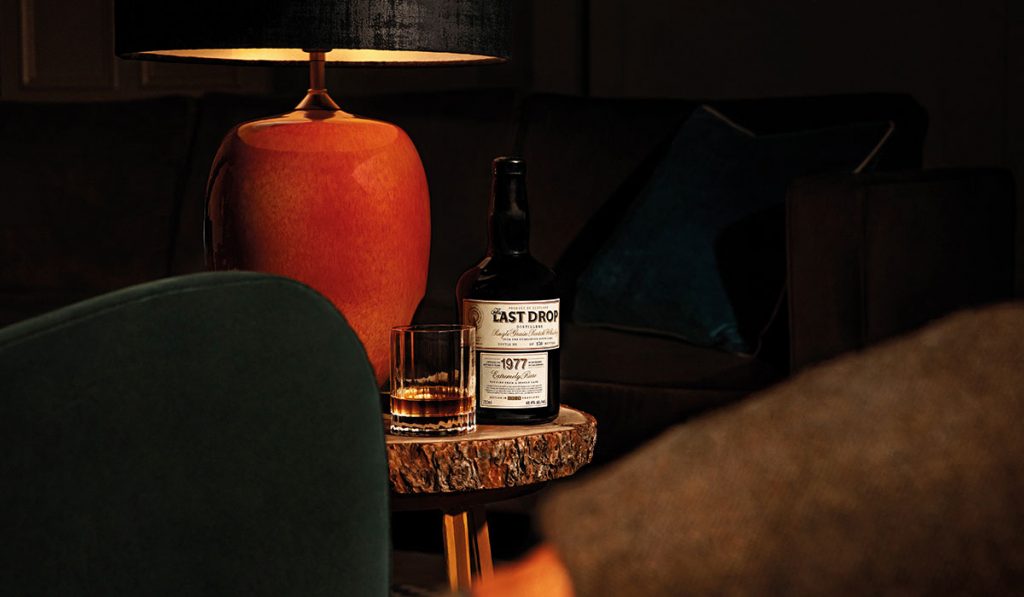 Single grain whiskies are often overshadowed by their more heavily marketed single malt cousins by price and the fact that they can made from less expensive grains. But a lone cask from the now demolished Dumbarton distillery didnâ€™t escape the notice of The Last Drop Distillers. Rescued for the independent bottlerâ€™s 17th release, The Dumbarton 1977 Single Grain Scotch Whisky has already been awarded Single Grain of the Year in Jim Murrayâ€™s Whisky Bible 2020 with a score of 97 points.

Even if Dumbarton were still operating today, thereâ€™s a good chance weâ€™d never get the opportunity to taste it if independent bottlers like The Last Drop Distillers didnâ€™t step in to release it.

â€œLarge companies like Beam Suntory and Diageo have very clear strategies, so a single barrel is often more of a complication than a specific priority. And lesser known distilleries will be directing all their efforts into their 12- and 18-year-old spirits, so to do something special with an unusual cask is too onerous for the small returns,â€ explains joint managing director Rebecca Jago. So while we are beginning to see bigger brands put up more special editions and rare casks, there are still many that slip through the cracks.

Finding them takes considerable time and discernment, which is why The Last Drop Distillers has brought to market fewer than 8,000 bottles in 12 years. Jago estimates that the company rejects about 90 to 95 per cent of what they taste, and all of their releases, which currently include whiskies, cognac and port, have been aged for at least 40 years. â€œWeâ€™re always on the lookout but itâ€™s more about who you know, what you want, and bothering to pick up the phone when someone gets in touch with you. Always, always listen because you never know whatâ€™s going to be around the corner.â€

One such call led Jago and her team to a family-owned distillery in Cognac, which produces spirits that end up as top-tier cognacs like the Remy Martin Louis XIII.

â€œThe owner had been renovating one of the estateâ€™s barns and discovered a cask of cognac from 1925 that his grandfather had hidden behind a wall before World War II. It sounds like a made-up Indiana Jones story, but what we tasted was spectacularly good.â€ That cask became The Last Drop Distillersâ€™ 14th release â€“ the 1925 Grande Champagne Cognac.

However, as consumers are wisening up to the allure of rare one-offs, Jago is aware of growing competition. â€œThere was a cask from Islay that went for nearly Â£1 million (S$1.8 million) at a recent whisky auction â€“ and it sold without anyone bothering to taste it. So weâ€™ll have to take more risks in the future, in terms of buying younger barrels and seeing how they turn out.â€

As an independent bottler, The Last Drop Distillers isnâ€™t restricted by house style or even product category, and Jago hopes to add rum, baijiu and Japanese whisky to its portfolio in the future. The only criteria is that they must be magnificent examples of an aged liquid. They donâ€™t necessarily have to be hidden away in a forgotten pre-war cellar either. â€œWhatâ€™s more important is whatâ€™s inside the barrel, not where the barrel is. Weâ€™re just looking for these little miracles that make you think youâ€™re tasting something really quite special.â€

Scotch Malt Whisky SocietyÂ This members-only whisky club has arguably the largest collection of Scottish single malts drawn from single casks, many of which are award-winning. Each edition is obviously limited, but new bottlings are available every month and members also have access to the Societyâ€™s private rooms and bars around the world.Â www.smws.com

That Boutique-y Gin CompanyÂ The sister company to multi- award winning Boutique-y Whisky Company was the first independent gin bottler in the world when it launched three years ago. Expect fun and experimental gins from top producers, such as the smoky Smouldering Heights gin made in partnership with Masons Gin that features peated malt.Â www.thatboutiqueygincompany.com

Cadenheadâ€™sÂ With a history dating back to 1842, Cadenheadâ€™s is one of the oldest and most respected bottlers in the world and its founder, William Cadenhead, had been bottling single malts (instead of blends) long before the category became popular. The company also bottles gin, rum and cognac.Â www.cadenhead.scot