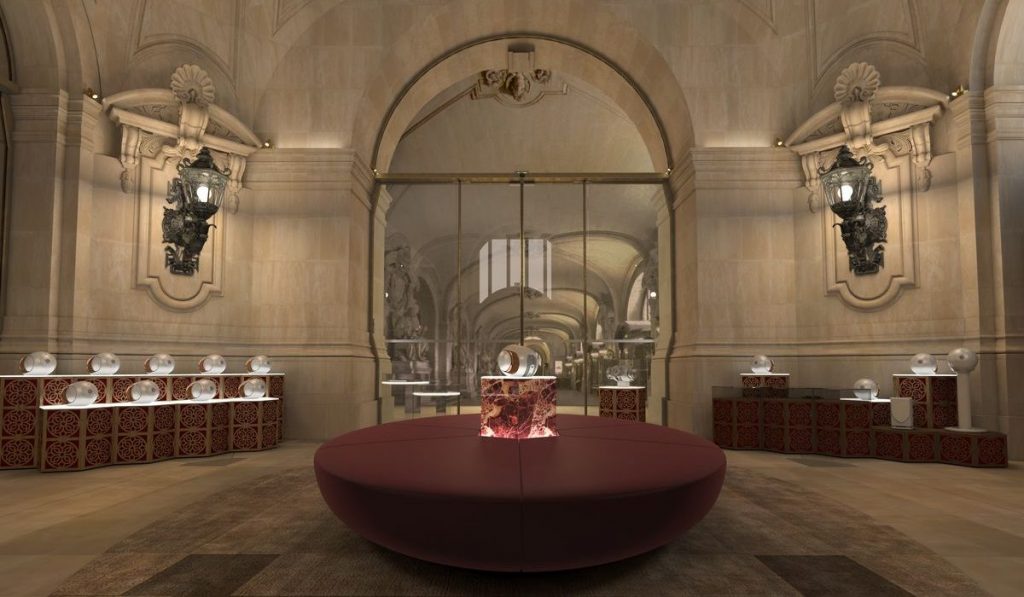 We head to Paris to find out why sound systems from French luxe brand Devialet are so lauded.
Wednesday, January 24, 2018 By Editors

Deep in the frigid bowels of the Palais Garnier in Paris, the haunting grounds of the Phantom of the Opera, we hunt the Phantom himself. No opulent, gilded halls or garish light of day now; only bare stone walls that leach warmth from oneâ€™s skin and colour from the air. We come across the entrance to the famed underground lake, upon which the masked menace abducted Christine Daae. The murky waters are undisturbed. Heâ€™s not here either.

Then we hear it: a haunting, otherworldly croon just on the edge of our hearing. It raises our hackles even as it beckons to us. As we double-time through the musty air, the dismembered female voice becomes more insistent. She begins channeling vibratos. We clamber up a final narrow passageway and look upon the perpetrator. There it is, in the middle of the subterranean hallway â€“ the Phantom.

Not the estranged Erik of Gaston Lerouxâ€™s creation, but a similarly christened, watermelon-size speaker that is filling the halls with notes so crisp and crystal clear, you can shatter them with a tuning fork. Through the undulating, sorrowful voice, emotion and warmth pour back into the room.

The overtures of an orchestra then pick up where our singer trails off. The intense timbre and textured richness of the rendition are so convincing, weâ€™re transported. Our entourage stands in reverie for a good half-minute before remembering our smartphones.

French brand Devialet has crafted a modern day angel of music, dressed in white and wreathed in gold. And, boy, is it making the soprano sing.

Gilded halls hold a dark secret: here the Phantom of the Opera was conceptualised and implanted.

THE NEXT WAVE OF SOUND

Come 2018, a battery of 18 Devialet Phantoms â€“ the premium Gold variation, to be precise â€“ will â€œperformâ€ in a spacious side chamber at the Palais Garnier, each representing an instrument section of full-scale orchestras. On show nights, hapless latecomers will be able to file into this room and enjoy the performance as it happens in the grand opera hall while waiting for intermission.

In similar vein, owners of the Phantom around the world will have access to Phantom Live events â€“ they can tune in if an opera is ongoing and be assured of a high-fidelity experience. In the day, theÂ space will be Devialetâ€™s most impressive showroom â€“ and thatâ€™s saying something, considering the brandâ€™s stores are blooming in luxury malls around the world.

That this is the first commercial partnership the Palais Garnier has deigned to enter in its proud history â€“ and the fact that itâ€™s entrusting the reproduction of sound to a young brand â€“ speaks volumes of Devialetâ€™s growing influence. The â€œtemple of musicâ€ was built from 1861 to 1875 at Emperor Napoleon IIIâ€™s behest, under a promising young architect, Charles Garnier. So glorious was the construct at the time that the grand boulevard leading to it, Avenue de lâ€™Opera,Â is deliberately devoid of trees to this day.

Reason? The branches and leaves would have obscured the full view of the faÃ§ade, as royalty and nobles descended upon the most expensive building in Paris at the time, the place to be seen.

Almost every cranny of the Palais Garnier halls is daubed in gold by a single house â€“ Ateliers Gohard â€“ which Devialet would later work with to produce a special Gold Edition, honouring the history and artisans behind the monument.

But the Palais Garnier is not the first notable entity to fall in love with the Devialet proposition. LVMH CEO Bernard Arnault was won over in a live demonstration of Devialetâ€™s early sound systems, and shortly after became lead investor. Jay-Z soon joined the growing list of bankrollers behind the growing firm. Chanelâ€™s Karl Lagerfeld owns over a dozen.

Weeks before the visit, the office of French president Emmanuel Macron tweeted a picture of him hard at work. Earning a spot among the sheaves of paperwork deciding the nationâ€™s future was a distinctively shaped Phantom. We dined at celebrated chef Yannick Allenoâ€™s Ledoyen off the Champs-Elysees later that night, and up on the wall of the dining room, a Phantom was mounted. â€œHow do you like the speaker, chef?â€ I ask after the mandatory photo with him. â€œFantastique,â€ he Frenches with a flourish, a man of few words.

To further expound on the quality of sound would be superfluous â€“Â The PeakÂ reviewed the Gold PhantomÂ in July, and decided it was worth a page on its own. The list of audio awards the series have scooped up in its short two-year run is surely putting more established brands on tenterhooks.

Instead, we came to Paris with other questions. How is it possible no brand has squeezed such fidelity and power into such a compact frame before? Performance like this is usually the territory of tower systems sporting multiple decks and immense stature. There had to be a push factor that opened up a new standard.

The Devialet triumvirate â€“ Sannie, Calmel and Nardin â€“ behind the French brandâ€™s runaway success. One man each for marketing, technology and design (respectively).

By now, the leadership of Devialet are a well-rehearsed trio, committed to emphasising the importance of the tripartite ownership to the brandâ€™s success. Responsible for the elegant and demanding design that has become unmistakable â€“ while not comprising function â€“ is the stylish product and design director Emmanuel Nardin. The firmâ€™s chairman, CTO and inventor of the technology is soft-spoken Pierre-Emmanuel Calmel. The effervescent Quentin Sannie is the CEO and driving force behind marketing and partnership efforts.

The brand is now in its stratospheric growth stage with its global push, with a war chest of over 100 million euros raised in its latest round of funding. Meeting all three now, as I did, is a lifting experience; a whirlwind of arm-punching and boyish jokes that showcase the camaraderie and confidence thatâ€™s putting them on the road to tech history.

Yet things were not always so smooth sailing. A mere 14 years ago, Calmel was locked away in a rented office space, sustaining a one-man R&D programme with his depleting savings. He had just quit a stable job in a telco as an engineer. The man had his mind set on revolutionising amplification systems, a dream he had entertained since age 14, when he had already been tinkering with electronics. Yet in 2003, the sound industry at large had settled for less-than-perfect sound, favouring convenience, and his company felt his proposed projects were too far outside its scope. So he left.

Co-founder and CTO Pierre- Emmanuel Calmel left a stable job and staked all on the success of his research.

â€œIn the first six months, people were very encouraging. â€˜Thatâ€™s amazing, very courageous,â€™ they say,â€ Calmel tells The Peak. â€œBut then, 12, 18 months with no resultâ€¦ They donâ€™t talk to you any more. People will start to think youâ€™re a dreamer, and that you will achieve nothing. You can see it in the look, in their eyes.â€

Thereâ€™s a quaver in his voice, ever so slight. â€œWithout that support, it is hard. Youâ€™re working twice as hard, but with no pay,â€ he adds.

â€œBut then, 12, 18 months with no resultâ€¦ They donâ€™t talk to you any more. People will start to think youâ€™re a dreamer, and that you will achieve nothing. You can see it in the look, in their eyes.â€ â€“ Pierre-Emmanuel Calmel

Finances often looked dire, and Calmel had to take on stints as a project consultant to cover the bills. These were setbacks â€“ each delayed his personal timeline as theyÂ split his focus. There was once a very lucrative one-year contract that would have solved all his monetary woes. He declined.

â€œYou have to know to refuse some of these; they are not real opportunities. It would mean leaving my project on the table for one year. I know I would never have come back to it.â€

Mental fortitude and improvisation helped Calmel close in on the goal. â€œI made the first printed circuit boards in my kitchen,â€ he says. â€œI was very poor, so I wrote my own [code] compiler. The only tools I had were my brain, and time.â€

Yet it was this mastery between hardware and software that proved the key to breakthrough. Simply put, the electronic signals that define sound quality are handled byÂ software and hardware â€“ both of which are, understandably, created by different engineers, departments or even brands. Loss in translation is inevitable, and that detracts from a true representation of sound.

But as it turns out, a single man that can tread freely between both realms â€“ and devote his every fibre of being to solving that problem â€“ can turn out results. Finally crystallising the method to run both systems in parallel, Calmel bridged the gap with the now-patented analogue digital hybrid (ADH) technology â€“ the licensing of which now generates revenue for Devialet outside of its own products.

During the three gruelling years, he met the like-minded Nardin, who had always want to run an audio firm and fashion itsÂ products. Nardin then roped in Sannie, his cousin, who would shore up the business and marketing front. The rest is historyâ€¦ and itâ€™s still in the making.

To celebrate music and artistry, Devialet actively seeks recordings that artistes never released publicly – often pressing them into one-time-use lacquer vinyls which are then expended for discerning guests.

A single Phantom was all it took to power the Devialet Lost Recordings showcase in the Royal Albert Hall, London.

Today, the firm employs over 250 staff globally and generated nearly $100 million in sales in 2016. Its factories in France handle production end to end, for confidentiality as well as control. Thatâ€™s a long way to have come for the boy who was addicted to tinkering.Â â€œItâ€™s very moving to see so many people working for Devialet now,â€ says Calmel.

And what does he want to achieve with the brand, when all is said and done?Â  â€œThe ultimate goal is emotion. For everyone. Music is something you donâ€™t need to translate. It is universal. In that way, Devialet will bring people together.â€