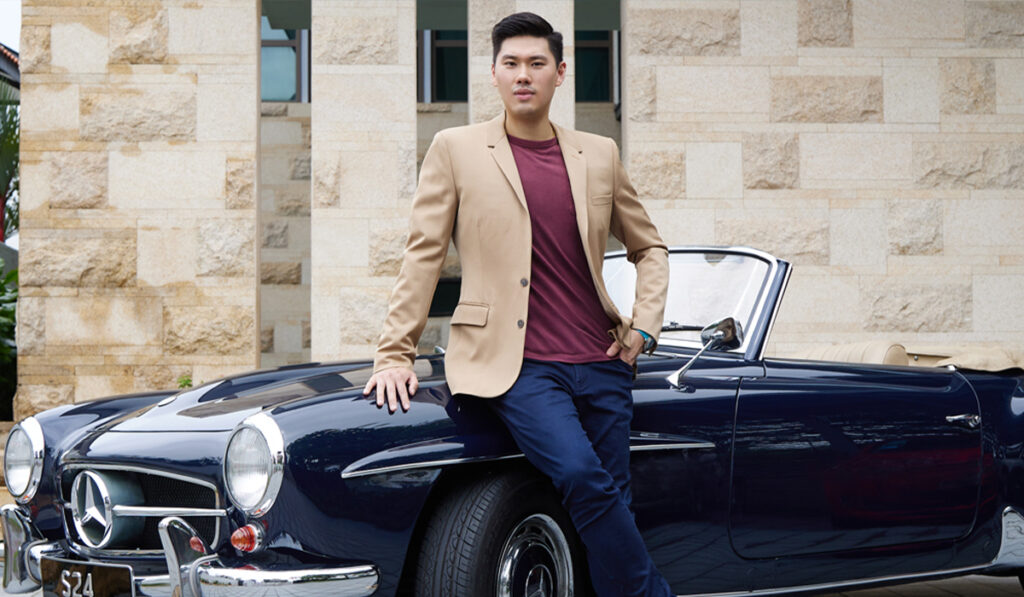 Taking after his father, Ivan Ngo has since grown his collection of vintage watches and cars from the mid- to late-1900s.
Monday, December 27, 2021 By Lynette Koh

THE RIGHT FOOT
“When I was 21, my dad gave me a Rolex Ref. 5513 Military Submariner (pictured) from 1974 that was made for the British Royal Navy. He saw it in a shop window in Chinatown in the 1990s. He liked the cool, circled T on the dial, but he didn’t know what it meant. This was before the Internet had become widespread. A few years later, with more information available online, he realised it was a military-issued watch and that the T represented the presence of tritium (a key component in certain luminous substances).”

(You may like: Meet This Year’s Five Recipients of the Rolex Awards for Enterprise)

POWER OF THREE
“When I received the Rolex Military Submariner, I researched the watch and concluded that I had to complete a ‘holy trinity’ with two Omega Seamaster 300 watches that were produced before that Submariner for the British Ministry of Defence. I like collecting watches with a military history because it shows that a watch is not just a luxury item. They are called tool watches for a reason.”

IN REVERSE GEAR
“I’ve always looked up to my dad. Although I have a law degree, I’m taking a second degree in business, so I can join his business. He likes vintage cars and watches, and his passions have become mine. He gave me his third-generation Mercedes-Benz 300SL from 1989. As with the aforementioned military watches, I decided to complete the trinity by getting the first- and second- generation Mercedes SL models, which are from 1958 (in main picture) and 1971, respectively.”

(You may like: End the year right with these Rolex timepieces)

BUILT FOR A PURPOSE
“I don’t wear my vintage timepieces much because they are not as well-constructed as modern watches, so moisture can get in. But I use my modern watches in the settings they are meant for. I’ve dived with my Rolex and Omega dive watches. I wear my Daytonas when driving my vintage cars, and my GMT watches when I’m overseas.”

A HOBBY SHARED
“One of my dad’s regrets was not buying a Paul Newman Daytona, which is one of the most sought-after vintage Rolex watches. In the ’90s, someone promised to sell him one but reneged on the deal. He also passed on opportunities to get one at a few auctions. In 2016, I managed to get a Ref. 6265 from 1970 for him. You would think he’d be happy to receive it. But his first reaction was, ‘Why did you spend so much money on this?’ He simmered down when I told him I hadn’t paid the ceiling price and that there was some room for its value to appreciate (laughs).”

(You may like: Rolex Perpetual Planet Documentary Highlights the Earth’s Environmental Challenges)