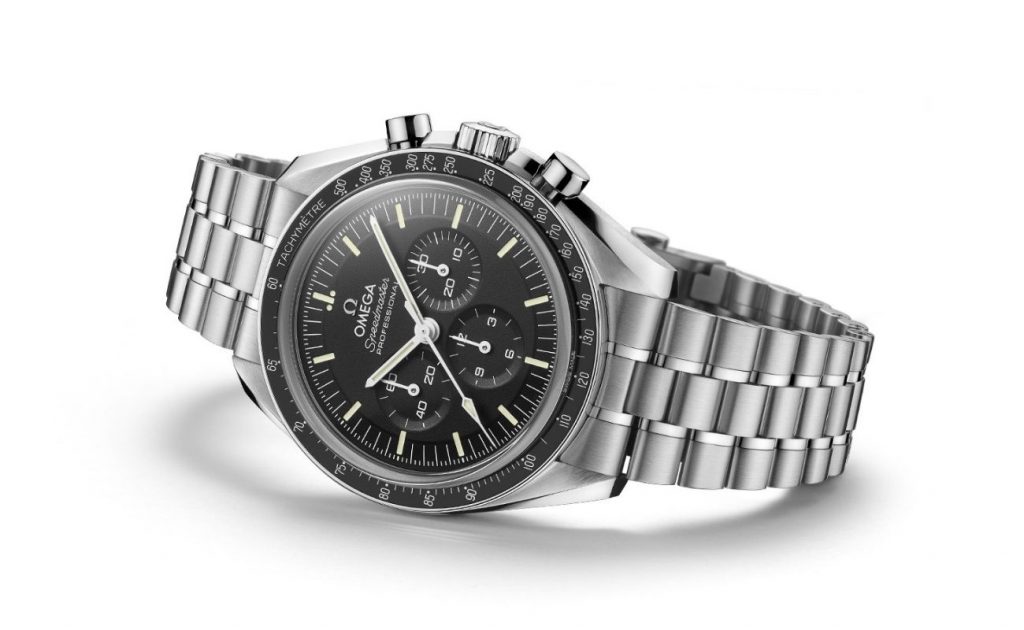 The latest version of Omega’s iconic timepiece is armed with a new movement and bracelet
Friday, February 5, 2021 By Lynette Koh

One of the true horological icons of our time, the Omega Speedmaster Moonwatch Professional recently received an update that might convince you to get one, if you aren’t among the many folks out there who already own one (or several). The chief change is in the movement used, although there have also been several vintage-based aesthetic updates to the 42mm timepiece.

Available in eight variants, including steel and Canopus white/Sedna rose gold models , the new Speedmaster Moonwatch Professional Co-Axial Master Chronometer features touches inspired by the fourth-generation model — aka ST 105.012 — that accompanied Apollo 11 astronauts to the moon in 1969. Details like a dot-over-90 (DON) bezel — literally, it refers to the presence of a dot directly over, instead of to the side of, the 90 on the tachymeter scale — might not seem like much unless you’re a serious Speedy fan.

However, as Omega president and CEO, Raynald Aeschlimann puts it: “When updating a sacred timepiece like the Speedmaster Moonwatch, every detail must be true to its original spirit. This chronograph is recognised the world over, so we’ve approached its design with the sincerest respect, while taking its movement to the next level.”

Powering the new Moonwatch is the Co-Axial Master Chronometer 3861. The ‘Master Chronometer’ moniker means that, aside from meeting the highest standards of precision and performance, the timepiece also has a magnetic resistance of up to 15,000 gauss. (Way more than we will ever encounter in our everyday lives, but it’s good to know that the watch will be impervious to the magnetic fields emitted by our many gadgets.)

On a related note, eagle-eyed ‘spot the difference’ types will also notice that the minutes track of the new Moonwatch are divided into three, instead of the previous five. This change is meant to reflect the frequency of Calibre 3861.

We’re also fans of the watch’s most obvious aesthetic change: a new five-link bracelet, based on those from the 1980s and 1990s, has a more refined appearance as compared to the previous version, and also helps it to wear noticeably smaller on the wrist. If you have wanted a previous version of the 42mm Professional Moonwatch but found it a bit too big for your wrist, this might be the version for you.

The story first appeared in The Peak Singapore