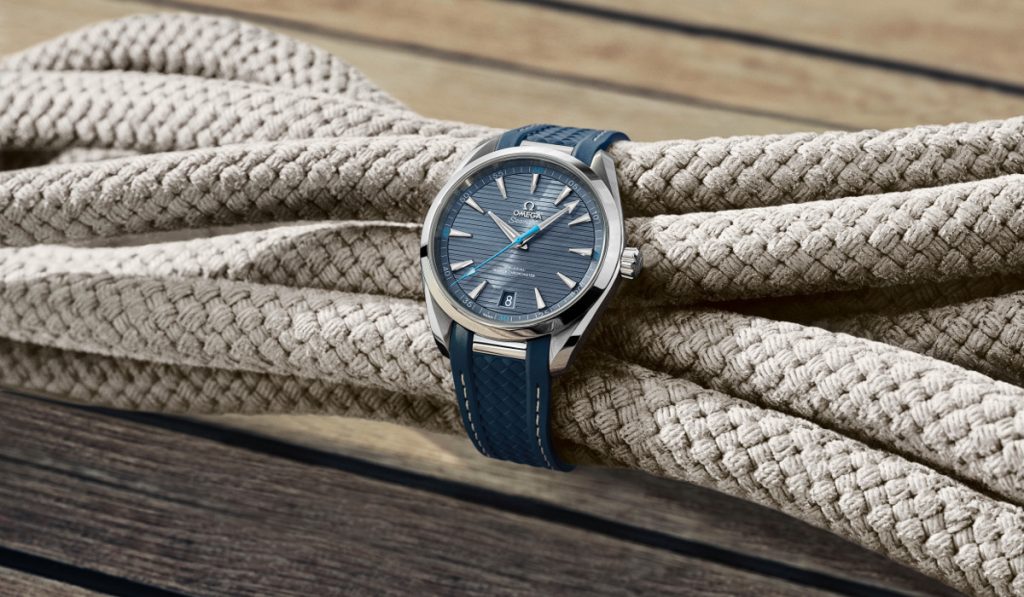 The Omega Speedmaster may have gotten a lot of attention this year as itâ€™s the 60th anniversary of the collection but the Seamaster is by far the oldest collection within Omega. Launched in 1948 to coincide with the brand’s 100th anniversary the watch was intended as a robust yet elegant watch for â€œtown, sea and countryâ€, and this year Omega has decided to offer a brand new Seamaster Aqua Terra collection for 2017.

As the years went on, there were many different renditions of the Seamaster but some would argue that the true spirit of the very first Seamaster watches was re-ignited when Omega launched the Seamaster Aqua Terra in 2002. Where the Seamaster 300 and the Seamaster Planet Ocean were designed to go deeper beneath the waves, the Aqua Terra â€“ with the latin words meaning sea and land â€“ was the watch for lighter seafaring activities. What resulted was an elegant watch that could hold its own on a night out and yet be robust enough to be worn, say on a yacht.

These days the Aqua Terra line is pretty much defined by the â€œteakâ€ pattern on its dial but funnily enough when the collection first launched in 2002, the dial was smooth. It wasnâ€™t until 2008 that Omega included this stripe pattern as a staple of the Seamaster Aqua Terra watches.

15 years since the very first Aqua Terra watches launched, Omega celebrates the anniversary with a new Aqua Terra collection that offers some very interesting re-designs along with modern updates like the brandâ€™s METAS-tested Master Chronometer certification.

Of course the most noticeable difference about the new Aqua Terra is the fact that the â€˜teakâ€™ pattern on the dial is now horizontal as opposed to vertical and Omega has also decided to re-position the date window to 6 oâ€™clock. The more subtle design changes come with the integration of the strap and bracelet into the case which supposedly make it fit more comfortably on the wrist and they have also borrowed the, much loved, twisted lugs of their Speedmaster collection for the watch. On the technical side, the one major change to the movement is that the new 2017 Seamaster Aqua Terra watches, both for men and women, will be Master Chronometer certified. This means that the watch will be tested underwater, tested for the deviation under different power reserve levels, tested with magnetic fields of up to 15,000 gauss and of course tested so that the average daily chronometric precision of these watches are the best it can be.

If youâ€™re still not convinced, hereâ€™s Eddie Redmayne on a yacht with a Seamaster Aqua Terra on his wrist. We have to say, itâ€™s looking pretty damn good.

Like what you see? You should be able to find the new Omega Seamaster Aqua Terra collection in a Omega Boutique in Kuala Lumpur pretty soon.