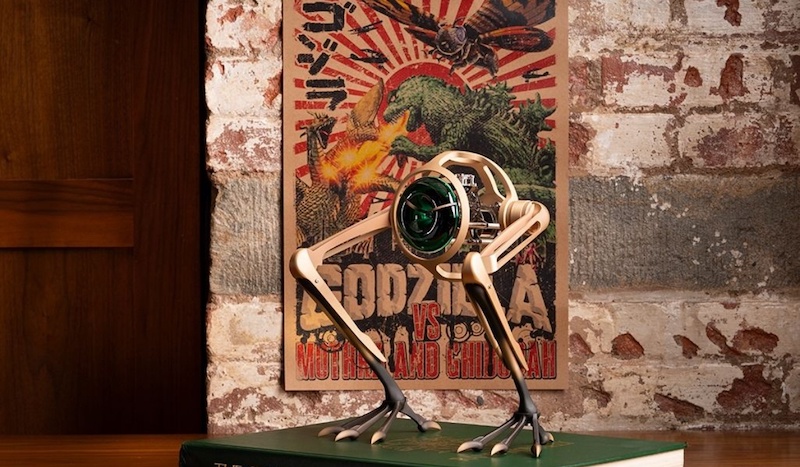 A collaborative trio of MB&F, L’Epee and Massena Lab lends itself to an exquisite timepiece that brings the concept of time just about two steps further
Wednesday, December 23, 2020 By Alvin Lim

Picture this: an ultra-luxurious, Murano hand-blown glass-dialled clock made out of over 130 components, housed in a bronze skeleton modelled directly from actual Tyrannosaurus Rex bones. If you can’t, don’t worry: MB&F, L’Epee and Massena Lab have created one for you.

The T-Rex Bronze is a showcase of what happens when Swiss horological artisanship meets American ingenuity. Despite its less than elegant name, it is anything but. It’s a tad irreverent, yes, but the bold three-way timepiece easily straddles the fine line between kooky and luxe with all the elegance of, well, T-rex inspired claws.

Just to clarify, this isn’t the first high-end table clock that Swiss watchmaker MB&F have created: it did it once for last year’s Only Watch auction, before repeating the feat with  a stainless edition in collaboration with L’Epee (answering the question: what’s better than one Swiss horological grandmaster?)

The clock was actually inspired by a gaudy blue Christmas ball sitting on a pair of chicken legs that MB&F founder and CEO Maximillian Busser had for years. Bringing William Massena, founder of New York-based Massena Lab, into the project resulted in what we see today: the T-Rex Bronze.

The bronze part of the equation isn’t just for product differentiation – only 15 pieces of the limited edition clock have been produced – but also a play on the clock’s ancient inspirations. After all, the Bronze Age is what catapulted humanity forward so many millennia ago. The rich brown patina of the entire bronze structure, just like the T-rex fossils that were 3D scanned when modelling the legs, are also locked in time by a special hand-oxidisation process.

The standing clock is priced at USD27,000 and can last for up to eight days when fully wound.