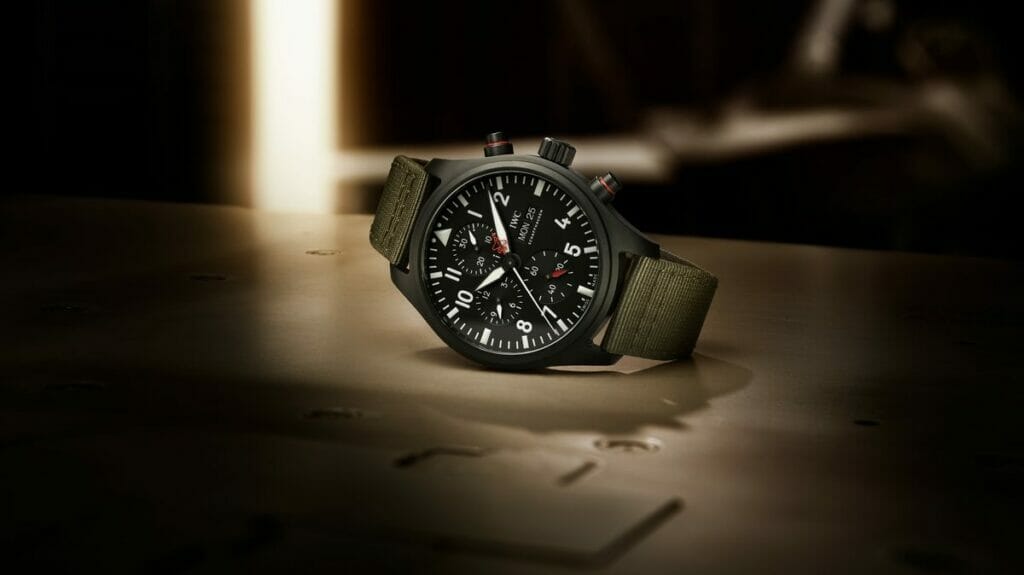 Since 2007, IWC has been making Top Gun pilot’s watches as an official licensee of the US Navy. (The company’s history in aviation timepieces, of course, goes back even further — it made its first Pilot’s Watch more than 80 years ago.) But in 2018, IWC made two very special watches dedicated to the US Navy Naval Aviation Community, one of which was the Pilot’s Watch Chronograph Edition “Strike Fighter Tactics Instructor”, a timepiece in black ceramic that was available only to TOPGUN graduates. Now, it launches a new model inspired by that watch, but which can actually be bought by the many of us who have never been in a dogfight —  the Pilot’s Watch Chronograph Top Gun Edition “SFTI” .

The engraving on the caseback makes clear the timepiece’s antecedents

With all these lengthy names and acronyms, let’s pause for a moment to get the terms straight: TOPGUN is the nickname for what began in 1969 as the United States Navy Fighter Weapons School, and is now known as the United States Navy Strike Fighter Tactics Instructor Program. Founded in response to the poor combat performance of US Navy fighter aircraft in the Vietnam War, its raison d’etre is to teach top naval pilots in the US how to become better pilots and better instructors — graduates subsequently transmit what they have learnt to their squadrons. Today, of course, TOPGUN has reached legendary status and is the stuff that naval-aviation dreams (and Hollywood classics) are made of.

During the recent virtual launch of the new SFTI edition timepiece, Jim DiMatteo — a TOPGUN alum and now-retired Captain of the US Navy, who has clocked more than 5,000 hours in five different fighter jets — attested to the robustness of the brand’s aviation timepieces. Sporting the exclusive Pilot’s Watch Chronograph Edition “Strike Fighter Tactics Instructor” on his wrist, he talked about the hard knocks and g-forces that a watch is subject to during a flight, adding with a smile: “This watch has flown in a fighter jet more than 200 times. It survives the flights better than I do.”

That robustness characterises the new watch, which is limited to 1,500 pieces. Complementing a 44mm case of black ceramic are a caseback, chronograph pushers and a crown made of Ceratanium. A material developed by IWC, Ceratanium is a combination of highly scratch-resistant ceramic and lightweight titanium. The combination of materials gives the new model a matte-black aesthetic similar to that of the timepieces that inspired it, with a jet-shaped counterweight (we love this touch) and the small seconds hand adding sporty red accents. Powering the watch is the IWC in-house 69380 calibre, a robust, automatic column-wheel chronograph movement. Definitely one to consider for those missing taking to the skies right now, even if more as passengers than pilots.