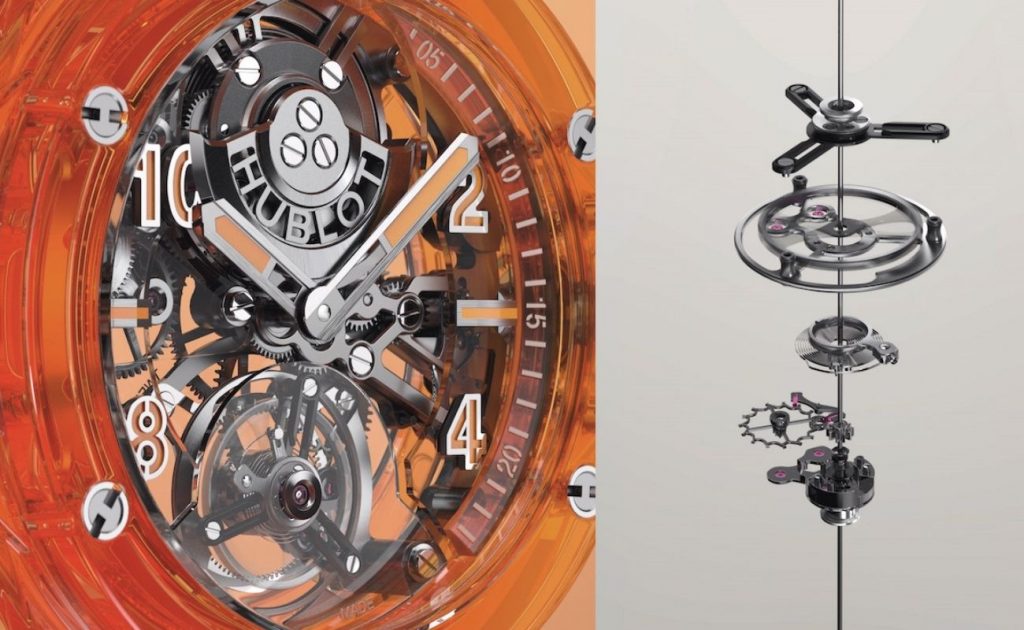 Not many brands would debut a new tourbillon movement in an orange watch, much less one made of pricey orange sapphire (a world first), but such bold moves are exactly what has given Hublot its love-it-or-hate-it status.  The Big Bang Tourbillon Automatic Orange Sapphire is powered by the brand’s first automatic tourbillon movement, HUB6035. The tourbillon movement is unusual in being self-winding (most are manually wound). It then demands further attention with a striking design that positions the micro rotor at 12 o’clock to mirror the tourbillon at 6 o’clock. A transparent dial and three bridges made of sapphire focus attention on the movement.

Last year, Hublot debuted the Big Bang Integral in titanium, King Gold and black ceramic. It was the first time the brand’s signature Big Bang model featured an integrated bracelet. However, Hublot CEO Ricardo Guadalupe is well aware that competition in the steel-watch arena is stiff, which is why his brand is playing to its strengths by focusing on high-tech ceramic instead. This year’s Integral models come in 42mm cases in white, navy blue or grey ceramic.

The first collaboration between Hublot and famous Japanese contemporary artist Takashi Murakami was launched on January 26. When we spoke to Guadalupe three days later, he shared that he had asked Hublot’s “more than a hundred” boutiques worldwide to stop accepting deposits as the 200 pieces made had sold out even faster than expected. Playfully mixing Hublot’s all-black signature palette with a freely moving, black diamond-studded version of Murakami’s smiling flower, the timepiece comes in a 45mm black ceramic case and is powered by Hublot’s own HUB1214 Unico movement.