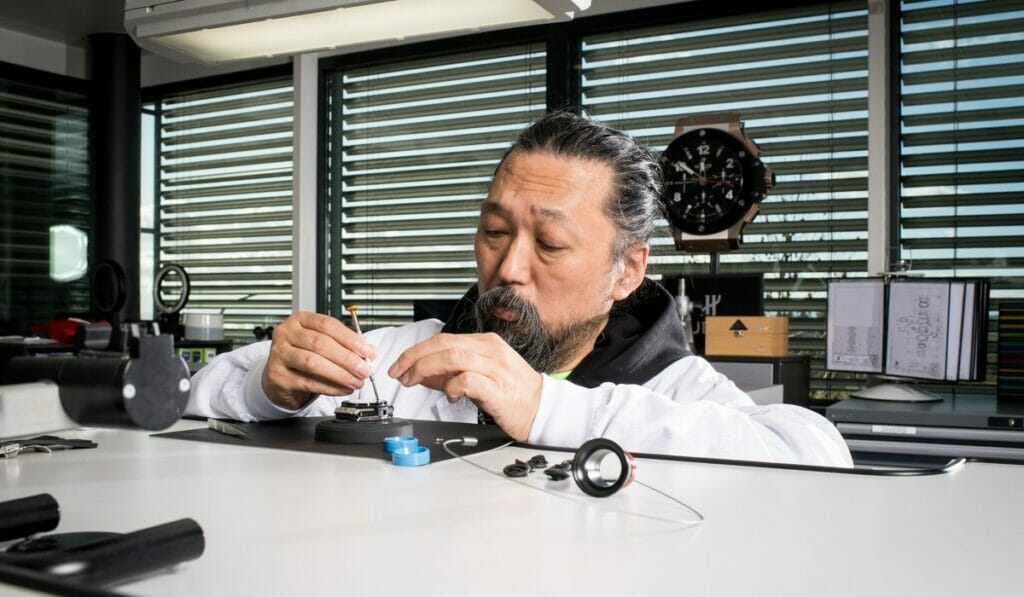 “Sometimes, collaborations with watch companies only involve printing on the packaging,” says renowned Japanese contemporary artist Takashi Murakami, in a video for his first horological co-creation with Hublot. He continues: “I used to say I would only collaborate if I could be fully involved.” Just launched as part of the recent LVMH Watch Week, the Classic Fusion Takashi Murakami All Black is definitely not a half-baked collaboration with, say, an artist’s signature motifs randomly slapped on it.

Murakami’s artistic style will be familiar to many, even if they do not follow the goings-on in the art world — thanks to his high-profile and mega-successful collaboration with Louis Vuitton that began in 2003 and only ended in 2015. Seen not only on leather goods, public spaces and Kanye West albums, the artist’s signature themes include smiling flowers, big-headed cartoonish figures and plenty of bright colours.

Which is why it might initially seem surprising that the artist’s first collaboration with Hublot, the Classic Fusion Takashi Murakami All Black, is, well, entirely black. However, we love that the Murakami smiling flower has been incorporated in a far cooler way, as opposed to, say, merely having an illustration on a dial, that also stays true to the Hublot all-black signature. The artist undoubtedly became pretty familiar with Hublot’s workings after his first visit to the brand’s manufacture in Nyon, Switzerland, last February.

Taking centre stage in this ceramic watch, the flower glitters with 456 brilliant-cut black diamonds on its 12 black-plated petals and 107 more on its beaming face. Thanks to a ball-bearing system developed by Hublot, the petals spin freely when the watch is worn on the wrist, creating a subtle but eye-catching effect: you can see the light playing off the 45mm timepiece on Murakami’s wrist in the launch video.

Black diamonds adorn the smiling flower on this watch

The flower-shaped crown of the timepiece

Making things even more interesting, the centre of the flower is mounted onto the sapphire crystal, heightening the three-dimensional effect — a contradiction to the Superflat characteristic of two-dimensionality, perhaps, but one that we definitely welcome.