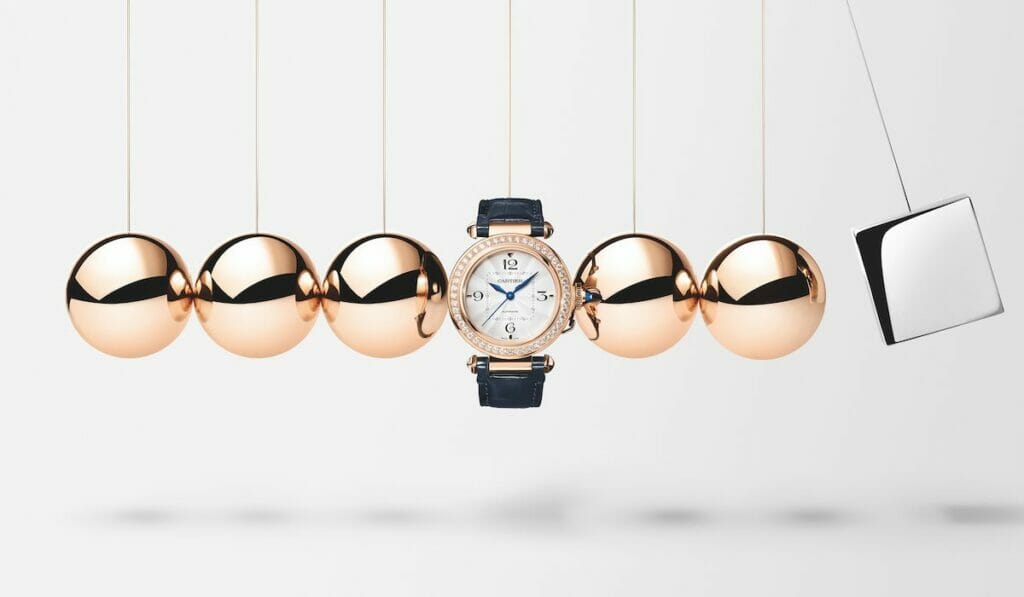 The house’s round watch, Pasha de Cartier, is being relaunched.
Sunday, December 13, 2020 By Lynette Koh

Round watches are, by far, the most popular type of timepieces globally. With the sheer number of such pieces on the market, it is perhaps unsurprising that many look alike. There are exceptions, of course, such as those that have emerged from the Cartier universe. Consider the distinctive Ballon Bleu de Cartier with its round, sculptural case and a protruding cut-out space housing its blue bubble of a winding crown. This year, the house relaunches one of its most iconic round timepieces, the Pasha de Cartier, demonstrating again how it is possible to create a unique style based on the world’s most common watch shape.

Explaining why Cartier is relaunching the Pasha de Cartier collection, first introduced in 1985, the brand’s Image, Heritage and Style Director Pierre Rainero shares via e-mail: “Pasha is a Cartier signature with a strong following among our core clientele in Europe, America and Japan, who are still expecting its comeback. Following the relaunches of iconic shaped watches such as Panthere de Cartier, Santos de Cartier and Baignoire, now is the perfect time to relaunch an iconic and distinctive round shape, especially in a competitive conventional market.”

The new Pasha timepieces certainly stand out from the crowd. Featuring a design derived from a 1943 special-order timepiece, the Pasha has a few distinguishing details. It features a square inside a circle – a square minute track within its circular dial – that provides simple yet stark contrast.

Four oversized Arabic numerals create a strong visual impact on a minimalist background. Our favourite Pasha feature, however, is its whimsical yet functional chained crown. A mini chain holds a fluted crown cover topped by either a sapphire or a blue spinel. The tiny space beneath the chained crown can be personalised with an engraving. In the new models, the brand has topped the crown with a sapphire or blue spinel as well. On customisability, the watches come with straps or bracelets that are easily interchangeable, thanks to the brand’s QuickSwitch clasps. The bracelet also features a SmartLink system that lets you resize it without tools.

While its inspiration was a 1943 custom timepiece with a chained crown and a protective grid over its dial, the first yellow gold 38mm Pasha de Cartier timepiece was named after a powerful Moroccan tribal chieftain. “It was a tribute to a prestigious client of the maison and a great watchmaking connoisseur, the renowned pasha El Glaoui of Marrakech,” says Rainero. “This masculine round watch quickly became a cult hit, setting the trend for big watches and was soon worn by women as well.”

Showcasing its versatility, the Pasha has been updated in numerous ways since 1985. To mark its 10th birthday in 1995, Cartier created the Pasha C range of steel designs. In 1998, there was the Pasha 32mm, only available in gold, with diamonds and a removable grid as well as interchangeable leather straps. The year 2005 saw the launch of the Pasha 42mm, a subtle redesign of the original Pasha, and powered by a manufacture movement.

In 2009, Cartier launched a ‘playful and trendy’ collection called Miss Pasha, featuring a 27mm case with colourful dials and crowns. Its 2020 relaunch sees it introduced in a slew of variations. Powered by the automatic in-house calibre 1947 MC, the new Pasha de Cartier models come in two sizes: 35mm or 41mm. The collection includes models in steel, pink gold or yellow gold, gem-set models in gold with diamond bezels to a fully diamond-set white gold edition, and skeletonised versions – with or without a tourbillon. It’s a comprehensive relaunch that leaves no room for doubt that a horological icon is back.