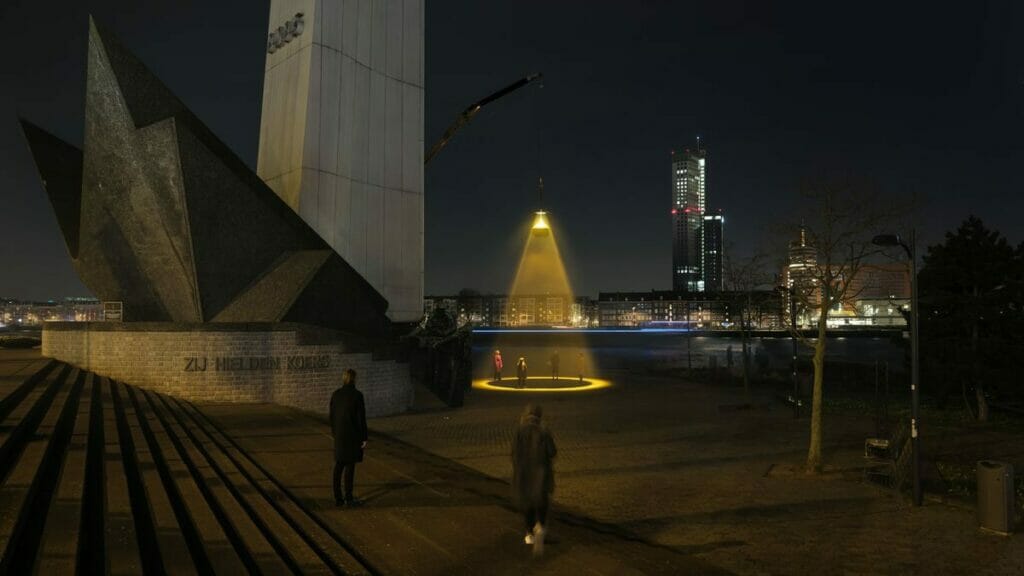 The latest oeuvre by Dutch designer Daan Roosegarde is inspired by the sun’s purifying glare
Tuesday, March 9, 2021 By Alvin Lim

Studio Roosegarde, headed by its namesake and Dutch artist Daan Roosegarde, returns with the Urban Sun – an installation that bridges art and science through the powers of illumination. To be precise, a specific form of illumination known as UVC lighting that, to a certain extent, is capable of eradicating virus particles from the air. Yes, that includes Covid-19.

Though ultraviolet lights’ usual wavelength of 254 nanometres is harmful to humans as well as viruses, the 222nm far-UVC lighting that Urban Sun emits is capable of sanitising viruses safely – though, according to peer-reviewed research by scientists from Columbia University and Hiroshima University, it takes around 25 minutes to achieve 99.9% of viral inactivation. That said, the scientists also found that by the eight minute, about 90% of the viruses have been killed.

Its applications are obvious – far-UVC light can be generated from cheap excimer lamps that can be deployed in occupied public locations as an extra layer of protection on top of wearing masks, social distancing and getting vaccinated. More than that, though, it’s a potential smart solution that combines virus suppression – especially relevant in a time of foretold superbugs – with public infrastructure.

Says Roosegarde: “Suddenly, our world is filled with plastic barriers and distance stickers, and our family is reduced to pixels on a computer screen. Let’s be the architects of our new normal and create better places to meet and interact.”

The significance of such tech in Malaysia, which is sunny all year round with plenty of UV exposure, is a little muted. It’s far more relevant to, say, Roosegarde’s home country, the Netherlands, and other European countries. They experience far less sunlight – especially during their ongoing winter months. There’s also been plenty of evidence to suggest infection rates outdoors are far lower.

That, however, isn’t really the point. Urban Sun isn’t an hitherto unknown panacea to epidemics. Instead, the art piece – aptly debuted at Rotterdam’s iconic Erasmus Bridge – is meant to be a beacon of hope moving forward. The sun, long associated with virility and life, now heralds a return to normalcy, the end of social isolation and the new normal.

Other projects by Studio Roosegarde include a luminous celebration of sustainable farming, a smog-scrubbing air ioniser that purifies the air around its structure, and a glow-in-the-dark highway – cementing the studio as a group dedicated to revolutionising solutions for the 21st century and beyond.