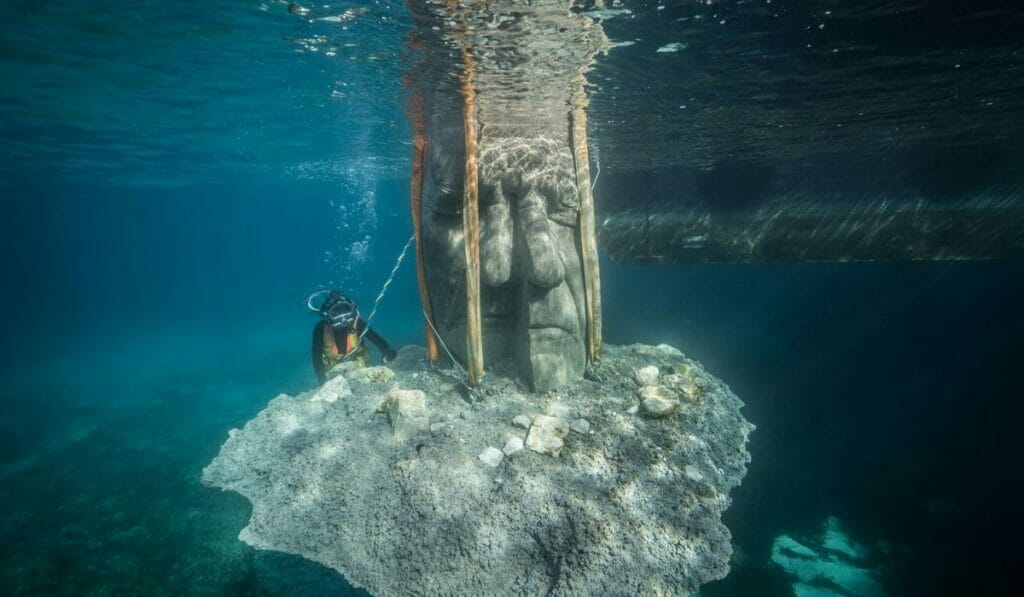 It’s situated near one of the Lerins islands just off the coast of Cannes, France, and it features impressions of local residents immortalised in cement
Thursday, March 18, 2021 By Alvin Lim

British artist Jason deCaires Taylor’s affinity for sculpture and the seas isn’t much of a mystery. He’s created a multitude of installations both above and below the sea from London to Lanzarote. These installations, typically hewn from non-toxic concrete or stainless steel, are often configured to facilitate ecological growth while being just remote enough to draw tourists away from at-risk reefs or seas. More than that, there’s an added layer of social commentary behind each collection – for example, a watchful, solar-powered guardian that watches after the Great Barrier Reef.

It’s art and activism in equal measure, a dialogue that deCaires Taylor hopes to keep flowing with each new sculpture. Most recently, that means the recently debuted Underwater Museum of Cannes, a project four years in the making.

The museum consists of six sculptures, each weighing over 10 tonnes and textured to entice the growth of flora and fauna. They’re fashioned after local community members across a range of ages and professions, from a 80-year-old fisherman to a nine-year-old student. The outer parts of these three-dimensional portraits are made to look like masks, a call-back to the island of Sainte Margeurite’s prominence in classical literature as the location of The Man in the Iron Mask’s prison.

Apart from the reference to Dumas’ work, the split mask also works as a metaphor for the ocean itself – resilience and vulnerability simultaneously. Despite its primordial strength, decades of pollution and exploitation are taking its toll. And with the sculptures, the subtext is clear. Anyone can do their part – and everyone is affected.

These oeuvres, unlike some of his others, are placed at a relatively shallow depth of two to three metres – which also means they’re accessible without having to go through a three-day scuba diving course. Just strap on an eye mask and descend through crystal-clear waters into the beautiful sea grass meadows below. Beautiful sea grass meadows that also happen to play important roles as habitat for ocean life and oxygen producer.

Another boon to the project’s location was the removal of disused marine infrastructure. Debris like old engines and pipelines (not particularly known for their long-term eco-friendliness) were fished out, and the site was simultaneously cordoned off from boats to keep divers, fauna and flora alike safe.

The underwater museum marks deCaires Taylor’s first appearance in the Mediterranean Sea and was funded by the Mairie de Cannes, the city’s city hall. It’s been open for visitors since February. At the very least, it’s well worth a visit should you happen to be in the area (possibly attending world-famous film festivals).