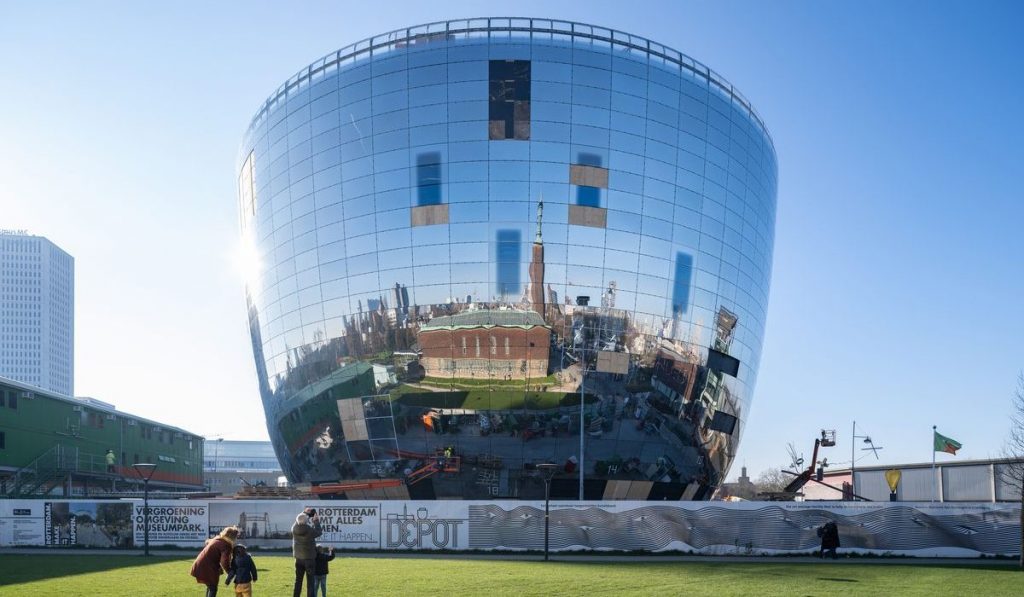 And that’s before you consider the 151,000 artworks stored in the world’s first publicly accessibly art depot in Rotterdam
Friday, December 18, 2020 By Alvin Lim

There’s far more to art than what you’re getting in museums. We aren’t just talking about hidden meanings or obscure histories to celebrated oeuvres, though: art pieces themselves usually spend more time in storage than at actual exhibitions. Only six to seven per cent of art sees the light of day at any one time, reads a line on Dutch architecture firm MVRDV’s website. Uncovering the remaining 94% – or at least 151,000 of those artworks – is the raison d’etre for the Depot Boijmans Van Beuningen, smack in the middle of Museumpark, Rotterdam.

The ovoid, top-heavy structure is a reflection of the museum’s self-described ‘utterly democratic’ nature. Its covered by 1,664 mirrored panels that serve to reflect everything around it – passers-by, the rest of Museumpark and Rotterdam itself. The 15,000 sq m building blends almost mirage-like into the surrounding architecture, and the design of the structure leaves plenty of room for nearby footpaths and greenery.

The Depot Boijmans Van Beuningen is a reflection not only of itself, but also the city of Rotterdam

As it’s a depot, artefacts will be stored and exhibited according to their climatic requirements instead of era or movements, namely metal, plastic, organic, inorganic and photography. Almost the entirety of the building (and its artworks) can be accessed without a guide, with the remaining artworks available upon request.

Another unique facet of visiting an art depot instead of a museum is getting a closer look at the maintenance of art. The atrium’s quintet of massive, zigzagging stairways that evoke Piranesi’s etchings lead to observation rooms, where visitors can get an insider look into the conservation, restoration and transportation of prized art pieces.

Says Sjarel Ex and Ina Klassen, Directors of Museum Boijmans Van Beuningen: “This is something that the inhabitants of Rotterdam will be proud of; something that they want to see with their own eyes, because they partly own this enormous artistic treasure.”

The depot will have a rooftop forest, populated by 75 birch trees

The Dutch are big on their innovative use of urban spaces – which is why they’ve opted for a rooftop forest rather than garden, populated by 75 birch trees specially bred in a tree nursery for three years. Apart from the greenery, you’ve also got a stunning view of Rotterdam’s skyline.

While there are numerous exhibition and curators’ rooms, it’s open season for how you opt to view the rest of the oeuvres. If you’re worried about losing the curator’s touch, remember that the museum is all about democracy. The experience of art is subjective, ephemeral and always refreshing – as long as you’re willing and receptive to do something you’ve never done before.

The museum will officially be opened next year.