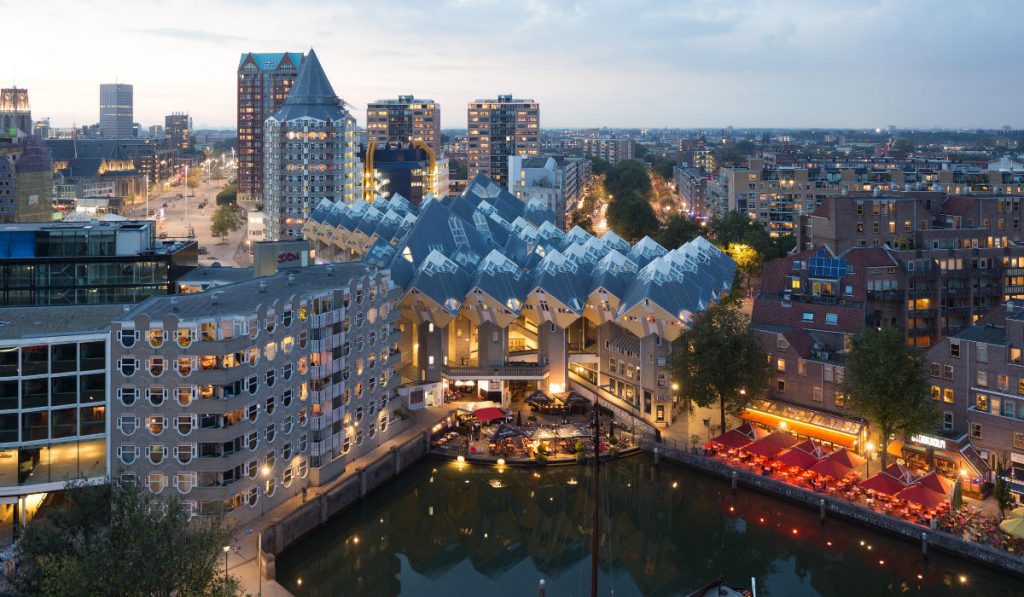 When the Germans rained down all hell on the Dutch city of Rotterdam some 70 years ago in the 1940 Rotterdam Blitz, little did the world know that this port city would rebuild itself to fantastic proportions. Like a phoenix rising through the ashes, the city brushed off its charred remains and launched its own round of bombardmentâ€“this time, of architecture.

I was told that the only way one should arrive in Rotterdam is by train. Many things were said about Rotterdam Centraal Station â€“ the cityâ€™s gatekeeper that welcomes nearly 110,000 local and international passengers on a daily basis, but the loudest praise was heaped on its design. With my interest piqued, I hopped onto the iconic yellow and blue trains from Schiphol and made my way down south. The train ride may be as flat as the Dutch landscape but once I stepped out into the cold, crisp air, I could feel a bubble of excitement forming in my chest. After all, Rotterdam is the place they call an architectâ€™s playground and I was jumping into the sandbox.

Traipsing through the wood and glass station hall, thereâ€™s an atmosphere of generosity and ease despite the steady stream people hurrying around. Making my way out of this airy space, I let my eyes adjust to the daylight and pivoted to come face to face with my first architectural liaison in Rotterdam. It was glorious. Like the blade of a samurai, the angled roof slices into the cloudless blue sky. Partly covered in solar panels, the silver roof points towards the city centre, signalling the cityâ€™s bold spirit in charging into the future. But the past is not forgotten, though, as this towering structure by Benthem Crouwel Architekten, MVSA Meyer & Van Schooten Architects and West 8 proudly spells its name out in the same lettering of the original 1957 Sybold van Ravesteyn station building along with the historic clock.

Continuing my journey forward on Kruisplein, I notice a glorious display in jewel green blue and shades of brown. At first, it seemed like the artwork was a three dimensional piece that recessed into the building, but I quickly realised that it was in fact a beautifully painted mural that crowns an intimate Mediterranean restaurant below called Ayla. This trippy piece was created by French artist Astro who was called upon by Rotterdam Street Art Museum in an endeavour to create the most beautiful outdoor street art museum in The Netherlands. Evidently, there was a love for art in the city as well.

However, I had another very specific piece of architecture to discover and made my way to the Laurenskwartier district. I have to admit that this walk was possibly the best stretch my neckâ€™s ever had as my head continuously swivelled left and right in discovering numerable impeccable designs. Bent red lampposts not unlike dockside cranes lined the Schouwburgplein square, a towering steel sculpture by Gabo stands next to De Bijenkorf luxury department store on Coolsingel and an a depiction of Erasmus â€“ a Rotterdammer himselfâ€“stands next to Laurenskerk, the cityâ€™s only surviving late Gothic structure.

But soon I arrive at the piece de resistance of Rotterdam architecture; Markthal. â€œWhat on earth…â€ These words that escape my lips when I first lay my eyes on this oddly shaped building. With its horseshoe shape and multicoloured interior, it was equal parts impressive and comical. The brainchild of Dutch architect firm MRDV, this 40-metre tall structure marks a new wave of architecture where form, function and sustainability come together seamlessly. The arch that sits atop the food market is no mere covering, but in fact an apartment complex. Peering in from the outside, thereâ€™s no missing the vivid artwork spanning across the ceiling akin to a contemporary version of the Sistine Chapel. Named â€˜Horn of Plentyâ€™, the cornucopia of oversized market produce, flowers and insects by Arno Coenen and Iris Roskam blaze across the ceiling to reflect the food and life buzzing down below.

The ceilings of Martkthal is decked with the biggest artwork in The Netherlands, â€˜Horn of Plentyâ€™ by Arno Coenen and IrisÂ  Roskam.

Waltzing through the rotating doors into the food hall, my windswept form was immediately embraced in a warm embrace perfumed with mouth-watering aromas from stalls and restaurants assembled inside. With around 100 fresh food stands, food shops and various restaurants, thereâ€™s little wonder why itâ€™s called a food Valhalla by the locals. And much like the Norse warriors who feast daily in the mythical hall, locals and tourists alike convene here for the ambrosial food. Exploring the market one bite at a time, my senses were teased by every stall I passed. â€œCome over and try meâ€ these seductive bites beckoned. Produce as vivid as the mural above, heaping piles of gourmet nuts, massive wheels of cheese and warm, sticky stroopwafels were the sirens. Hungry visitors to the food paradise can snack on the go or sit down for a tasty meal at any of the food stalls with â€œrooftop diningâ€ to take in the bustling atmosphere.

Cube Houses designed by Piet Blom nestle together as a cubist forest.

Standing in this square in front of the Markthal, I chuckled at the mischievousness of the cityâ€™s architects in constructing the mosaic of buildings in this historic area. Itâ€™s a playful patchwork as the Central Library reminds me of a toy with its cascading facade and bright yellow tubes running down the sides. The Markthal looked like the pencil sharpener to Het Potlood (Pencil Tower) designed by Dutch architect Piet Blom, who was also the mastermind behind the iconic Cube Houses, just a few hundred metres away. The Cube Houses or Kubuswoningen are literally cubeshaped homes that cluster together to form an abstract forest as envisioned by Blom. Each cube is tilted to 45Â° and rests on a hexagonal pylon- a cubism tree. The design was not done on a whim, as it is engineered to optimise the space inside by allowing for better distribution of rooms inside. A visit to the show cube Kijk-Kubus proved to be quite a trippy experience. It took a while to get used to the slanted walls, but it was tremendous fun to feel the space grow and narrow as I climbed up each level. The pointed top was especially interesting as numerous windows allowed me to peek into the bedrooms below, look up into the bright blue sky and wave at a neighbour. Another interesting element to the Kubuswoningen is its secondary purpose as a pedestrian bridge over the busy Blaak Street.

I made my way across this geometric forest of bright yellow homes, I seemed to have stepped back in time as I emerged at the harbour of Oude Haven. First emerging in the 14th century as a jetty, it blossomed into the heart of the Port of Rotterdam in the 1900s. Though nearly wiped out in the 1940 bombardment, it still retains its historic charm as it serves as a small shipyard where old ships restored to their original glory sit moored in the harbour. Europeâ€™s first skyscraper, Het Witte Huis also still stands in defiance to the rain of fire and fury hailed down by the Nazis. While there are many quaint cafes and bars that pepper the sidewalk, I opted to admire this sight from the chic interiors of Restaurant Fitzgerald.

From the inside of this Italian-marbled, turquoise-walled contemporary restaurant, I had the perfect vantage of the UNESCO World Heritage acknowledged office building. Danny Gonzalez, owner of the restaurant quickly walks over and clasps my hands warmly in greeting. â€œCan I offer you a drink?â€ he offers and pours me an aromatic glass of Grauer Burgunder. How can one refuse a drink in an establishment named after the bon viveur author of The Great Gatsby? â€œToo much of anything is bad, but too much Champagne is just right.â€ Guided by this boisterous F. Scott Fitzgerald quote, the one Michelin star restaurant carries a selection of almost 1000 wines from around the globe. Of course, these wines serve to highlight Chef Remco Kuijpersâ€™ eclectic international dishes. Taking a bite of his buttery veal sweetbread served with butternut squash, I get the sense that all the creativity doesnâ€™t just stop at the architecture, it permeates into the psyche and plates of Rotterdamers. The sentiment proved to be true as I savoured the sirloin steak of Rubia Gallega topped with lentils du puy and a wonderfully fresh dessert of ice cream paired with fennel soaked pineapple and herbed sauce. Throughout the meal, Gonzalez generously offered an assortment of wines that complement the complex flavours of the dishes served. â€œAt Fitzgerald, we celebrate the love of life, the international spirit of Rotterdam!â€ he shares.

Restaurant Fitzgerald offers the best of Rotterdamâ€™s creative spirit on a plate.

Now that I was sufficiently watered and fed, it was time to explore the artistic side of the city. Rotterdamâ€™s Axis of Art can be found at Witte de With peppered with numerous art galleries, cultural institutes and fashion boutiques. Urbane street art deck the sides of buildings, whetting my art appetite as I enter the enclave of Museumpark where the vital art institutions of Rotterdam congregate. Thereâ€™s the Museum Boijmans Van Beuningen, one of the oldest museums in The Netherlands that houses a collection ranging from medieval to contemporary art, including the works of Rembrandt, Claude Monet, Vincent van Gogh, and Salvador DalÃ­. Those whoâ€™d like to dive further into the world of architecture can pop into Het Nieuwe Instituut, the Museum of Architecture, Design and Digital Culture or Huis Sonneveld, a spectacularly preserved 1933 hypermodern home build in the Dutch functionalist Nieuwe Bouwen style.

But the best representation of art and design coming together in perfect harmony comes in the form of the Kunsthal. Designed by world-famous architect Rem Koolhaas, the iconic building is one of many faces. Every facade differs from one another, one side it appears unassuming but on the other it opens up to the world. The exploration of art begins before you even set foot inside, but once you do itâ€™s another visual treat as the several ramps spiral through the building, leading to different exhibition spaces. What I liked about Kunsthal were the fluid exhibitions that continuously flow through the institution. They pride themselves as being â€˜magic boxâ€™ â€“ not a museumof new ideas and unique methods of presenting art. I witnessed this for myself as multiple fabric artwork draped from the ceiling as I climbed up a ramp and an entire floor was dedicated to hyperrealism sculptures that stood unguarded from glass cases or barriers.

Standing by the banks of the Nieuwe Maas river, I recall the words of Winston Churchill as the sun sets its last golden rays on the towering De Rotterdam glass skyscraper. â€œWe shape our buildings; thereafter they shape us.â€he famously uttered after the end of World War 2. However, I beg to differ as the amalgamation of serious, fun and playful architecture in this southern Dutch city only proves that it is the pioneering spirit of Rotterdammers and their penchant for defying the norm that shaped this city into the whimsical, wacky architectural playground that it is today. And letâ€™s be honest, who wouldnâ€™t want to play in a city like this?