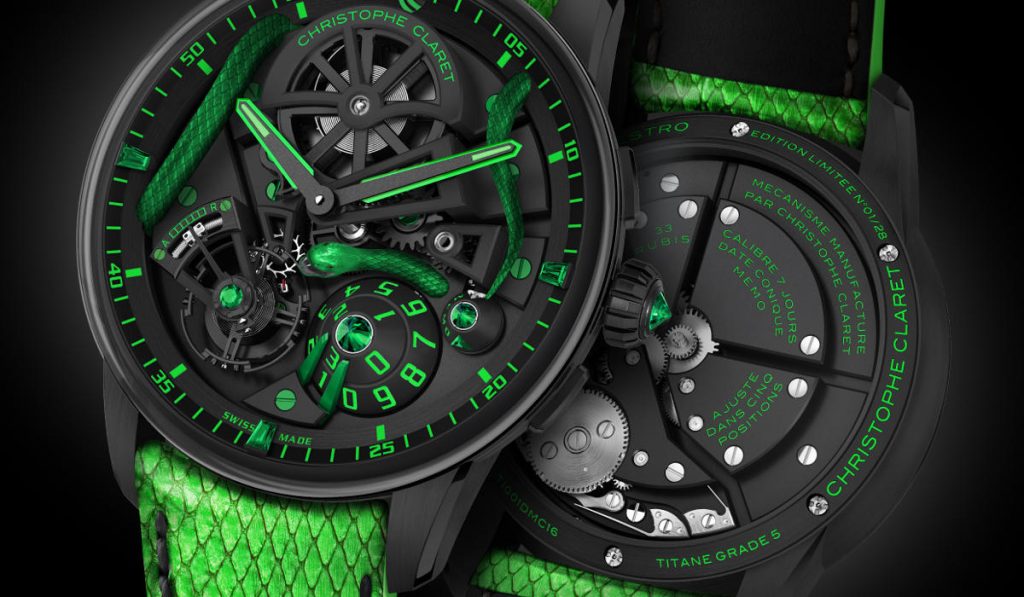 Celebrating the exciting appeal of the dangerous green mamba snake is one thing, but to also highlight the African jungle where the snake is from is an outstanding idea – and the new Maestro Mamba from independent watchmaker, Christophe Claret, does both of these things quite successfully. In the wild, the vivid green of the mamba evolved as a way for the snake to stay hidden as it waits to ambush its prey but, on the watch, the green mamba, in contrast with the matte black of the movement, catches the eye. Highly venomous in the wild, the mamba bears its fangs as it coils around the DMC16, mechanical hand-wound movement, and, thanks to the multidimensional architecture of the calibre, the effect is even more pronounced.

What makes this watch even more amazing is the fact that the strap is made from authentic green mamba skin, hunted in Mozambique, on a piece of land that belongs to the owner of the largest tsavorite mine. And thus, the green stones you see on the watch are not emeralds as one would expect but rather tsavorite, a stone native to Africa. Additionally, the watch does come with a very practical memo function that can be set as a reminder to perform a task or simply as a tool to remind the wearer of an upcoming event. The watch beats at 3Hz (21,600vph) and has a power reserve of seven days.

The Maestro Mamba is a limited edition of 28 pieces retailing at CHF96,000.