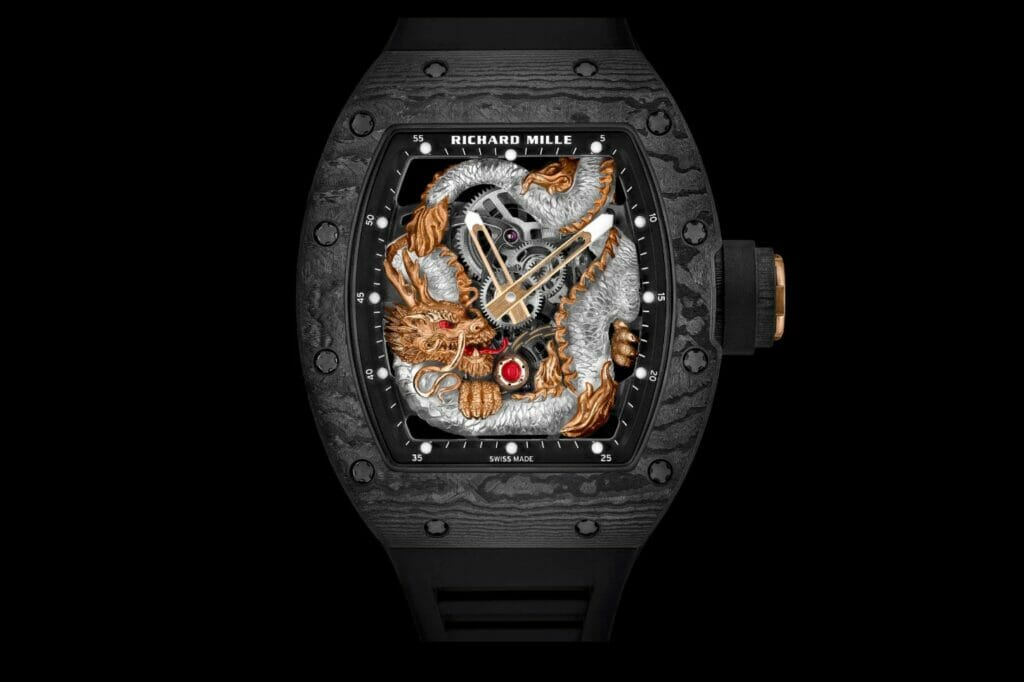 Feel the power of the dragon coursing on top of your wrist with this magnificent timepiece from Richard Mille.
Wednesday, September 18, 2019 By Jx Chong

The dragon is a mythical beast that has long captured the imagination of ancient Asian cultures and serves as a symbol of perseverance and success. Thus, it is a fitting centrepiece for Richard Mille’s limited edition RM 57-03 Tourbillon Sapphire Dragon timepiece of which there are only 55 pieces and it is only available in Asia.

Like the fantastical creature it is based off on, the engravers at Olivier Vaucher – a major name in engraving in Geneva- has beautifully captured the charisma of the fantastical creature as it encircles the manully-wound Calibre RM57-03 tourbillon which has 48-hour power reserve. All of this action is captured within a 42.7mm carbon or sapphire (limited to just 5) case which has a 50m water resistance.

To engrave the dragon Olivier Vaucher and his team developed a new hand-polishing and finishing technique to enhance the transparency of the sapphire. There is incredibly detailed work on the dragon’s head and feet with red gold painted on to accentuate the crystalline texture of sapphire.

Sapphire is a special material for Richard Mille as it is used to craft some of the watchmaker’s most complex cases and movement components. While Richard Mille sapphire cases are generally ground, on this occasion the technique was set aside in favour of laser micro-cutting, performed using a specific machine to this project.

Drawing back to the philosophy of Yin and Yang, the dragon encapsulates the Yin element of the piece its shimmery scales appear like water flowing through the dials. This is offset by the gold trims of the dragon and the Sun-like red jewel piece that represent the Yang.

The extreme skeletonisation of the grade-5 titanium RM57-03 calibre clearly reveals the minimalist baseplate to create a new perspective of the movement and its gears.

Truly, Richard Mille’s dragon inspired timepiece is a natural addition to its collection as it marries tried-and-tested traditional techniques with technical innovation.