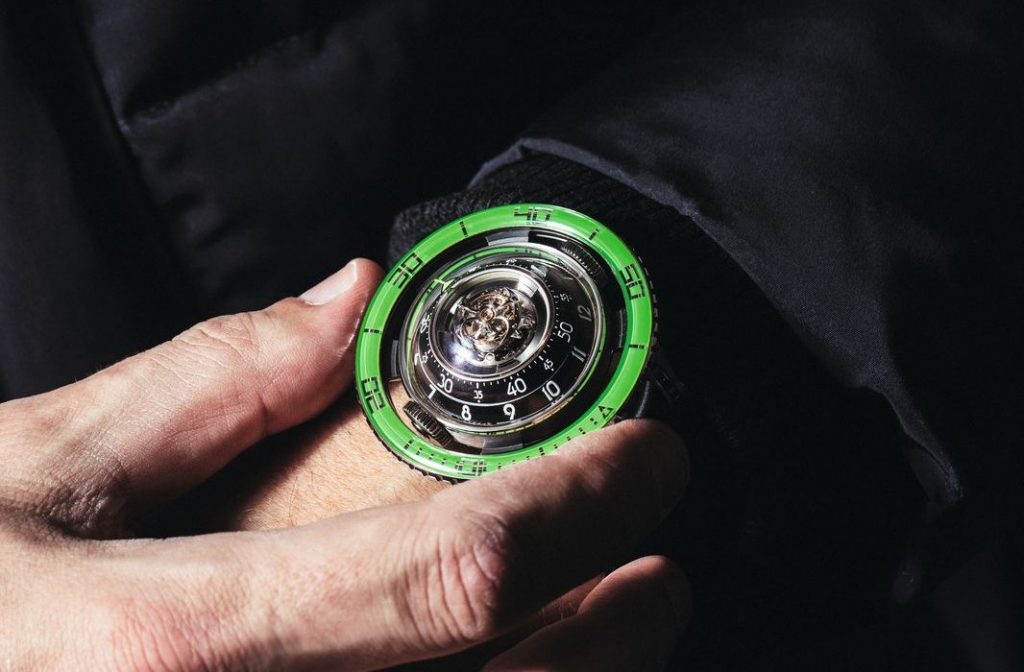 Even if you just have a casual interest in fine watches, you probably know MB&F. Here, our cheat sheet to one of the leading brands in independent horology.
Monday, June 18, 2018 By Editors

A brief history: Founded in just 2005, Maximilian Busser & Friends (aka MB&F) has become a cult favourite, and is widely recognised as one of the forerunners – and one of the most successful examples – of independent watchmaking today. Design and production work is often done with the help of external partners, hence the “& Friends” portion of its name.

Profile of the HM7 Aquapod Titanium Green, which takes its design inspiration from jellyfish.

Shown here in titanium, the HM6 Space Pirate has a biomorphic design with four spheres at its corners.

Destination Moon, a table clock made by MB&F in collaboration with Swiss high-end clock specialist L’Epee.

Currently known for: The brand has established a reputation for creating watches with quirky designs that belie their technical complexity, and this applies to both cases and movements. A somewhat unusual direction that Busser has taken is to have limited production for each new model – once the “final edition” of a timepiece is released and sold out, it will only be available via the pre-owned market.

Key product lines: MB&F has three main “collections”, with distinct models within each one. The HM (Horological Machine) line has wristwatches with futuristic designs inspired by science fiction and Busser’s childhood; the LM (Legacy Machine) collection reimagines traditional pocket watches as how they’d be made today by Busser; and Performance Art pieces consist of clocks, sculptures, and other large artefacts.

Price range: From about MYR 250,000 for the LM101 in gold to approximately MYR 1.7 million for the HM6 Space Pirate in platinum and sapphire.