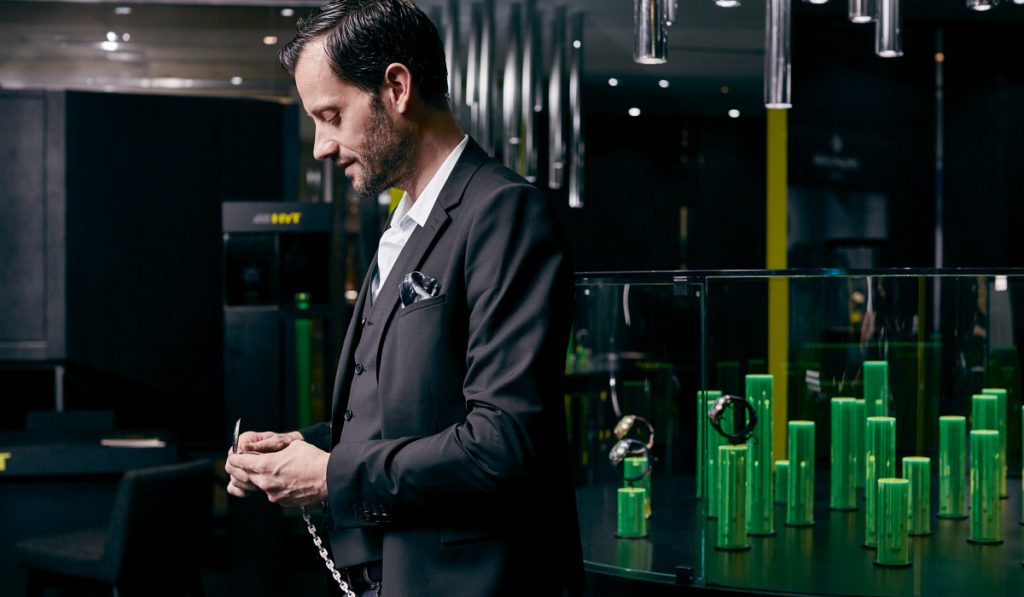 Just going with the flow.
Wednesday, September 13, 2017 By Maya Michael

“This is actually my second time visiting Malaysia; my first visit was back in September 2016, when we decided to accelerate some developments at the boutique in Starhill Gallery. We’re really happy with the Malaysian market… it’s a good place for HYT,” says Grégory Dourde. Despite battling jet lag, the CEO of HYT was more than eager to meet with selected members of the local media to discuss the watchmaking company’s latest novelties for 2017.

For Dourde, the journey to becoming a leader of the avantgarde watchmaking company has certainly been an interesting one, filled with various trials and tribulations. Shortly after graduating from the Ecole National des Ponts & Chaussées in Paris with a degree in engineering, a chance encounter at a seminar led him to meet with then CEO of Cartier, Dominique Perrard. According to Dourde, it was this encounter that would ultimately open his eyes to the fascinating world of watchmaking, which would lead to work opportunities with big names such as Cartier, Calvin Klein watches and the Swatch Group.

But, like all good things, the initial sparks of excitement eventually began to fade away as time wore on. It was because of this that Dourde decided, about a decade ago, to take on a new challenge by starting up his own consulting firm that counted HYT as one of its clients. “I became bored of the traditional ways of the watchmaking industry. Once you start to really observe the evolution of the big watch brands, it can all start to feel a little too predictable.”

To this, Dourde added: “Most of today’s watchmaking innovations have, in fact, already been invented centuries ago, which includes the ubiquitous tourbillon. Of course, there have been improvements, such as the precision of watches as well as the creation of new complications and materials… but it’s always been a variation of an existing theme. So, what you are really seeing on the market are just interpretations of what has already happened in the past. This is why some brands are trying to shake things up from within, because they understand that you cannot build a future based solely on what has already happened.”

After establishing his consulting firm, Dourde found himself taking on a new role as the CEO of Preciflex for three years before moving on to HYT. As the sister company of HYT, Preciflex is responsible for manufacturing the extremely complex fluid modules that bring to life the watchmaker’s futuristic timekeeping creations. “Anyone can claim that they want to innovate, but what HYT has actually achieved is to create something that has never been done before in this industry and, unlike the other complications that you will find in the market, ours was created entirely from scratch. All the other watchmakers wanted to keep liquids outside of the watch, but what we managed to do was combine them together. In a way, it’s like a marriage between two different worlds. Besides liquids and mechanics, we have also integrated light into our timepieces, which requires an energy source to work. Once you put all of that together inside a watch, it becomes even more interesting because these elements usually do not mix well together.”

A glimpse of the illuminating Skull Pocket by HYT that was revealed during this year’s SIHH.

As for what else the future bodes for HYT, Dourde is adamant that there is still plenty of room for creative exploration. “The bar has been set very high, and we have several patents in place to protect our micro-fluid technology that we have been developing over these last five years. For us, it’s about creating something fresh and new, while simultaneously challenging the existing status quo, and this goes beyond just changing the shape or using different materials. Once you wear a HYT creation, you not only start to perceive time differently, but the flow that displays the time can also serve as an indicator of how exactly you are spending your time throughout the day. To us, this provides an added value proposition for our loyal customers because they are no longer dictated by numbers… instead, they’re just going with the flow.”

For those who yearn for an exclusive and unique contemporary timepiece to call their own, all this can be made possible via HYT’s Bespoke department. First introduced back in 2016, the service offers two levels of customisation that will enable watch aficionados to realise the hydro-mechanical wristwatch of their hearts’ desire.

If you can dream it, HYT will build it. This ‘no-holds-barred’ option includes anything from customising and reshaping the components, to building an entirely new movement.

This module allows customers to personalise the appearance of their favourite HYT timepiece by modifying some of the existing components or materials.