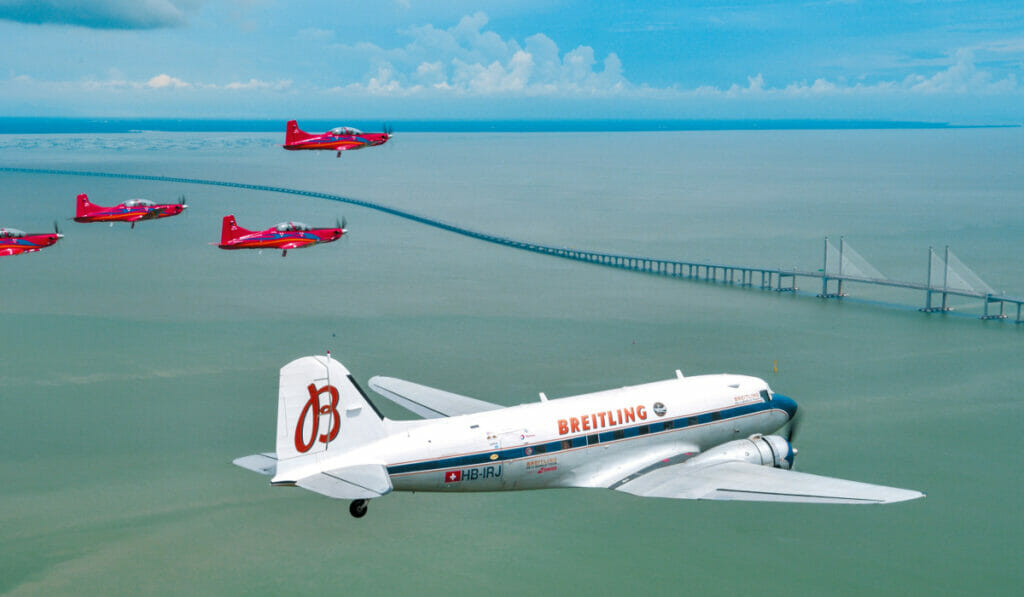 It’s the oldest plane to circumnavigate the globe
Thursday, September 7, 2017 By Maya Michael

On a muggy Saturday morning, a select group of guests and members of the media converged at Subang SkyPark Terminal to join a spirited adventure onboard the legendary Breitling Douglas DC-3. Piloted by Francisco Agullo and Paul Bazeley, the twin-engine propeller aircraft had touched down in Malaysia as part of an attempt to become the oldest airplane to circumnavigate the globe. During this six-month grand world tour, the aircraft would travel to 28 countries and 55 cities, with Switzerland being listed as the final destination to coincide with the adrenaline-packed Breitling Sion Air Show. At the time of its arrival in Malaysia, the aircraft had already clocked in an astonishing 74,500 flight hours – an impressive feat considering that most planes this age would have already been put out to pasture.

An archive photo of the Douglas DC-3 in flight

First manufactured by the Douglas Aircraft Company in 1936, the DC-3 is universally recognised as the greatest airplane of its time. Equipped with two powerful propeller engines, it played a significant role in making air travel both popular and profitable. According to Captain Agullo, the maiden flight of the Breitling DC-3 took place in 1940, at a time when the world was preoccupied with the ongoing crisis of World War II. “This plane was used to carry troops from north-east Canada to the United Kingdom. During one of the trips, the commander was informed that a German U-Boat had been spotted off the southern coast of Greenland. They decided that if they found the boat, they would open the door hatch and drop hand grenades to sink the enemy.”

Although the troops never did end up finding the boat, Agullo states that the anecdote showed the versatility of the aircraft. Tens of thousands of DC-3s were said to have been built during the war and, when it ended, the planes were sold off to various commercial airlines. As of today, it is estimated that there are fewer than 150 flight-worthy DC-3 aircrafts remaining in existence.

Upon first glance of the Breitling DC-3, it’s easy to see how this plane has touched so many millions of lives. The distinctive rounded body and rugged landing gear of the plane herald to a simpler time when travelling by air was considered a life-changing event. Once inside, passengers would be greeted by stark interiors, with padded chairs, square windows and wooden trimmings. But the best seat in the house would be the cockpit, which comes fitted with an old-fashioned instrument panel that would probably intimidate even the most experienced pilots of today.

As the sun finally broke through the clouds, the sounds of the propellers roaring to life drowned out everything else, indicating that it was finally time for lift off. Nagging feelings of trepidation eventually melted away as the plane began to soar through the clouds, passing by various iconic landmarks of Kuala Lumpur which included stunning views of the iconic Petronas Twin Towers sparkling in the sunlight. After 15 minutes of coasting the blue skies, the plane eventually made its grand descent to the tarmac, where it gracefully landed with barely a whimper while the grateful passengers within erupted in applause.

As a way to commemorate the Breitling DC-3 World Tour, the Swiss watchmaker has unveiled a special Navitimer Breitling DC-3 that will travel onboard the plane throughout the duration of the tour. Limited to just 500 pieces, powering this aviation chronograph is the manufacture Breitling Caliber 01, while the caseback features an engraving of the Breitling DC-3 World Tour logo. Each watch will also be delivered with a special certificate signed by the flight captain. If that isn’t akin to owning a piece of aviation history, we don’t know what is.