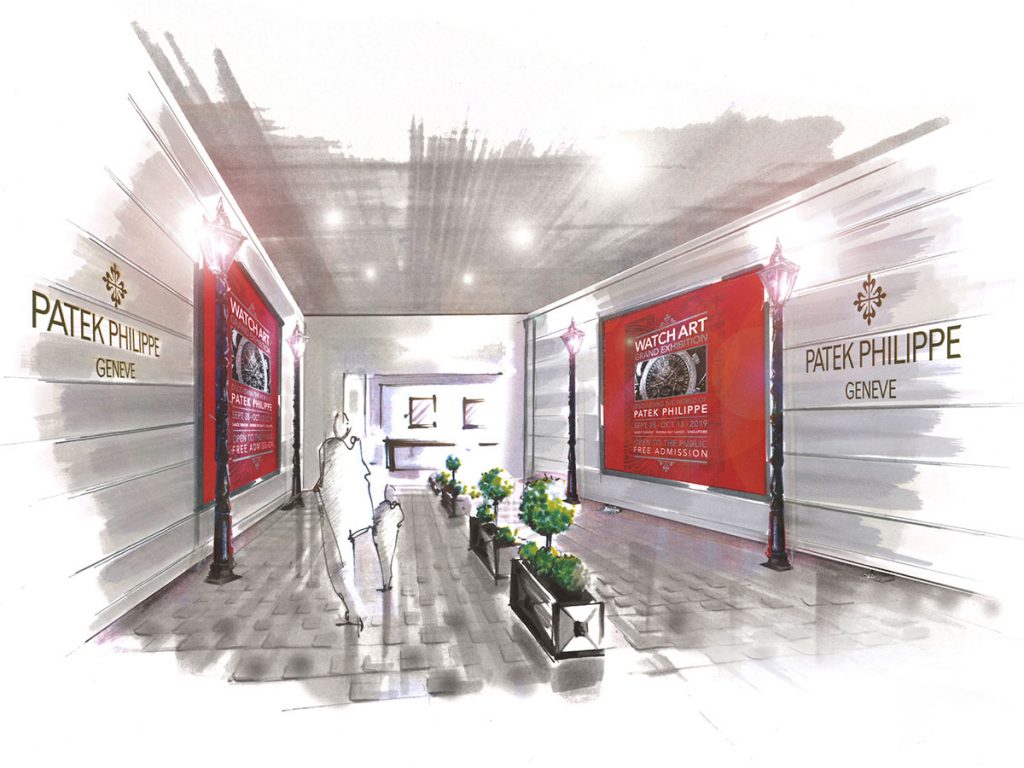 Aficionados of haute horlogerie are in for a treat as Patek Philippe will be bringing its world to Singapore as it holds its Watch Art Grand Exhibition at the Marina Bay Sands Theatre this September.

Timed to coincide with the Singapore Bicentennial year, the exhibition is scheduled to be held from September 28 to October 13 and will be the largest edition of the event ever charted by Patek Philippe, boasting the grandest number of timepieces ever to leave their home on the Lake of Geneva to be showcased abroad.

The Patek Philippe Museum or Plan-les-Ouates, has never ceased to stun watch aficionados with its 500-year-old tales of haute horlogerie, retold by some of the rarest pieces in the history of Swiss watchmaking. Having toured Dubai (2012), Munich (2013), London (2015) and New York (2017), these rarest of timepieces are finally making their debut in Southeast Asia.

Concept sketches of some of the thematic rooms of Watch Art Grand Exhibition.

Within the expansive 1800m2 floor space, visitors will be able to immerse themselves in the world of Patek Philippe and explore 10 theme rooms, each with its own distinctive ambience. This includes the Rare Handcrafts Room where artisans demonstrate watch decorative techniques and the Napoleon Room where an ambitious display of Lake Geneva in motion-picture spirits its visitors away to the birthplace of Patek Philippe. The core of the exhibition, however, is the Museum Room. Like the manufacture’s museum in Geneva, the Museum Room houses two departments, one for the Antique Collection and the other for the Patek Philippe Collection.

Expect to find in the Antique Collection some of the oldest portable watches ever made, including a Nuremberg-made drum watch that dates to 1548. Visitors will also get to see the most sophisticated Patek Philippe timepieces from 1839 to date in the Patek Philippe Collection, among which are the first Swiss-made wristwatch crafted in 1868 and Patek Philippe’s legendary Calibre 89 with 33 complications that had stood as the world’s most complicated portable mechanical watch for over 25 years since its introduction in1989.

The exhibition will also be highlighting the cultural dynamics of Singapore and its neighbouring countries in Southeast Asia with the addition of the Singapore and Southeast Asia Room, where a glimpse into the land’s history, culture, art, and natural surroundings is provided through a selection of exquisite timepieces, each with a story that evokes the region. Among them are a Genevan pocket watch that depicts the port of Canton in miniature painting on enamel, the Patek Philippe dome table clock decorated with the “Thai Ornaments” motif in cloisonné enamel infused with silver spangles, and two Patek Philippe pocket watches once belonged to King Rama V of Siam.

Amazingly down-to-earth despite its grandeur, the exhibition is open to the public for free. Visitors must first reserve their free tickets on the official website prior to their visit. Opening daily from 10 am to 7 pm from Sundays to Thursdays and 10am to 10 pm on Fridays and Saturdays, the event has also designated 2 family days, October 6 and 13 with children’s activities catered to the younger enthusiasts.

The exhibition will feature some of Patek Philippe’s most complicated watches, including the Calibre 89
(first pic), which features 33 complications, and the Sky Moon Tourbillon 6002G010 (seen here with both its front and reverse dials), one of the brand’s most complicated wristwatches.