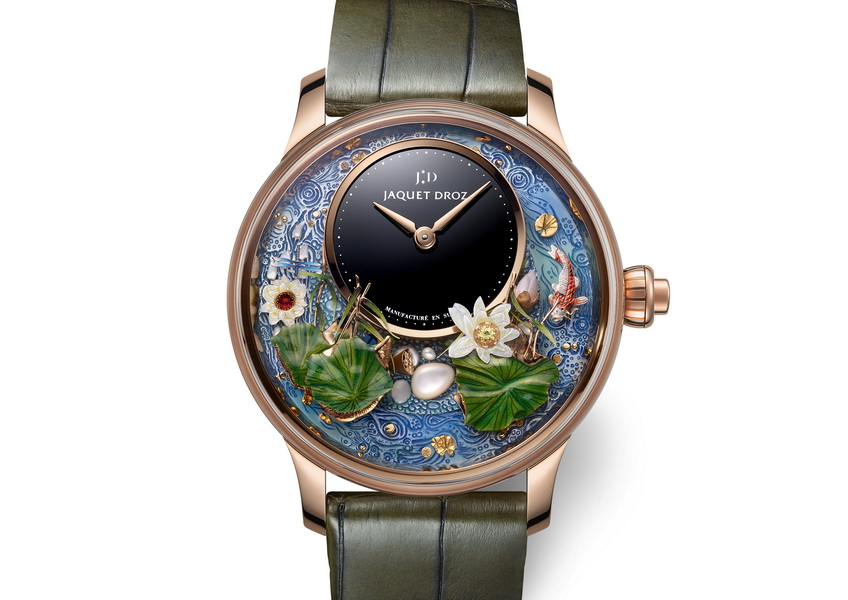 The classic Swiss watchmaker breathes life into this luxurious showcase of fauna and flora living in an animated Zen garden.
Tuesday, June 18, 2019 By Jx Chong

How does a watch capture the imagination of a user? While some watches just tell the time, Jaquet Droz’s Magic Lotus Automaton definitely tell a story.

The brand had invited members of the media for an intimate session in Kuala Lumpur with its new collection of watches that were recently shown at its Time to Move roadshow in Switzerland last month.

As one of the last brands to keep the tradition of automaton watches alive, the latest Magic Lotus Automaton is the perfect follow up to the previously released Bird Repeater (2012) and Charming Bird (2015).This truly mesmerizing automaton follows Jaquet Droz’s deep heritage of creating intricately detailed timepieces that marry craftsmanship, technology and art.

Nature itself appears to be a source of inspiration for this timepiece as it lets user peak at a Koi pond from above. Within it are hand-engraved elements that make up the scene. This includes a white lotus that “grows” throughout the four seasons which symbolises the cycle of life: birth, childhood, adulthood and finally death.

The attention to detail is staggering as the white lotus, which has a precious stone in his heart, seems to float across the water with the flow of time.

As the lotus rotates and drifts under the water lily’s leaves, the stone in the centre alternates between a yellow sapphire, blue sapphire and ruby four-times within one rotation. This results in a movement that is different every time it is wound and is never the same.

The other moving element in the automaton is of course the hand carved Koi itself. Not only does it look like a real fish but it also moves like one too as it moves its tail and even has vertical movement, giving the appearance that it is swimming up and down through the water.

Last but not least is a little dragonfly, that doubles as the power reserve indicator for the automaton. When fully wound, it will fly and eventually land on the lily pad once it is depleted after four minutes.

Despite the complicated mechanics within the timepiece, the Magic Lotus Automaton is neatly encased within a very wearable 43mm case featuring two elegant hands against an onyx backdrop. Lest we forget, this is an actual watch. It features a Jaquet Droz 2653 AT2 self-winding mechanical movement and boasts a generous power reserve of 68 hours.