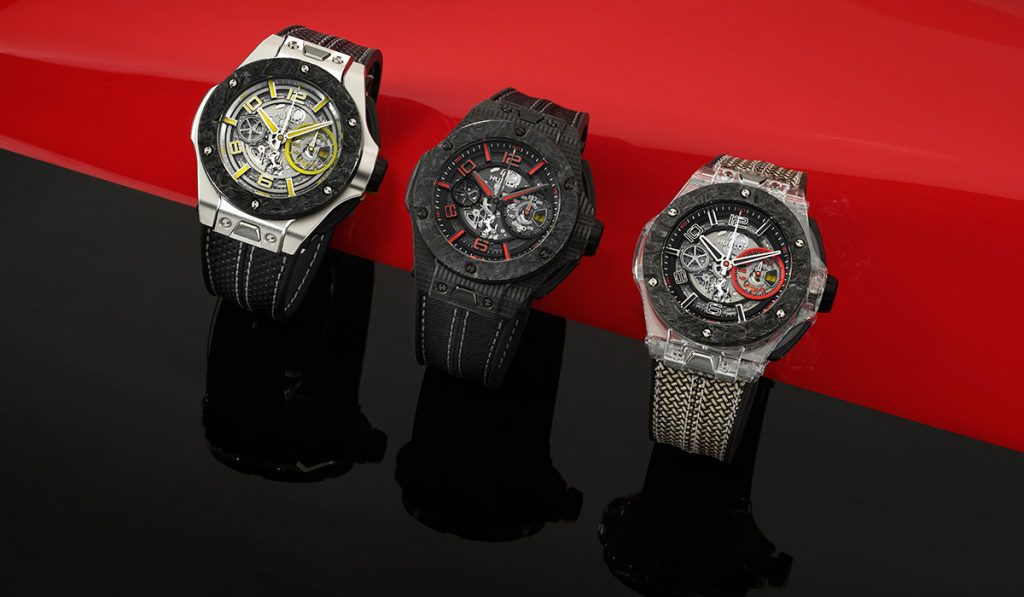 Hublot has elevated their innovative spirit to the next level with a diverse range of timepieces that were released this year, each symbolic of a mark in the brand’s history. Despite entering the realm of Haute Horlogerie later in the game, the Swiss-watchmaker has since carved itself a strong reputation which closely follows the brand’s philosophy ‘Be First, Different and Unique’. They are considered visionaries with the invention of the ‘Art of Fusion’ technique combining gold with rubber.

Dating back to 2011, the alliance between Hublot and Ferrari have brought to the world such unique pieces as the ‘Techframe Ferrari Tourbillon Chronograph Carbon Yellow’ and the ‘MP-05 La Ferrari’.

Drawing inspiration from the early years of the team, the first version of the 90th Anniversary watch are represented in its vintage, speedometer dials, with a platinum case and stitched perforated strap to evoke the peccary leather seats of the old cars used. The second edition of the chronograph uses 3D carbon for the case, with the strap decorated with bright red and black stitching made from a fire-resistant synthetic fibre used in the racer’s suit called Nomex. The colours mirror the present-day Scuderia Ferrari single-seater Formula 1 cars. The final edition boasts a transparent case made from sapphire, for a futuristic style, with the strap showing off a Kevlar look to ensure the success of Scuderia Ferrari lives on past their 90th Anniversary.

Hublot has also worked with renowned French sculptor, Richard Orlinski to create the effervescent objet d’art, Classic Fusion Orlinski. A timepiece that exhibits artistic and technological genius, the folds on the case and face of the watch, miniaturised by horological precision, is meant to create a mirror effect. With a matte strap of black rubber that contrasts heavily with the diamond-set cases, this chronograph enthralls both jewellers and watch aficionados alike. Set with 54 diamonds, the bezel rests on a 40-mm-diameter case with 112 diamonds. Hosting an Aerofusion Chronograph and Tourbillon with self-winding movement and a power reserve of 42 hours, the Classic Fusion Orlinski is art in embodiment itself at the hands of Richard Orlinski.

(Related: What does it take to be a champion? Expert advice from the friends of Hublot)