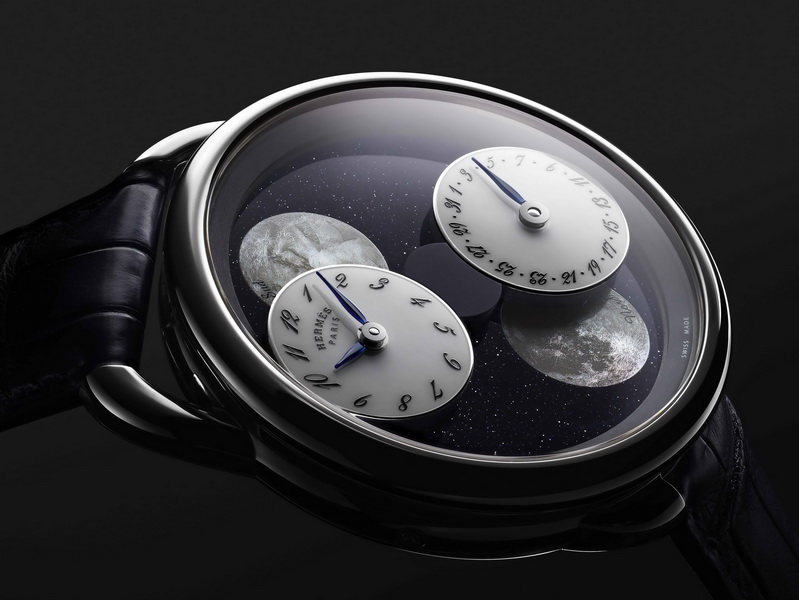 A watch that encapsulates man’s obsession with the moon.
Tuesday, July 2, 2019 By Jx Chong

Man has always been fascinated by the moon, so much so that there are timepieces dedicated to tracking the moon’s phase. While many have attempted to do so, none has come close to the elegance and a stunning display of craftsmanship as Hermès’ Arceau L’Heure De La Lune.

This 43mm white gold case watch certainly presents itself as a statement piece that is both daring and stylish at the same time. It’s distinctive for its pair of stationary mother-of-pearl moons are accompanied by a pair of lacquer dials that float above. One dial shows the hours and minutes while the other shows the date.

You may be wondering how does it work? Well, it turns out that the lacquer dials will rotate around the dials every 59 days. As it does so, the lacquer dials will cover and uncover the face of the two moons, each represents the northern and southern hemispheres. The effect allows users to tell denote the actual phases of the moon just by a glance at the watch.

According to Hermès, the Arceau L’Heure De la Lune is limited to just 100 pieces in each dial version. They are each priced at USD25,500.