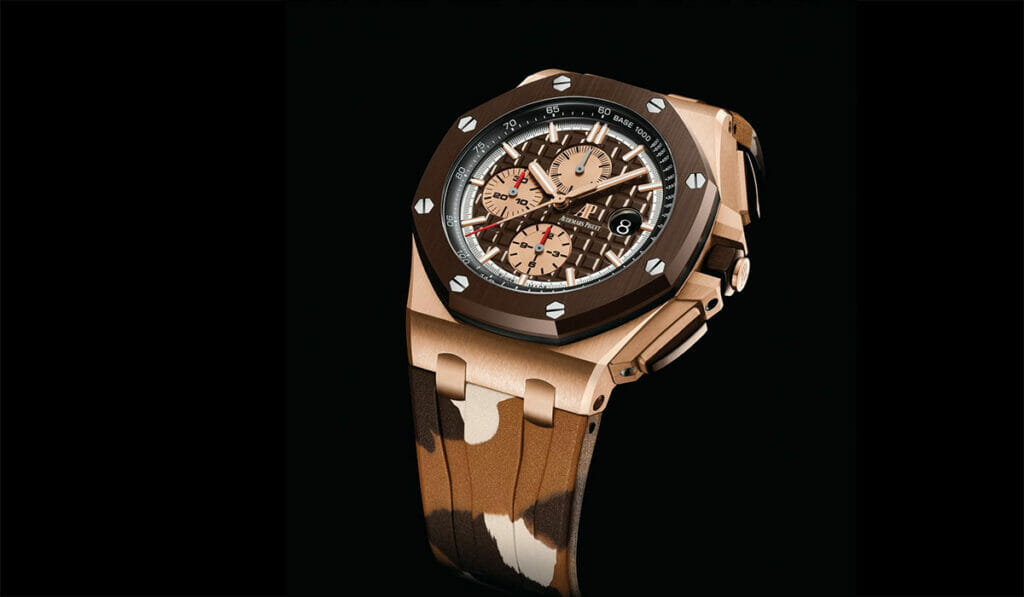 There is a segment of watch lovers that cannot get enough of military watches, whether they are vintage Rolex Submariners or new Casio G-Shocks. But these enthusiasts are not the intended audience for the latest batch of camouflage-bearing timepieces. More geared towards fashion than fighting wars, the new launches are as subtle in today’s urban environment as the brightly coloured uniforms sported by armed forces in the 18th century. (Before the advent of radio communications, a jacket in, say, vibrant red, could be easily seen amid the smoke of battle, allowing soldiers to be spotted by their commanders and avoid being bayoneted in the chest by platoon mates.)

One of the purveyors of the camo trend is Audemars Piguet, a famously bold brand with annual sales in the nine digits. Last year, the luxury brand launched a Royal Oak Off shore chronograph watch with a khaki-green ceramic bezel and a green camo strap. Even though the strap was criticised by many watch enthusiasts, the company – true to irreverent form – has followed up on that timepiece with three new Royal Oak Off shore models with camo-print rubber straps in brown, blue or green. Other watch brands that have recently adopted a camo uniform include Omega (for its women’s De Ville Tresor watches, no less) and Armin Strom.

While camouflage is currently riding a wave of popularity, the classic and once-utilitarian pattern has long been adopted by non-military folk looking to make either a political, cultural or style statement. In 1971, fashion bible Vogue printed its first story on camo, praising it as “functional, practical, good-looking”. For civilians, the first two qualities don’t seem particularly relevant, but, hey, we’d never quibble with “good-looking”.

Camo watches to look out for

Comic illustrator Stanley “Artgerm” Lau has collaborated with independent brand Armin Strom on the 15-piece limited edition Animal Instinct. A camo-print rubber strap complements Lau’s illustration on the dial, featuring a character that represents “the raw courage and independence of the human spirit”.