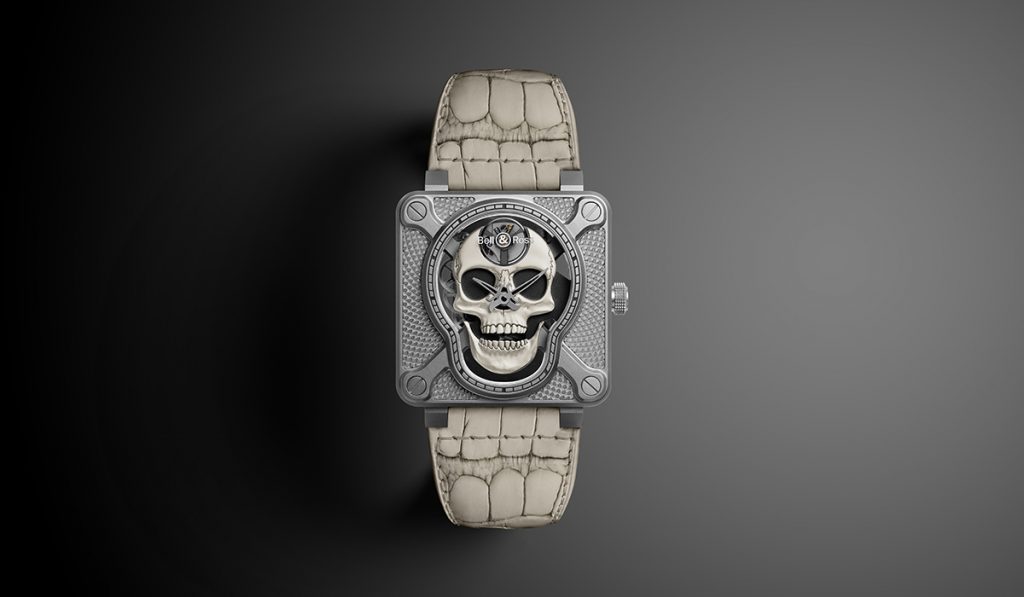 Hands down the smiling skull on the Bell & Ross BR-01 Laughing Skull is the star of this limited edition timepiece.
Wednesday, November 13, 2019 By Jx Chong

If you looking to make a statement with your timepiece you can’t go wrong with the eye-catching Bell & Ross BR-01 Laughing Skull White.

The latest addition to the Skull subset of Bell & Ross’ timepieces comes ten years after its initial launch. Over the years, the BR-01 line has evolved resulting in different variations of the familiar skull design including the BR-01 Tourbillon Skull, BR-01 Burning Skull and finally we arrive at the BR-01 Laughing Skull White.

Encased with a 46mm square case, that is made to resemble the instrument panel of an aeroplane, the BR-01 Laughing Skull White’s most striking feature is the gleaming white skull that smiles back at you from behind the clear sapphire crystal with anti-reflective coating. Two sword-shaped hands show the time and they are coated in Super-Luminova for better visibility in low light.

In case you were wondering, an ivory lacquer was applied and reworked on its surface covering the bones to give the skull its authentic appearance. Complementing the look is an ivory alligator strap that pairs perfectly with the watch.

Inside, the BR-01 Launching Skull White features an in-house movement, the calibre BR-CAL.206 that can be wound by hand. It has a water-resistance of 100 metres.

Quite possibly the coolest feature of the watch is the way skull’s jaw animatedly opens and closes as you wind the crown, giving it the appearance that it is laughing, earning it its namesake.

The BR-01 Launching Skull White is a modern timepiece that will definitely catch the fancy of pilots and aviation fans alike. It retails for MYR43,400 and is limited to 99 pieces.