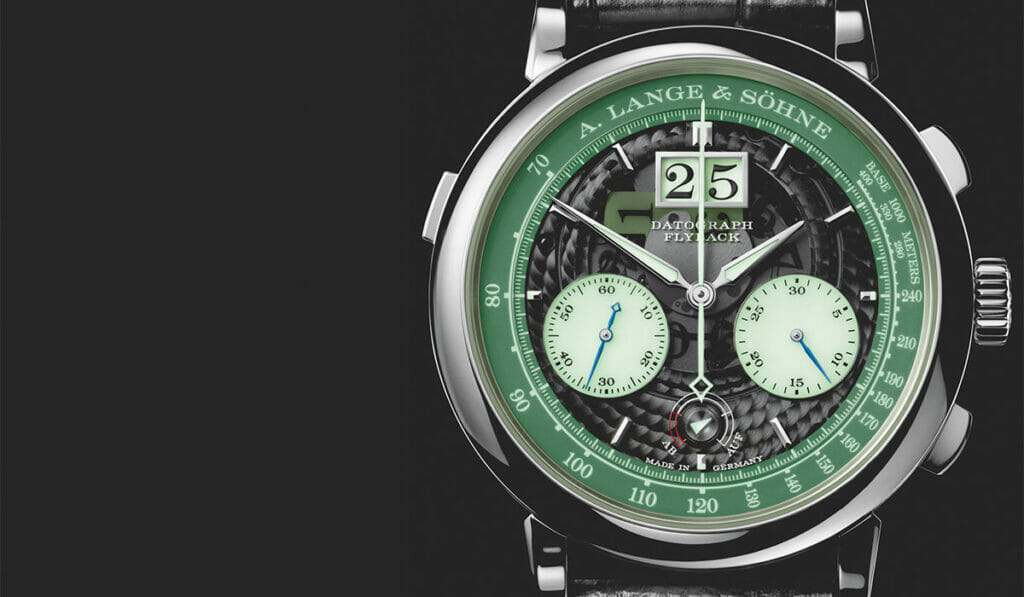 This marks the first time A. Lange & Sohne has applied a glow-in-dark treatment to a chronograph.
Monday, March 4, 2019 By Editors

WHAT IT IS:
The fourth addition to A. Lange & Sohne’s glow-in-the-dark Lumen line is the Datograph Up/Down “Lumen” – the first chronograph of the series. Like its siblings, it’s an existing model within the brand’s offerings that’s been modified to be fully usable in the dark, thanks to the generous application of luminous compounds – and then some. The highlight here is how the outsized date maintains its glow even after changing at midnight. Typically, digital displays cannot do so, since only the exposed numerals are being “charged” by light. A. Lange & Sohne’s solution involves a transparent dial with a coating that lets UV light through to charge the entire disc, even though visible light is blocked to hide most of it. This explains the smoky, translucent appearance of the dial.

HOW IT LOOKS:
The biggest change here is the dial, of course. In lieu of the finely grained, matte black dial of the original Datograph Up/Down, the “Lumen” has a greyish, translucent one reminiscent of a pair of sunglasses’ lens, which affords the wearer a peek at the movement underneath it. The real magic is revealed only in the dark, when the three central hands, two subdials, outsized date, and outer flange give out an ethereal glow to keep all its functions (save the power reserve indicator) usable.

HOW IT WEARS:
The 41mm case diameter of watch wears slightly larger than its measurement suggests, due to its lugs. We’re not complaining; shorter lugs could have made this timepiece more wearable for many people, but that would have created imbalance in relation to the bezel. The case is platinum, so expect some heft.