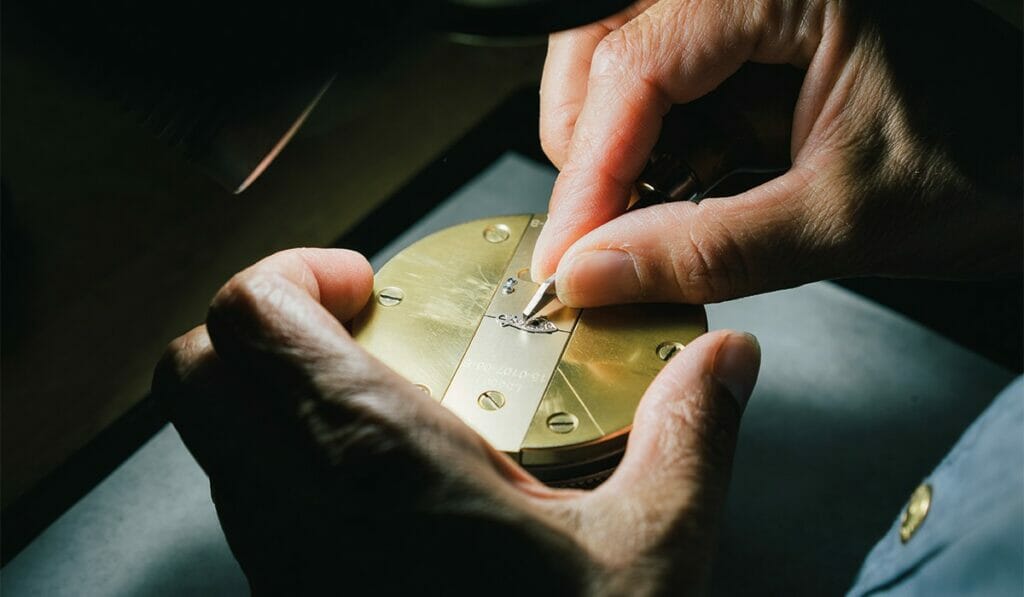 The Peak visits the brand’s manufacture in the east German watchmaking town of Glashutte.
Tuesday, May 7, 2019 By Editors

Luxury watch brands typically pride themselves on the large amount of handwork that goes into their creations. But even among a sea of names that pride themselves on crafting by hand, A. Lange & Sohne stands out. A few months ago, The Peak had the chance to visit the brand’s manufacture in the east German watchmaking town of Glashutte, three years after an expansion project saw the construction of a new 5,400 sq m building.

Typically, a watch factory visit combines a showcase of a brand’s latest CNC (computer numerical control) milling machines, and demonstrations of hand-executed manual finishing and decoration. On this tour, however, almost every activity focused on hand-craftwork and fine details, from hand-finishing to assembly. Unsurprising, for a brand that assembles each movement twice for utmost quality, and which “tries to decorate all components possible”, according to our guide. This includes even the tiniest parts – like 0.5mm- wide links resembling little specks, and that are used to create the chain in the brand’s energy-regulating fusee-and-chain mechanism. A young finishing specialist, who looked to be in his 20s, explained that each chain has 636 tiny components. After each chain is assembled, straight-graining is done, giving the top of each teeny surface a finely lined, matte finish.

With so much work going into its timepieces, do not expect Lange’s annual production of approximately 5,000 pieces to increase just because its production facility has grown. As Anthony de Haas, the brand’s outspoken director of product development, shared with us at the end of our tour: “We only face one kind of pressure from (Richemont Group chairman) Johann Rupert and (Richemont Group CEO) Jerome Lambert – to stay as good as we are, while trying to get better at what we do. Johann Rupert tells us, ‘This is the pearl of the group. Stay as you are.”

Highlights of our trip to the A. Lange & Sohne manufacture

Our first stop was the finishing and engraving department. In one room, several white-coated women worked on various components, ranging from creating the vertical Glashutte stripes that characterise the brand’s three-quarter plates (a signature Glashutte watch part that helps to stabilise a movement), to polishing tiny date correctors, using traditional wooden discs or motorised Eneska tools (pictured). Care needs to be taken especially when polishing very small parts, as polishing removes some material and taking off too much metal (we’re talking hundredths of a millimetre) can throw tolerances off.

How long does it take to put together the 684-part Tourbograph Perpetual “Pour Le Merite” movement (pictured)?

“Seven to eight weeks”, according to a chronograph specialist we spoke to at the Complications department. And guess what? After he finishes assembling one, that movement will be taken apart. Its components will be cleaned, and, where necessary, given a final decoration, before they are all put back together again. All Lange watches, whether it’s the complex Tourbograph Perpetual “Pour le Merite” or a time-only Lange 1, undergo double assembly to ensure everything is in top order. After second assembly, they undergo a final inspection, including accuracy-testing in five positions.

A. Lange & Sohne has little competition when it comes to impressive micromechanics. We were awed when a finishing specialist demonstrated the minuscule proportions of a link and a pin by placing them on a one-cent coin, against which they looked like tiny specks. It takes 636 of these components, assembled by hand, to form the chain in the fusee-and-chain mechanism that regulates the energy from a watch’s mainspring. To top it off, the assembled chain is finished with straight-graining.

A bigger component with a similarly outsized role: The 1.85mm long mainspring found in the Lange 31. Two of these springs, which are 10 times longer than conventional ones and also thicker, give the watch its 31-day power reserve.

The thumbprint of any Lange watch lies in one small component: a hand-engraved balance cock, which is a bridge housing the staff of the balance wheel. While the pattern is usually floral-based, each of the five engravers here has his or her own unique style and different engraving depths. Visitors who own Lange watches can actually meet the engraver who worked on the balance cock in their watch. After our tour, we had the chance to engrave and polish a balance cock. The result? Let’s just say that no Lange owner would want our “creations” in their watch.