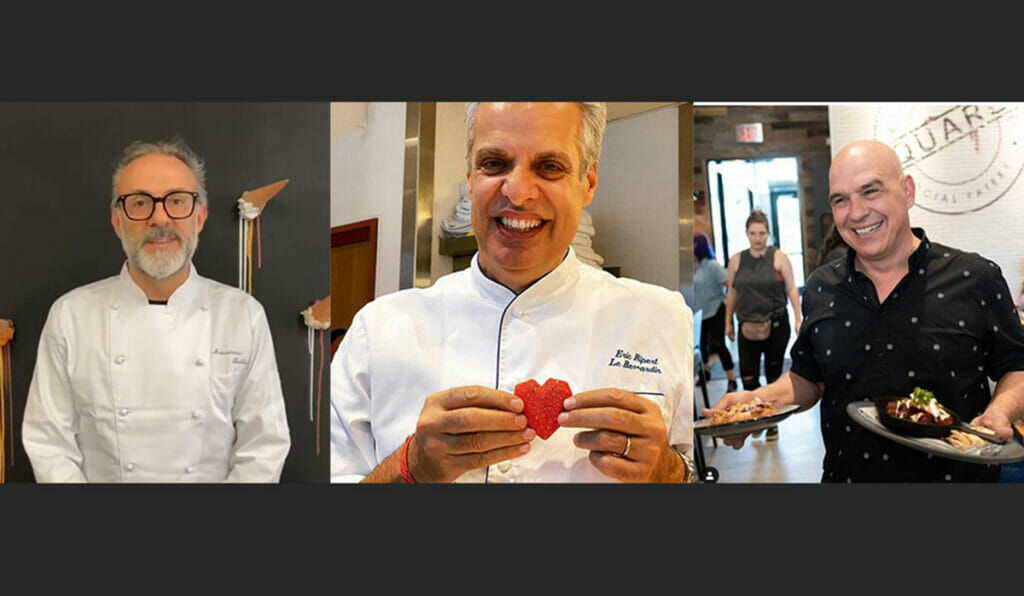 Chef Massimo Bottura, Michael Symon and Ã‰ric Ripert are offering simple cooking classes that you can follow along at home.
Wednesday, March 25, 2020 By Jx Chong

During this period of self-isolation and social distancing thanks to the Movement Control Order, many of us are forced to enter an unfamiliar room in the house. The kitchen.

While some may relish at the thought of brushing up and practising their culinary skills, what about those are not that skilled in the kitchen? What then?

However, fear not as there is no better time to sharpen your culinary skills as several world-class chefs are out to lend a hand by providing some simple classes for viewers to follow at home.

Among the many chefs who have stepped forward is Michelin-Starred chef Massimo Boturra has taken to Instagram to help those who are helpless in the kitchen.

The aptly-titled “Kitchen Quarantine” series broadcasts live from the acclaimed Italian chef’s home kitchen in Italy, which is under lockdown due to the worsening spread Covid-19 in the country.

The chef patron of Osteria-Francescana provides a step-by-step through a wide variety of dishes such as a basic Mac and Cheese, salad, tortellini and even Thai curry.

All the classes are conducted in English and completely free of charge.

This isn’t the first time Boturra has conducted cooking classes online. He previously had run a series of online cooking classes via Masterclass, an online course service that provides lessons on topics like Film & TV, Culinary Arts, Writing and more.

A little chili for sunday supper… pick a meat (whatever you have) or use eggplant to make it veg!..this one takes a little longer than the other dishes but I promise it's worth it!… hope you guys find it as comforting and delightful as I do.. as always tag @foodnetwork @chefsymon and #SymonDinners in your social posts so the rest of our little daily dinner community can check it out…see you tomorrow at 5 pm est on facebook live @foodnetworkkitchen …& good news: we are going to do ANOTHER 10 days of #SymonDinners afterwards!…excited to keep cooking w you guys ?â€?

Boturra is far from the only chef who has taken to social media to distil his culinary knowledge. American chef and restaurateur Michael Symon has kept himself busy by showing hungry viewers the ins and outs of preparing dishes such as pork chops and black beans, lentil stew and many others.

EASY CHICKEN SOUP We kept the bones and skin of a roasted chicken (previously enjoyed)and : 1:simmered w 1 1/2 quart of water for 1 hour 2:filtered and discarded bones 3:broke spaghetti in 1 inch pieces into boiling broth 4:when almost cooked I added leftover chicken,andouille,tomato and zucchini 5:then added leftover cooked rice and stirred 6:plated It was very tasty .May it inspire you?