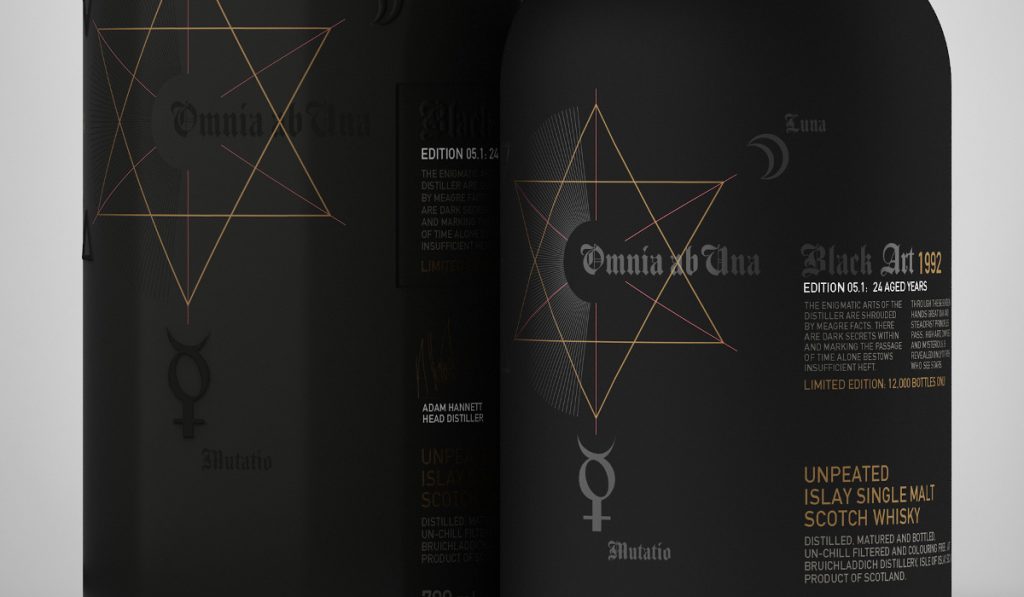 The Peak samples the latest addition to the Bruichladdich family – Black Art 5.1 – a dram so sublime it almost makes you wonder if pure sorcery was behind its...
Wednesday, July 5, 2017 By Joanna Lee

The fifth iteration of the most mysterious single malt of Bruichladdich is the first creation of the brandâ€™s new Head Distiller, Adam Hannett, ever since Master Distiller Jim McEwanâ€™s retirement. The Black Art 5.1 shares the otherworldly, impenetrable, dark and minimalistic packaging of its predecessors â€“ enclosing a liquid gold of legendary cuvÃ©es. It shakes off the heady and rich earthiness of the Black Art 4.1, while maintaining its mystical charm.

Drenched in rich antique copper, its profile unravels delicate threads of luscious fruit notes, such as cherry, mango, apricot, damson and orange citrus. The notes are cushioned in oak, soft brown sugar, vanilla and syrup-dipped figs. Different notes will waft with every inhalation, as the depth of flavour evolves. Perfect for those calming nights when you wish to seek pleasure in the finer things in life. You can sit with the Black Art 5.1 for an hour and it still wonâ€™t cease to surprise you by unveiling new facets with every fresh sip.

We managed to catch up with Brand Ambassador of Bruichladdich, Murray Campbell, who shared a sneak peek into life at Bruichladdich, the innovations of the distillery and the best memories that heâ€™s had with whisky.

Asia Pacific Brand Ambassador of Bruichladdich, Murray Campbell, was first introduced to the brand by his grandfather and uncle, the latter who used to be the General Manager at Bruichladdich.

How did you get into Bruichladdich?

My uncle, who worked at Bruichladdich in 1974, and my grandfather knew I liked whisky. When Bruichladdich closed in 1994 and reopened in 2001, they sent me a leaflet asking if I wanted to buy casks. At first I said no, even though I shouldâ€™ve said yes. But ever since that day, I was aware that Bruichladdich had reopened and I used to keep an eye on them for what they were doing in this and that market through the Internet. Then, in 2009, I was in Shanghai and my uncle told me about a whisky event called Shanghai Whisky Live. Two of his colleagues were going to Shanghai for this event and he asked me if I could help them get around. He also asked me to help stand at the booth for two days. So, I did that and I introduced some whiskies, and it was great. At that event, we had a couple of meetings with importers into China. In the end, those meetings werenâ€™t successful, so we could not find an importer. This was 2009 in China and it wasnâ€™t a mature whisky market. People only wanted to bring in the big brands; they didnâ€™t want to bring in the smaller Islay brands that no one knew of. So, I said to them: â€˜If you canâ€™t bring an importer, Iâ€™ll get some money together and Iâ€™ll import your whisky into Shanghaiâ€™, and I would run around the Shanghai bars trying to sell it. I went back at Christmas and the sales director said: â€œMurray, we really appreciate your enthusiasm. But â€“ donâ€™t do that. Instead, we would like to offer you a jobâ€. So, basically they had me in Shanghai as the Regional Sales Manager.

What makes Bruchladdich stand out?

What are the highlights and challenges as Bruichladdichâ€™s Brand Ambassador?

Highlights? Thereâ€™re no highlights, just challenges! No, no, of course thereâ€™re lots of highlights. I think, just from a job perspective, it appears glamorous on the outside but, in reality, itâ€™s a difficult task. Lots and lots of travelling, which mean youâ€™re away from your friends and family a lot, itâ€™s very busy, very tiring, but thatâ€™s the challenge, Iâ€™d say. I think the good part is that the whisky industry, as a whole, is full of very positive, innovative and great people. I very, very rarely meet someone in this industry who isnâ€™t friendly, happy or outgoing. Thatâ€™s one of the best things about it.

What are the emerging trends or new developments in the whisky industry?

Every country you go to, thereâ€™re different stages of single malt appreciation or understanding. So, if you go to a place like Japan and Taiwan, which have had single malt whisky for a very long time, their trends would be different compared to, say, Malaysia, which still holds quite as many brands as other countries. Thereâ€™s no one trend thatâ€™s going around because things are global. Obviously, Irish whisky is getting to be really popular, as are whiskies from other countries; some small-scale bourbons are coming back, but thatâ€™s not all over the place, probably in places like Australia, the UK and America. In Malaysia, I donâ€™t think itâ€™ll happen for a couple more years.

Are there any new innovations Bruichladdich is working on?

Weâ€™re always innovating. Always playing around with different casks â€“ moving things from one cask to another just to see what kind of flavours can be brought out. For example, there was this time I was home for Christmas. I went into the warehouse, and I saw some guys pouring whiskies into casks and I asked them what they were doing. They were taking some seven- or eight-year-old Port Charlotte from bourbon casks and putting it into chardonnay casks. It was a very strange thing to do, but weâ€™re doing it because we want to see what results that would bring. And that kind of thing is happening all the time, so later, when we introduce the 25-year-old (Black Art 5.1), thatâ€™s also something similar, taking from one cask to another to another, just to see what the new flavours these casks would bring. Because weâ€™re a small distillery, weâ€™re flexible; we donâ€™t have to plan something two years in advance. If weâ€™ve got something just sitting there and with enough stock to do a small release, we could think â€˜this tastes really good, people will want to try thisâ€™.

What can we be expecting from Adam soon?

Well, the 5.1 is the first thing Adam has done on his own, like he picked all the casks and everything. I think thereâ€™ll be a 6.1 maybe end of this year or next. I would also say that, although officially Adam has been Head Distiller for the past year, the years before that, when Jim McEwan was travelling all over the world, he was there doing the stuff. This would just be him continuing whatâ€™s been done â€“ innovations, when the time is right, and not just releasing products for the sake of it.

What are some of the fondest moments youâ€™ve had with whisky so far?

Two occasions stick out â€“ one was last year, when we took a group of people to Islay. On the first day, we dropped off our bags, jumped into the minivan and drove to the beach with our picnic baskets. So, there was this huge, long beach thatâ€™s 2km long, and thereâ€™s no one else around. It was a beautiful day, with the big waves crashing and it was freezing cold, we walked and sat in the sand, with the sun. We opened the picnic basket and we had whisky and, in that situation, it tasted amazing. But probably any whisky in that situation would taste amazing â€“ everything was so amazing and relaxing. Another time was in the whisky warehouse in Islay â€“ if you come to the island, you must make time to drink whisky in a whisky warehouse â€“ it was dark and cold, and itâ€™s windy and you can hear the rain hitting the walls, the doors… you have any whisky in that situation and it would just feel incredible.

Where do you see Bruichladdich in 5 years?

Our Port Charlotte stocks in five yearsâ€™ time will be quite healthy and I think weâ€™ll see some older Bruichladdichs that weâ€™ve got now in the range of 15 year olds as a core product.