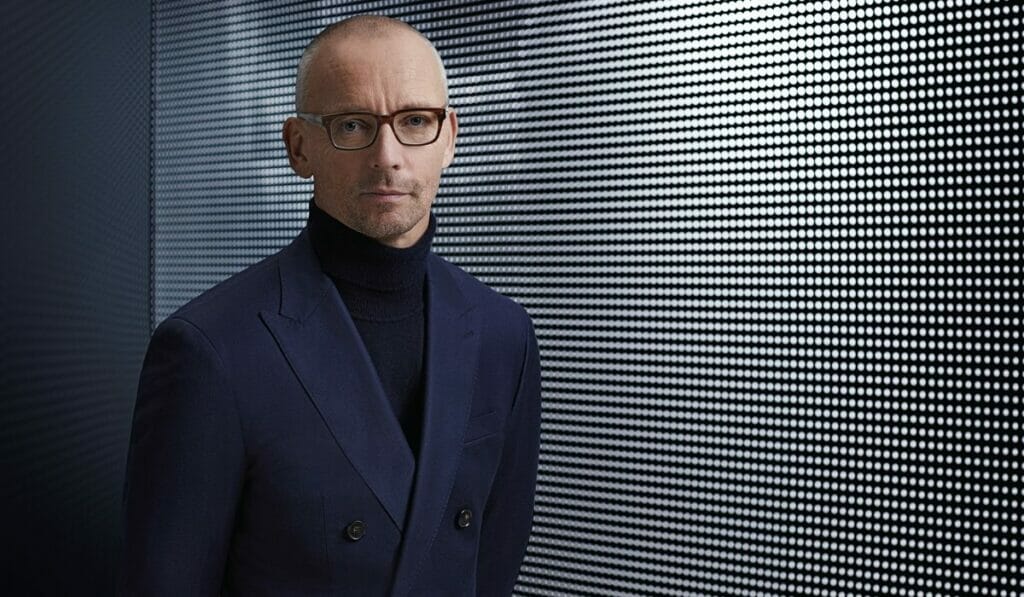 The stage is set as we enter the revamped Boss store at Marina Bay Sands for our interview with the labelâ€™s chief brand officer, Ingo Wilts. Firstly, of course, the brandâ€™s latest repositioning is conveyed through the boutiqueâ€™s new look â€“ its light-coloured wood and splashes of bright colour feel warmer and more homey than its previous, coolly dark interiors. Our next indication of the changes that have been afoot at Hugo Boss is the way in which Wilts â€“ a lanky German national with a boyish smile â€“ and his female assistant are dressed. While he sports a long-sleeved pullover, track pants with sporty racing stripes down the side, and white sneakers, she is dressed in a relaxed grey suit with flat shoes.

Wilts, who would later that evening attend the brandâ€™s gala fashion show in a navy suit, recalls what he thought was most pressing when he rejoined Hugo Boss in 2016, in what is the menswear veteranâ€™s fourth outing with the company. He says: â€œI thought the biggest need was to make the brand more modern and sophisticated.â€ Over the past three seasons, he has shown what that means through menswear shows at New York Fashion Week. Instead of the clearly distinct suits and sportswear that used to make up the Boss menâ€™s collections, his runways â€“ like that of many of todayâ€™s fashionâ€™s front runners â€“ blur the line between work and play. Think relaxed trousers with drawstring, or a baseball shirt paired with sharp tailoring.

Some 1,000 guests, Hollywood stars Chris Hemsworth and Sebastian Stan, home-grown swim champ Joseph Schooling, and a runway featuring the Fall/Winter 2018 Boss menâ€™s and womenâ€™s collections: This was the winning recipe that went into celebrating the reopening of the Boss boutique at Marina Bay Sands. Held in May, the event also signifies another strategic shift for the brand â€“ Boss will begin staging co-ed fashion shows, showcasing its menâ€™s and womenâ€™s collections together, from September this year.

Also among his plans: bridging the menâ€™s and womenâ€™s offerings. While some see the recent departure of well-regarded American fashion designer Jason Wu from the brand as a sign that Hugo Boss is moving away from womenswear, this isnâ€™t the case, says Wilts. â€œWe still want to increase womenswear for sure, but there will be a shift. Jason has done a great job over the last few years. But we face a new chapter with our customers. We realised that when we brought our womenâ€™s pieces closer to our tailored offerings, they were much more successful. We want to bring the menâ€™s and womenâ€™s pieces closer, in terms of aesthetics.â€

Wilts, who is also a member of the managing board of the multi-billion-dollar premium fashion retailer, has been one of the key figures behind its restructuring over the past two years. It has been shifting away from initiatives that began around 2013, when the brand sought to diversify its offerings, expanding into the luxury space via bespoke and made-to-measure services, and growing its womenswear division with Wu at the helm. Not all these changes were well-received by the market. Coupled with the uncertain global economic climate of the mid-2010s, Hugo Boss saw its share value drop more than 40 per cent from 2015 to 2016.

Today, Hugo Boss is strengthening and streamlining its offerings, and its revenue and share price are up. Instead of multiple lines such as Boss Black, Boss Green and Boss Orange, it now has a clear two-brand strategy: There is the dressier mainline Boss, and the younger and edgier Hugo. But what Hugo Boss stands for remains, essentially, the same. Says Wilts: â€œWe have always stood for the suit, so we want to build our brand around the suit. The suit business is still important, but you need to give the customer a new way of wearing the suit. In the past, it was formal, with a shirt and tie. Now, you can wear a suit with a T-shirt or sneakers; or take treatments that come from casual clothing, such as garment-dyeing, or fabrics from athleisure, such as jersey, and use them for suiting. The idea of what a suit is has changed.â€