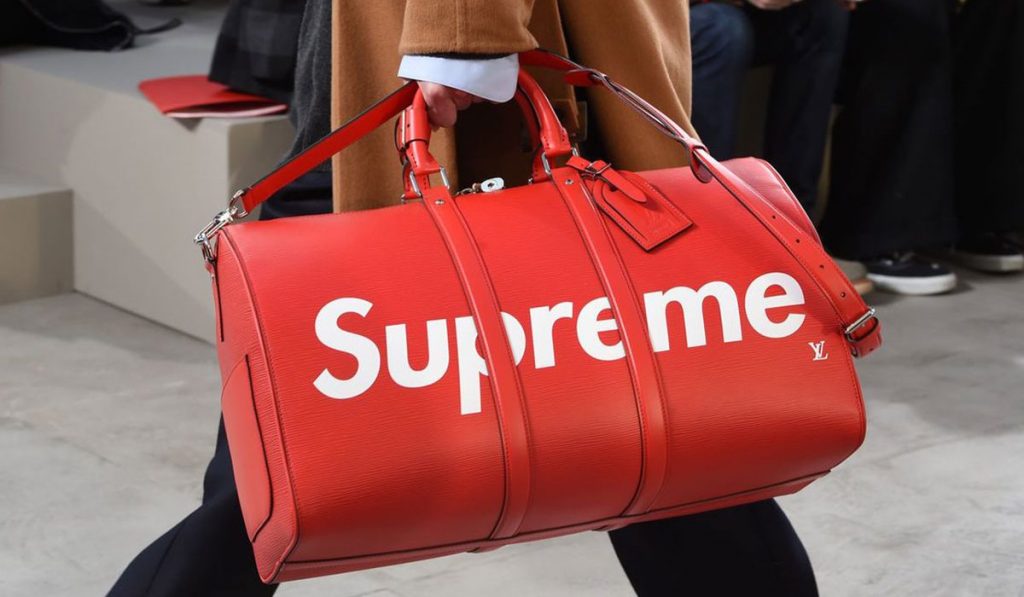 One doesnâ€™t often get fashionable socialites, designers, musicians and young influencers together in the same room, but, again, it also isnâ€™t every day that Louis Vuitton launches a collaboration with a streetwear brand.

In late April, the French luxury house unveiled its collection with Japanese niche label Fragment Design at a launch party at local high-end streetwear boutique Surrender in Singapore. Among the 400 guests was long-time Louis Vuitton customer and social-scene regular Dana Cheong. She deems the party â€œincredibly successfulâ€ and tells us that she was â€œpleasantly surprised by the overwhelming response of the guests that eveningâ€. Think packed spaces, and long queues to enter the venue or even to pay for purchases.

Fragment, best known for its popular sneaker collaborations with brands such as Nike, isnâ€™t the only streetwear brand that Louis Vuitton is working with this season. Next month, the latter will unveil its even more talked-about partnership with American street- and skatewear brand Supreme. The Louis Vuitton and Supreme collection includes leather goods, clothing and, of course, a skateboard â€“ mostly emblazoned with a red-and-white monogram combining the logos of both brands. Itâ€™s hard to believe that 17 years ago, Louis Vuitton had sent a cease-and-desist letter to Supreme for using its monogram â€“ without permission â€“ on a series of skateboards and apparel.

FINE FUSION This Louis Vuitton X Supreme duffle bag resembles the nylon ones made by Supreme, but is rendered in Louis Vuittonâ€™s Epi leather.

MORE THAN A SUBCULTURE

Clearly, a lot has changed in the past two decades. Also in attendance at the Louis Vuitton X Fragment party was Nicholas Cho, the 30-something co-founder and director of strategic planning for local streetwear company Flesh Imp. He notes that the scene has greatly evolved since Flesh Imp first got its start in 2000: â€œThe general perception of streetwear back then was that it was very young, casual and rebellious. But the next few years saw streetwear mature and gain mass acceptance as a culture that was here to stay.â€

With the shifts that have taken place in street fashion, it isnâ€™t always easy to define what it means. Daniel Todd, buyer for online high-end menswear store Mr Porter, offers: â€œStreetwear goes back to the streets, from skater culture to hip-hop and rock â€™nâ€™ roll. It is about spirit and attitude, and making simple pieces such as hoodies, sweatshirts and sneakers into expressive mediums that convey your beliefs.â€

While streetwear, with its counterculture character, has always had a certain cachet among younger consumers, it has in recent years also gained a significant presence in the world of luxury fashion. Beyond collaborations with traditional premium brands, there has been palpable growth in the high-end streetwear category once dominated by players such as Japanese brand Bape or Y-3 (a collaboration between avant-garde Japanese designer Yohji Yamamoto and Adidas).

Here on our shores, for instance, 2016 saw the introduction of premium streetwear brands Off-White (whose clothing prices start from around US$400, or S$557, for a T-shirt) and Christian Dada. Both brands are operated by local company Dâ€™League, which also owns Surrender and distributes Richard Mille watches in Singapore. In a story that ran in March, Surrender executive director Jozette Ho told Singaporean media – The Straits Times – that Off-White and Christian Dada had been â€œperforming 30 and 50 per cent above expectations, respectivelyâ€.

Moving further into mainstream territory, streetwear has also been leaving its mark on traditional fashion brands. One of the leaders of this style shift is Demna Gvasalia, head of design for both the hallowed house of Balenciaga, as well as edgy label Vetements. Hailing from the former Soviet republic of Georgia, Gvasalia has been putting a twist on Balenciagaâ€™s traditional tailoring with his brand of streetwear-influenced daring. The brandâ€™s Fall/Winter 2017 collection, for example, included coats with exaggeratedly broad shoulders, as well as padded coats bearing Kering logos â€“ a nod to, or perhaps a dig at, Balenciagaâ€™s parent company.

On why he thinks these elevated-casual pieces are so popular, Todd says: â€œThey are easy to wear and to style, and are versatile, making them great investment pieces.â€ With the lines between formal, sporty and casual dressing increasingly blurring, streetwear-inspired styles can fit easily into the wardrobes of its fans, who according to Todd tend to be â€œthose who work in creative fields or have a more relaxed and adventurous style when off dutyâ€.

Cho of Flesh Imp ticks both boxes. Despite his streetwear background, he is also a fan of â€œformal tailoring and dressier stylesâ€. He says: â€œWe have been putting dressier elements into our streetwear pieces. I like to mix things up a little, and when I am in a suit, I will throw on a T-shirt and sneakers. When Iâ€™m in â€˜streetâ€™ clothes, I might add a nice jacket or shirt to complete the look.â€

At a time when retailers are trying to figure out what makes millennials tick (and open their wallets), it is clear that many creators of high-end fashion see incorporating streetwear influences as a way to make their brands more appealing to a new generation. Cho, who eventually got a Louis Vuitton X Fragment cardholder (two bags that he had had his eye on sold out quickly at the launch party), believes that this is an effective move that can help luxury brands â€œconnect to and retain the attention of fashionable youthâ€.

He muses: â€œStreetwear culture has always been anti-establishment and rebellious. These traits seem to be the very elements that luxury brands are attracted to. For a brand, itâ€™s a constant challenge to keep your audience engaged and your concepts fresh. While collaborations like these might not bring in the sales volume â€“ because they are produced in limited quantities â€“ they create the noise and get the attention of the younger crowd who find relevance in brands they connect with.â€

LOGO MANIA This Givenchy T-shirt brings together an oversized logo and a photo print of a sunset sky.

What might be less obvious, however, is that creating new products with these younger, edgier brands can also give established names a rejuvenating boost that reinforces their appeal to existing clients. Dana Cheong, for instance, picked up a beret and mobile phone pouch at the Louis Vuitton X Fragment event. â€œThe collection was a breath of fresh airâ€, says the mother of two millennials aged 20 and 24, adding that these joint efforts are a win-win exercise. She adds: â€œThese collaborations can help to connect a younger audience to brands like Louis Vuitton, while introducing existing luxury clients to a different world of fashion.â€

Despite having infiltrated mainstream consciousness, streetwear today still has the power to shock â€“ and not always in the way you expect. According to LVMH watch head Jean-Claude Biver, when shopping in New York with his 16-year-old son, â€œHe showed me new brands Iâ€™d never heard of, but were very expensive. I was very surprised that such young kids were buying such expensive things. A Bape shirt for a few hundred dollars â€“ Bape, or Palace or Off-White. At those prices, how could those young kids buy? I was amazed.â€