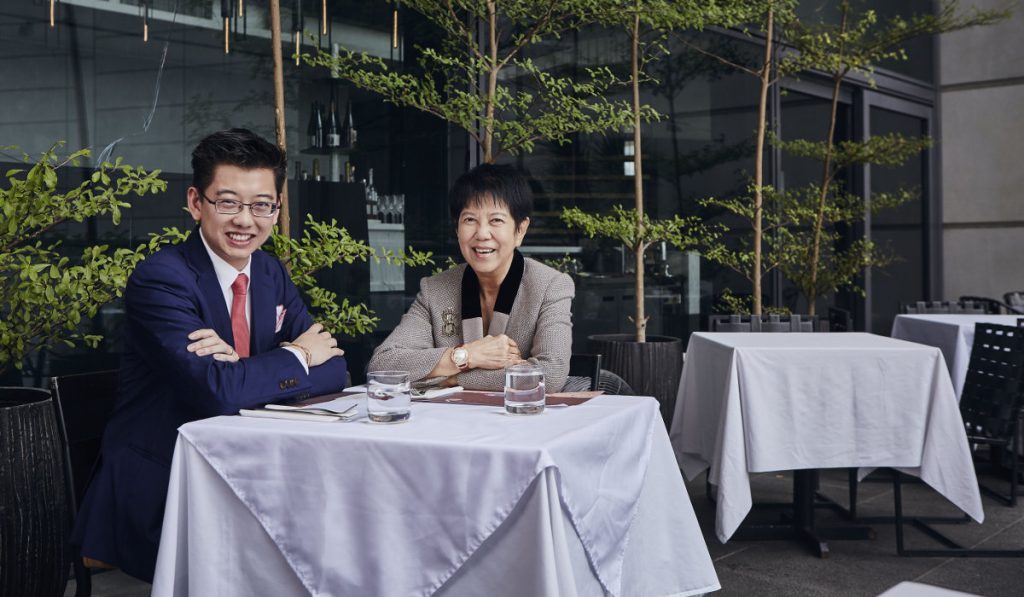 Tell us how you met.

VINCE CHONG (VC): It was a serendipitous encounter that started as a solicitor and client relationship when I was assigned to assist on her case.
CHAN MO LIN (CML): When I first met Vince, he was a first year legal assistant with a law firm in Kuala Lumpur that I had engaged to take legal action against a defendant. I dealt with the principal partner of that firm and Vince was assisting him. When Vince left that law firm, I called him up and asked if he would like to join us. He had already received offers from bigger law firms, so I wrote to him saying that, with his personality and dedication, heâ€™d make it anywhere. In the end, he decided to join us. That was four years ago and, in January this year, we decided to make Vince a partner in the firm, heading our litigation department.

Based on your experience, what are the most important attributes of a successful mentorship?

CML: For a successful mentorship, both parties must basically hold the same values in life and share core beliefs. For my generation, there was no such thing as seeking a mentor. The only thing that came close was if I admired someone and wanted to follow in their footsteps, I would emulate what they do and look to their life as a guide. There would be no interaction where you actually ask that person for guidance â€“ perhaps it was because we were too shy to ask. The new generation is more proactive about this approach.
VC: It is a melting pot of attributes. I think that honesty has to be at the top of the list: but it is not just plain honesty here; there is a certain amount of frankness where both parties must be able to speak their minds and know that doing so would not be met with ridicule; a two-way street where there would be times the mentee thinks the mentor is too old school, while at times the mentor would think the mentee is too new school. Both must be able to carve out the time for each other, no matter how intense or busy the schedule gets. The mentee must be able to receive criticism; the mentor must naturally be able to manage the constant challenge of ideas that the mentee would put onto the table. Both must naturally have the patience to deal with the other.

Vince, why did you pick Ms. Chan as your mentor and what has been the greatest lesson that you have learned from her?

VC: While there is a movement in todayâ€™s generation to actively seek out a mentor, especially in business, itâ€™s really up to the mentor to decide whether to provide the aspiring mentee with guidance, whether it be in business or life. It was, therefore, Ms. Chan who picked me to be her mentee. However, there was never a formal moment when we established our mentorship; it just happened quite naturally. Itâ€™s comforting to know that if Iâ€™m ever in a pinch, I can reach out to her, and sheâ€™ll be frank with me because if you canâ€™t do that, the relationship is not going to go anywhere. As for the greatest lesson that Iâ€™ve learned from her, it would have to be the sum of many lessons, really. It all adds up to how to be a better lawyer, legal advisor, business counsel and boardroom strategist; all while maintaining the highest standards of decorum and professionalism.

What is it about your mentor/ mentee that you admire most?

CML: What strikes me about Vince is that he displays maturity well beyond his age. During our solicitor and client relationship, we spent long hours interacting with each other, which was when I discovered how he was full of candour, plus working with him was easy and pleasant because of his great EQ. But what made the biggest impression on me was a conversation we had that took place nearing the court hearing. To give you a bit of a back story, the defendant had sent a proposal of a settlement for a sum that was far lower than what I was willing to accept to settle out of court. Although he knew we had a strong case, Vince advised me to settle. His reasoning was that, although the offer was far lower than what I expected, I also had to consider the repercussions of this case on my health and emotions. He strongly influenced me to accept the amount offered so that I can put the matter behind me and move on. He truly had my best interest at heart, which he obviously placed above the additional legal fees he could have billed and earned had the matter proceeded to trial. I took this as a valuable lesson that fighting for more money may not justify the price one has to pay emotionally.
VC: Ms. Chan has numerous admirable attributes: the sharpness of her legal mind; her innate ability to slice through the fluff of any given conundrum; her eloquence, sense of ethics and fair play. But most important of all is her ability to always remain full of heart and filled with passion for life. Essentially, she is everything I aspire to be one day.

Any tips for our readers who might also be looking for a mentorâ€™s guidance?

CML: If you want to pick someone as a mentor, you must at the onset have an admiration for that person. This can be their principles, the way they conduct themselves or the way they approach issues in life. It may or may not be someone from the same industry as you are in, but one of the common factors would be in sharing the same core values.
VC: I do believe that there is an element of serendipity. That said, I do think that one must never be afraid to ask for advice from a potential mentor. In seeking said advice, it is also important to be open, forthcoming and frank, for a relationship can only begin from these fundamentals.

What do you think are the major qualities to have in achieving success in both business and life?

CML: I believe that the pursuit of financial success in business alone, with complete disregard to the importance of family and personal life or at the expense thereof, renders a person a dismal failure. Having wealth alone without a balanced work-life eventually leaves a void. Apportionment of effort, time and commitment to both business and personal life is essential to achieving success in the true sense of the word.
VC: From the perspective of legal practice, it would be to never compromise on the quality of the work that you are producing. There is no situation where you are allowed to cut corners simply to make a quick buck. One has to be able to produce excellent, practical and dependable work, where a client is assured that their dilemmas are in capable hands and ensure that oneâ€™s practice is always professional and ethical. Every client expects legal advice but thatâ€™s the easiest part. What is difficult, but must be strived for, is in ensuring that that legal advice is excellent, thoroughly thought through, practical and effective â€“ in essence, one that gives value to the client.