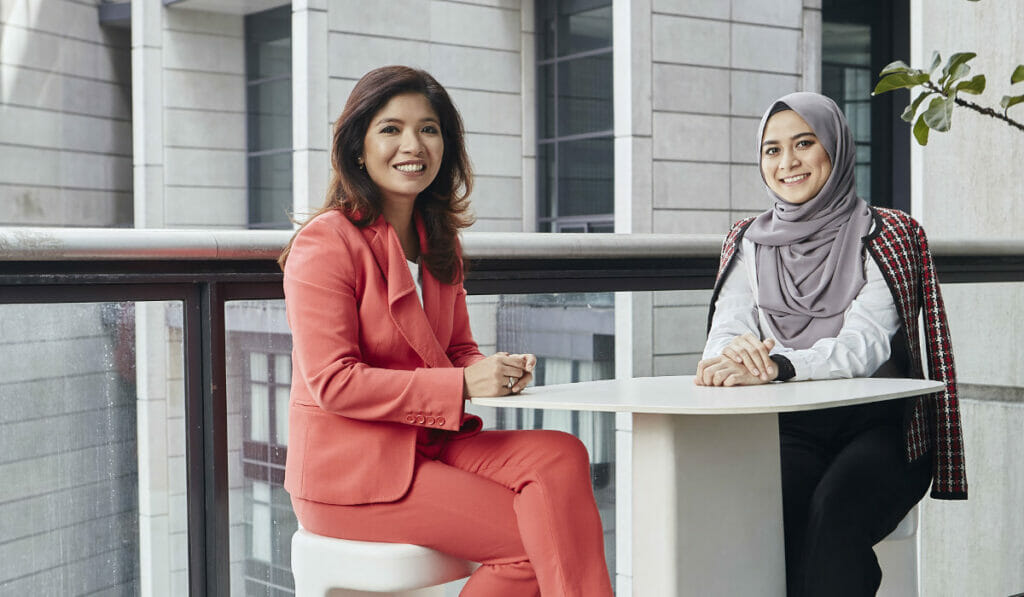 Tell us how you met.
Rejina Rahim (RR): Since 2011, I have been mentoring local university students under McKinseyâ€™s Youth Leadership Academy. I was looking for a new marketing executive and sought the help of one of my previous mentees from the 2012 cohort, who was kind enough to put Nadia in touch with me. Despite being a fresh graduate, she wowed my team members and they hired her!
Nadia Ismadi (NI): I first met Rejina during the finale of the leadership programme hosted by McKinsey. Back then, I did not have the opportunity to introduce myself and was only formally introduced to her during my first day at work in Nomura Asset Management Malaysia.

Based on your experience, what are the most important attributes of a successful mentorship?
RR: Both parties must make time and focus on what they are looking for in a mentorship; it cannot be a one-way street. I have experienced many mentees who are expecting me to give them a 101 guide to what to do in their lives â€“ it doesnâ€™t work that way.
NI: Like any relationship, I believe that the general attributes of a successful mentorship include sincere intentions to help one another, common values and mutual respect.

Nadia, why did you select Rejina as your mentor and what has been the greatest lesson that you have learned from her?
NI: Rejina is someone who genuinely wants to help others succeed. If someone reaches out for advice or a favour, she will always go out of her way to help that person in any way possible, provided that it is within her capacity. Itâ€™s been said that women always compete with each other; but after being Rejinaâ€™s mentee, I find this statement to be invalid. Throughout my tenure at Nomura, I admired her agility in managing her environment, employees, regulators, shareholders, partners and so forth. She is a bold, progressive leader, especially when it comes to pushing boundaries and exploring unchartered territories to help propel business. She was also the one who taught me that failure is the stepping stone for growth; without failure, one ends up becoming complacent and contented with the status quo. She also doesnâ€™t shy away from asking for feedback when she doesnâ€™t understand something, which is something that I rarely hear other leaders openly say.

What is it about your mentor/mentee that you admire most?
RR: I admire Nadiaâ€™s drive and determination towards improving herself. Sheâ€™s not the type who settles, which is evident by what she has accomplished at such a young age! I also admire her humility, wit and strong filial piety. These attributes are becoming rare, especially in this age of individualism and self-promotion.
NI: Rejina is the kind of person who defies the social stigmas that are often attributed to successful women. Sheâ€™s able to balance a soaring career and mentor several groups of people, while being a mom to two teenage kids, a serial marathon runner and enjoying her life. I truly admire her ability to juggle so many responsibilities while excelling in each and every one of them.

Do you have any advice for our readers who might also be looking for a mentorâ€™s guidance?
RR: A mentor doesnâ€™t necessarily have to be someone you work with or from your industry or older; it can be anyone from your social circles. Mentoring might be similar to coaching, but itâ€™s a lot more personal and you donâ€™t need to prepare a game plan for your mentee. This is why itâ€™s important for the mentee to be focused and able to communicate what they are looking for in their mentor. There should not be a power play when mentoring. I have actually learnt a lot from the mentees that I have met over the years, probably more so than what I have imparted to them.
NI: When it comes to engaging with a potential mentor, my philosophy is to find ways to benefit them. People assume that mentees are the sole beneficiary in a mentorship, but it shouldnâ€™t be that way. When approaching a mentor, it helps to be upfront on any expectations you might have, so that the mentor can evaluate whether those expectations are within their bandwidth.

What do you think are the major qualities to have in achieving success in both business and life?
RR: I am constantly striving for success and have so many plans that I want to achieve. As for how I got to where I am today, it would be by having a healthy body and good mental health; being able to trust and delegate to the people you hire; and the ability to prioritise tasks. You canâ€™t possibly give it your all or perform your best if you donâ€™t feel well physically or mentally. It is also equally important to trust oneâ€™s support system, as it allows you to delegate both at work and at home.
NI: It is crucial to define your own success and remain focused on achieving your goals, especially in the digital age that we live in today, when plans are much easier to be derailed. It is also important to be open to accepting feedback. Back when I was starting out my fintech venture Save4Dream (save4dream. com), I relished receiving compliments on what a great idea it was and felt apprehensive about criticism. I eventually realised that criticism was actually more helpful than compliments because it allows us to strengthen our value proposition. Now, whenever I talk about Save4Dream, I always look forward to hearing honest feedback on how we can improve this social savings platform.