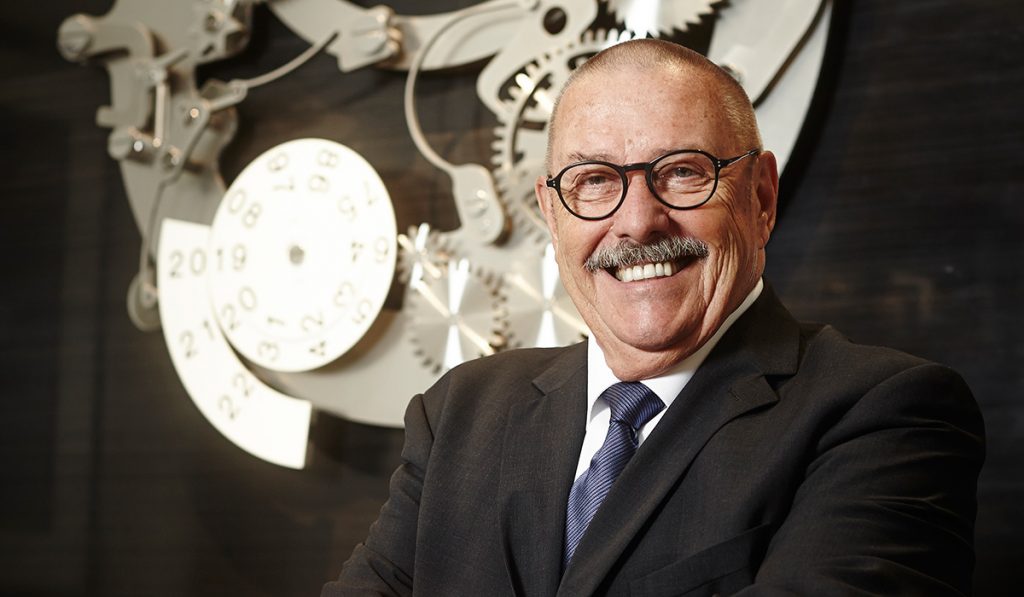 Hannes Pantli, Board Member of IWC Schaffhausen, was in Malaysia to launch the IWC Pilot’s Watches Exhibition at Pavilion Kuala Lumpur in July. The Peak speaks to him about his long legacy with the watchmaker and what this year’s Pilot’s Watch collection means for the brand.

Your career with IWC Schaffhausen goes all the way back to 1972, when you first joined as a sales delegate, and you even played a hand in bringing to life one of the maison’s bestselling lines, the Portofino. What drew you to IWC in the first place and what has kept you there all this while?

There’s a certain age in Switzerland where everyone receives a watch from his godfather. Everybody got regular watches but one boy got an IWC. We didn’t know what it was and when we asked, they said, “If you don’t know what IWC is, that’s your problem”. And I never forgot that. When I was approached by a head hunter from IWC, I said great. I gave myself a year or two because Schaffhausen is a small place.

Then, everything went down the drain because of the Quartz Crisis. The price of gold went from 5,000 francs up to 40,000 francs, meaning gold watches tripled their prices in the span of six months. We had to reorganise the whole company and I can say I saved the company from bankruptcy by creating new markets, especially in the Middle East. I arrived with a collection and went from one royal family to the next. It was very difficult but, slowly, we built up the brand again, and here we are today.

In all your time with the brand, what would you say has been the biggest change within IWC and the watchmaking industry as a whole?

I think what has completely changed is marketing because when I started, you just had print advertising and that was it. There were no events and such. We visited our customers with the collection in suitcases. Of course, this has changed completely and it has become more efficient, but I still think that, basically, not much has changed because you have to create a top product and sell it.

Walk us through your history with IWC as a collector and customer.

I had been working for three months in the factory when an elderly lady came in with a pocket watch, which had belonged to a Russian immigrant who came to Schaffhausen and sold it to her grandfather. She explained that her son didn’t like pocket watches and as she wanted to buy a lady’s watch, if I would buy the pocket watch from her. That was my first IWC watch. I’m still fond of pocket watches because they are beautiful even though nobody wears them today. When the company was taken over by Richemont, IWC’s museum was actually made up of my private collection – we didn’t have a factory collection. When Richemont discovered this, they asked me if I would eventually sell the collection to them. I wasn’t keen at first but, then, I thought it’s more logical that the watches stay with the company. So, I sold a total of 310 IWC watches to Richemont.

Tell us a little more about IWC Pilot’s Watches.

It’s really interesting because we have been making pilot watches since the 1930s, even though Schaffhausen has no airport and, before World War II, there were very few pilots. Then, I found out that the two sons of IWC’s then-owner were sent to England to study and, while there, they got their pilot license. I believe they told their father: we’re pilots now, make a watch for us. From then on, because of the quality of our watches, the German Air Force asked for pilot watches for military use, which had to be as accurate as possible. Right after the war, the first English army came and we made a watch for them called the Mark 10. Then, in the 1940s, they needed a new pilot’s watch for the Royal Air Force and the Mark 11 was born in 1947. The air forces of Australia, New Zealand, South Africa and England all used the Mark 11.

The most famous plane in the RAF was the Spitfire, so for a long time, we were dreaming of doing something with it and, finally in 1999, I launched the first Spitfire watch. We had a big event in London at the Imperial War Museum with RAF pilots and all the private owners of the Spitfire, among them Sir Adrian Swire. This year, for the new Spitfire collection, we’re attempting The Longest Flight mission. The idea came when we met these two pilots who dreamed of flying around the world in a Spitfire. We teamed up with them because the idea is really in the spirit of IWC; it is mechanical and high precision. It was a happy connection and it will be an enormous adventure because the Spitfire was built to fly 400 to 450 miles and now we’re looking at 80,000 to 90,000 miles around the world.

What can we expect from IWC moving forward?

The most beautiful watches in the world, of course!